A roundtable Discussion: British Foreign Policy is biased towards Israel 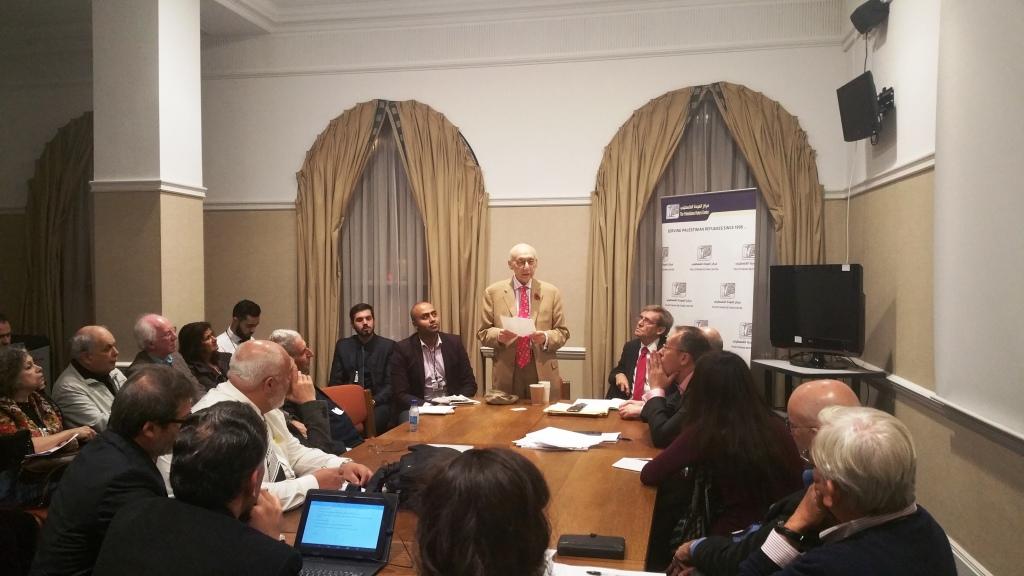 London, October 27th 2015 - A roundtable discussion was held by the Palestinian Return Centre (PRC) at the Houses of Parliament to discuss British foreign policy towards Palestine. The discussion focused on the British Foreign Policy under conservatives government from 2010 to 2015. It examined certain cases where the Government is siding with Israel. Speakers agreed on the need for the Government to recognize the British involvement in Palestine following world war 1 which has caused the displacement of Palestinian refugees as of now.


Sir Gerald Kaufman, who has been a Labour Member of Parliament (MP) since 1970, was one of the guest speakers to address the roundtable event. Firstly, the Father of the House of Commons, talked about the current escalation of violence in the oPT, emphasizing the appalling behavior of Israel’s forces towards Palestinians. Kaufman warned the audience to beware of the misrepresentations produced in our media.

During the meeting, he read a letter he recently received from a Palestinian friend. The letter revealed numerous instances where Palestinians were shot and killed without any significant proof of causing a threat. Kaufman raised the issue of extrajudicial killings that are becoming a norm but even worse he argues that Israel has gone further and is killing Palestinians and only subsequently finding methods to whitewash the murders.

The Manchester Gorton MP concluded his speech stating that “this situation [Arab-Israeli conflict] could be ended any minute” but ‘Conservative politicians are not interested that Palestinians are living an oppressed life’, so unfortunately is it is up the local people to pressure their MPs to seriously tackle the issue.

The second guest speaker of the event was Martin Linton, who was a Labour MP from 1997 to 2010 and  former Guardian journalist and editor of Palestine Briefing. Initially, Linton’s important contribution focused on the siege of Gaza as he affirmed that "[Gaza] It's a humanitarian situation with a political cause".

He added that ‘Each successive invasion and attack [in gaza] has become more brutal’. Next, Linton suggested that it is fundamental to apply economic pressure on Israel as tool to end the occupation. The ex Labour MP also explained to the audience that the Israel lobby is well funded in Britain whereas not enough support is given to pro Palestinian political organizations; most of the donations are directed to humanitarian charities which cannot tackle the root causes of the conflict.

Sameh Habeeb, Head of PR and Media at the Palestinian Return Centre, informed the audience of the fact that about 80 per cent of Conservatives MPs are members of Conservatives Friends of Israel which massively influences the government’s policies on Palestine and the Middle East. Habeeb also discussed the events leading up to the breakthrough admission of the PRC as an NGO with consultative status at the United Nations Economic and Social Council (ECOSOC). He talked about how the UK Mission to the United Nations fully supported PRC’s bid until the day of the voting when they decided to vote against the motion.

A short contribution was given by Andy Slaughter, the current Shadow Minister for Human Rights. Slaughter talked about a serious issue that needs to be properly addressed as he states ‘Senior Israeli politicians are overtly racist and not taken to task by the international community’.

Audience also participated in the roundtable and enriched the discussion with some key comments. BDS was one of the topics stated by audience where a number of them stressed on the fact that BDS is a  key to end Israeli occupation. They also criticized the government in regard of its biased policy in Palestine.

Short Link : http://bit.ly/2A5cu2u
Tags
Next Article
Join us: Seminar at Houses of Parliament:Scotland and Palestine
Previous Article
Side event on Palestinian Refugees and Challenges of UNRWA Funding at UNHRC 30s Session
Most Views
Related Posts