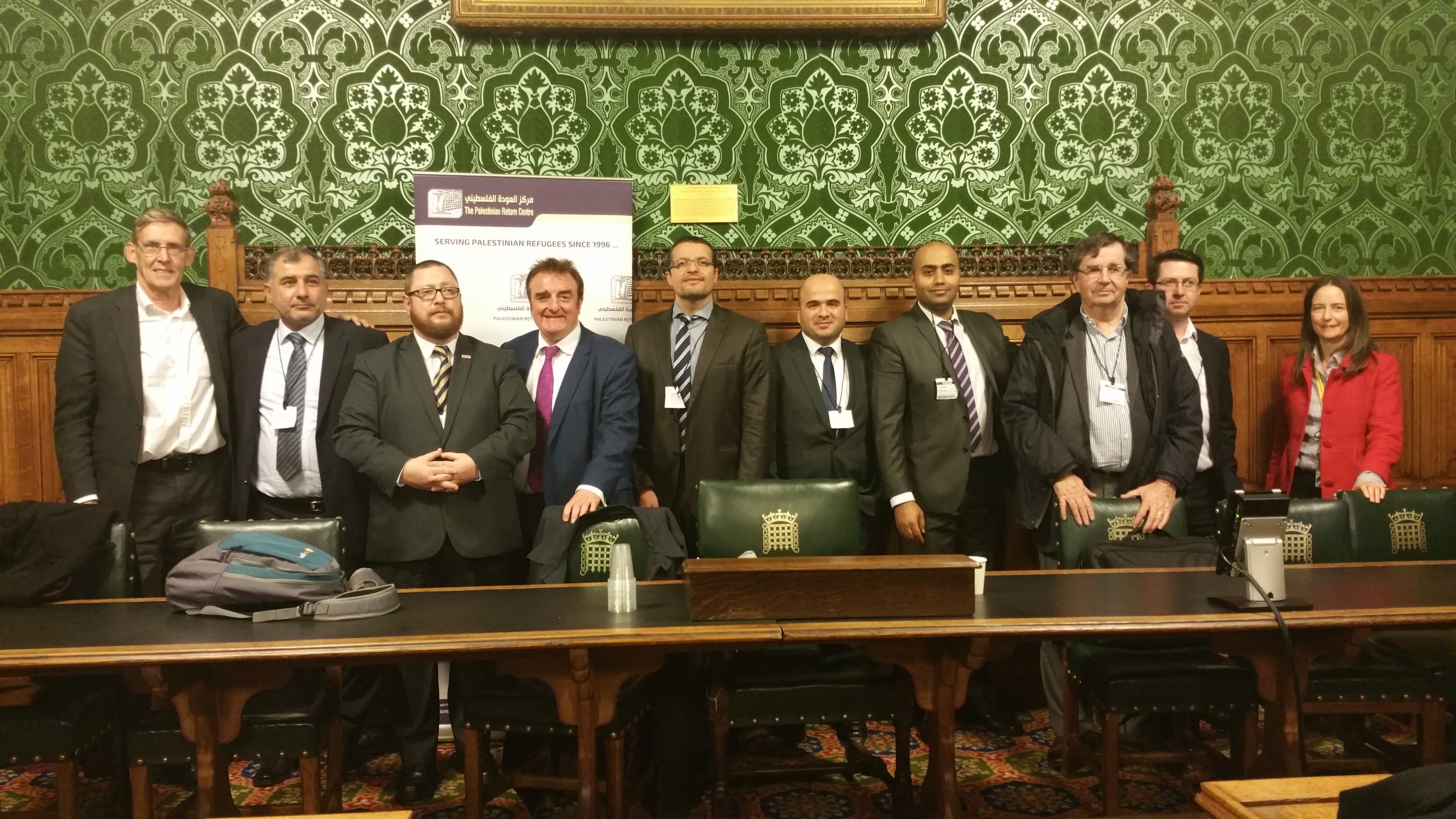 London, 17th November 2015 – The Palestinian Return Centre held a special panel discussion titles “Scotland and Palestine: Building Friendship and Solidarity” at the Houses of Parliament. The event was chaired by Tommy Sheppard MP, who is also Scottish National Party (SNP) Spokesperson in the Cabinet Office, and member of SNP Friends of Palestine.


The panel also included Karl Sabbagh, the Palestinian-British historian and writer, Andy Murray, Campaigner and Director of SNP friends of Palestine, and Professor Manuel Hassassian, Palestinian Ambassador to the UK. Chairman of the Palestinian Return Centre (PRC), Majed Al Zeer took part in the event. Members gathered to discuss how Scotland’s new presence in Westminster can be used to effectively address the Palestinian issue.

Professor Hassassian started the event with a highly powerful and moving speech. “If I could choose a people to march with me it would be the Scottish”, he began, and went on to talk of the current situation on the ground in Palestine, noting the ethnic cleansing of the Palestinian population as well as the genocide of the Palestinian culture.

He continued by talking of the disparity between his public opinion of supporting a two-state solution, but also of his private feeling that this option no longer exists, due to Israel’s settlement expansion and land grabbing behavior. He further remarked of the contentious stance of the current UK Prime Minister, in Israel defending its right as an occupying power to “defend itself” against Palestinian civilians.

PRC chairman Majed Al Zeer welcomed the audience and thanked Tommy Sheppard MP for hosting the discussion. Al zeer reaffirmed on the integral stance of the PRC on the right of return for Palestinian refugees and the need to implement as enshrined in International law and the related UN resolutions.

Author and writer, Karl Sabbagh. Sabbagh started his eloquent speech by comparing the Nakba of 1948 to the Highland Clearances during the 18th and 19th centuries in Scotland. He drew comparisons of the similarities and differences of these events, and how these distinctions affect how Scotland relates to Palestine today. Through quotes and analysis, Sabbagh showed the stark reality of the cruel history embedded in both of these societies, but also of how Scotland has prospered despite this, but Palestine still remains oppressed. He went on to say that in this unfair reality of occupier and occupied, Palestinian’s do not need even-handedness from the west, they need strong support, especially from Scotland.

Mr. Andy Murray, provided us with a personal encounter of his recent treatment at Ben-Gurion Airport. Murray had planned a trip to the Palestine, where he hoped to gather interviews from Palestinian and Israeli citizens about what they foresee the future. However, his trip did not stem past the airport. He was instantly detained at immigration of the airport in Tel Aviv, and interrogated about his intentions within the occupied land. He repeatedly asked for UK embassy representation, but was scolded at with “Big Ben isn’t outside the window”, and received no help despite his rights as a British citizen. He was placed in a holding cell ridden with bed bugs and strip searched twice; all this humiliation and he was still refused entry to the country and given a ten year ban on entering again. Murray said that his only “crime” was supporting Palestinian causes in the UK, which immigration authorities proved through surveillance photos of him in the UK prior to his departure.

The floor was then opened up to the audience, where several of the 17 SNP MPs who attended, gave powerful words on how they believe the SNP can support Palestine. The discussion was highly active and many issues were discussed, amongst those were stopping the UK arms trade with Israel, the BDS movement and the treatment of British citizens in Israel’s airports.

Amongst those who spoke Paul Monaghan SNP MP talked of his recent visit to Palestine, where he witnessed clear state terrorism and the genocide occurring every day. He spoke of incredibly high tensions across the West Bank and Jerusalem, and of his personal experience of being stopped and checked by IDF soldiers 25 times in four days.

Stuart McDonald SNP MP spoke of ways to improve the current situation, by providing those in the West Bank and Gaza with solar energy in order for them to have control of their energy, but also noting that engagement with Israeli civil society needs to be happen.