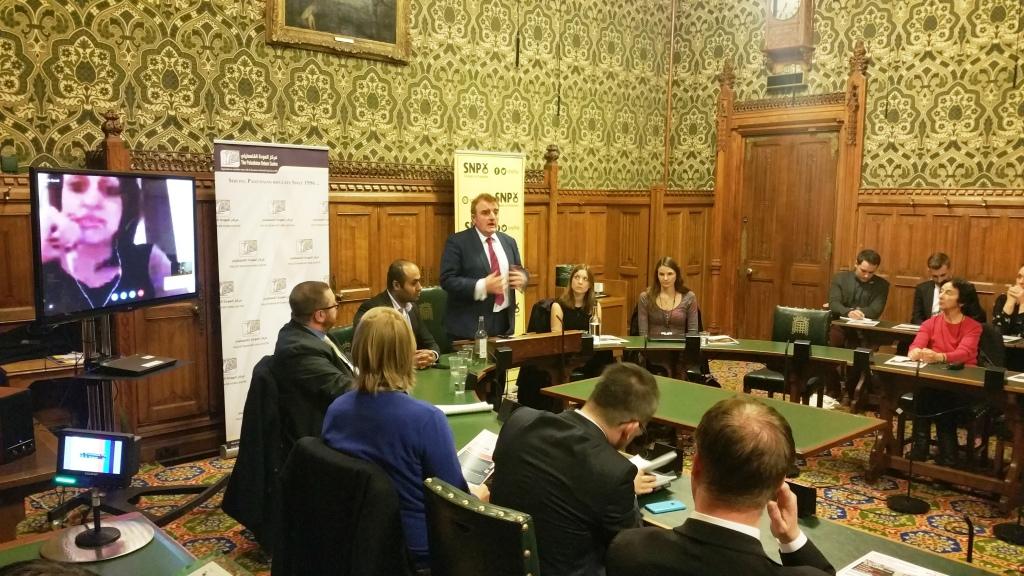 Palestinian Return Centre (PRC) and SNP Friends of Palestine held a seminar in the House of Commons hosted and chaired by Tommy Sheppard MP. The seminar focused on the issues faced by the Palestinian refugees of Syria, in light of the 5th year anniversary of the Syrian crisis. The discussion explored how Palestinian refugees remain particularly vulnerable and have been disproportionately affected by the conflict in Syria.


Tommy Sheppard, MP, introduced the event and presented the speakers.

Sameh Habeeb, Head of Media and PR at PRC, stressed the importance of the right of return for the refugees within the current humanitarian crisis.

Anne Irfan is a PhD Student examining UNRWA Camps and former Medical Aid for Palestinians. She discussed the vulnerabilities of the Palestinian refugees from Syria and the institutionalized discriminations that they face in other countries. They can’t ask for protection by the UNHCR, which deals with all refugees worldwide except Palestinian refugees, while UNRWA has limited services, which places Palestinians at a disadvantage.

Magda Qandil is a Consultant for Refugee and Humanitarian Affairs in the Middle East and Europe for UN agencies and major INGOs. Palestinian refugees from Syria are left with no solutions and are attempting the dangerous journeys to Europe through the Balkans in greater numbers. They often have to register as Syrians at borders, as Palestinians are not allowed to pass. She also discussed the situation in the Yarmouk camp.

Kathryn Ramsay is the Gender Researcher and Policy Advisor for Amnesty International (AI). She presented AI new report on refugee women from Syria in Lebanon, which included a number of Palestinians from Syria. The women face issues of daily violence and harassment, which is heightened by the lack of support and the restrictions of movement due to expired permits.

The session ended with a Q&A, which explored the issues in more depth. The audience also heard from a Palestinian refugee who fled the Yarmouk camp and told about his experience.