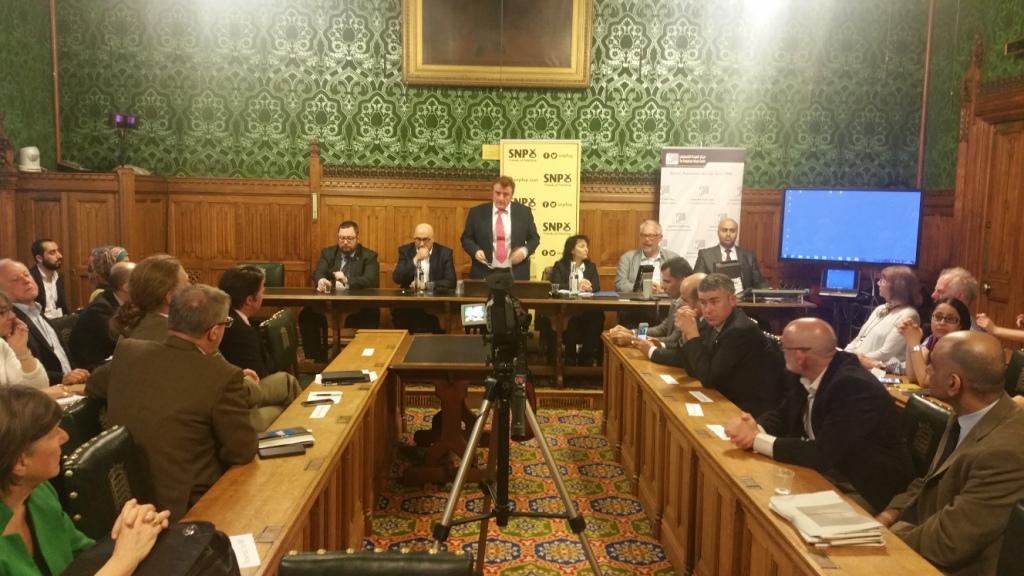 
The event featured a number of speakers such as H.E. Ambassador Hassassian, Professor Karma Nabulsi, Writer Jonathan Fryer and Sameh Habeeb addressed the audience to commemorate the 68th year of the ongoing Nakba and its significance today.  Over 15 MPs from across parties attended the event where some of them made valuable contribution.

The chair and host of the event, Tommy Sheppard SNP MP, moderated the evening and introduced the topic by explaining that in 1948 Israel caused the displacement of approximately 750,000 Palestinian who became refugees in neighboring Arab The Nakba represents the dispossession of hundreds of thousands of Palestinians and the expropriation of their homes and lands.

The first speaker, Palestinian Ambassador to the UK Manuel Hassassian, Palestinian Ambassador to the UK, reminded the audience that 7 million refugees are stateless. He then stated that “The two-state solution is now the two-state delusion” and “Israel scares others with a nuclear bomb but we scare Zionists with our ‘democracy bomb’”. He felt that the EU had been an “utter failure” disregarded by both Israel and Washington, and that the UN was the only hope for change.

Oxford University Professor Karma Nabulsi talked about way the history of the Nakba continues today with the plight of Palestinian refugees. She made the important point that British people are extremely unaware of their history, especially of the wrongdoings of their past colonial empire. Conversely, from an early age young Palestinians learn very well the role Britain played in establishing the state of Israel at the expense of the majority of Palestinians.

Jonathan Fryer, chair of Lib Dem Friends of Palestine, considered that the public’s emotional attachment to Israel has been diminishing. He denounced the term ‘settlers’ in preference for occupiers.

Sameh Habeeb, Head of Media and PR, he also led from 2011 to 2015 PRC’s successful bid to obtain United Nations ECOSOC special NGO consultative status. Habeeb concentrate his talk on the Zionist pressure on the prime minister David Cameron’s Cabinet. He also highlighted the complicity in Israeli war crimes against Palestinians by the British government. This is most evident by the continued interlocking of the UK weapons industry and the IDF.

Caroline Lucas, Green Party MP for Brighton, joined the panel to highlight how the Nakba continues today, listing the various crimes Israel is committing against Palestinians, namely checkpoints, settlements, the Gaza Blockade, administrative detentions, child prisoners etc.  She concluded by echoing Sameh Habeeb’s concern over British arms sales to Israel and that she has been very involved campaigning on this particular topic.

Andy Murray, Convener of the SNP friends of Palestine, commented that it is evident that the Nakba is still an ongoing process, not a static event of the past, as millions of Palestinian refugees remain displaced and dispossessed.