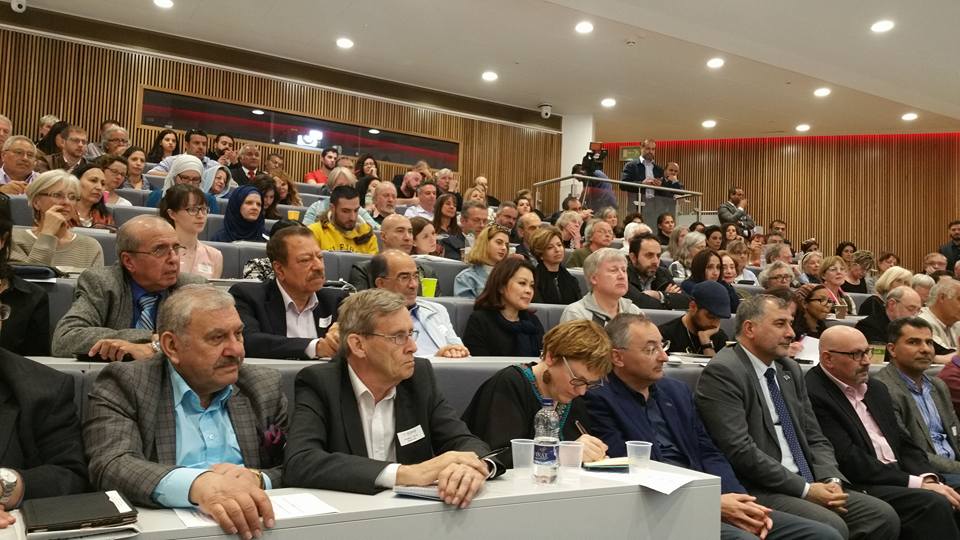 
The evening was moderated by the journalist and writer Victoria Brittain. First it was a shown a short clip produced by the PRC showing highlights from Abu Sitta’s life. The video talked about Abu Sitta’s life journey and his heroic status as an advocate for Palestinian’s right of return.

After the video, Abu Sitta addressed a packed out room.  Firstly he thanked everyone that helped in the completion of the book. He began his powerful speech by saying “They took away my home by force and made me a refugee. And I want it back”. This is the essence of Abu Sitta’s life described in his memoir. He also went on to discuss the ongoing character of the Nakba by saying that today it is much more documented and discussed than in the past.

The first review of Abu Sitta’s book came from Afif Safieh, former Palestinian ambassador to the UK. Afif Safieh lauded the book as full of “intellectual ammunition” which comes in a timely moment of history and is indeed very important for generations to come.

The second review of “Mapping My Return: A Palestinian Memoir” came from Selma Dabbagh, British Palestinian writer, lawyer and author.  Selma Dabbagh lauded Abu Sitta’s prose and attention to detail in his writing. For instance, she was very moved by Abu Sitta’s evocative descriptions of certain odors as well as other descriptions of Palestine before he was forced flee in 1948.

Ilan Pappe’, academic and historian, mostly known for his groundbreaking research culminated in the widely acclaimed book The Ethnic Cleansing of Palestine, paid tribute to the extraordinary life-long contribution of Salman Abu Sitta to educating the world on the realities Palestinian refugees face. Ilan Pappe’ utmost admiration for the book is in the powerful explanation of the conflict and the right of return as a simple issue. Pappe’ strongly agrees with Abu Sitta that in fact it is a very simple conflict to understand and the right of return is very practical to implement.  Those who wish to portray this as a complicated and impossible conflict to resolve are those who wish to deny the rectification of the crimes committed against Palestinians and do not want any change in the status quo.

The final review came from Palestinian Professor Dina Matar, Senior Lecturer in Arab Media and Political Communication, Centre for Media and Film Studies at SOAS. She told the audience of the importance of this book as a unique memoir from an exceptional academic. Dina Matar recognized in this book a great potential to reach a large section of the public because of its humanity. She even went on to say that the book deserved to be turned into a movie.

After the reviews short contributions were made by the organizers PRC and PSC. Majed Al-Zeer Director of the Palestinian Return Centre, passionately told the audience of the importance that Abu Sitta played in his life as invaluable role model. Abu Sitta’s has been an inspiration for the PRC since its inception 20 years ago, Al-Zeer continued.

Sara Apps, Interim Director of Palestine Solidarity Campaign, talked about the event coinciding with the commemoration of the Nakba and the great efforts PSC has put in organizing events across the country. She told of more than 60 events were held across various cities, an important achievement that shows the expansion of the movement in support of Palestinian rights.

A final word came from current Palestinian Ambassador to the UK, Manuel Hassassian. He said to be talking in his capacity has a professor and congratulated Abu Sitta on his outstanding work.

PRC and PSC provided a trophy of thanks and appreciation for Abu Sitta and his contribution in service of the Palestinian people and their narrative.