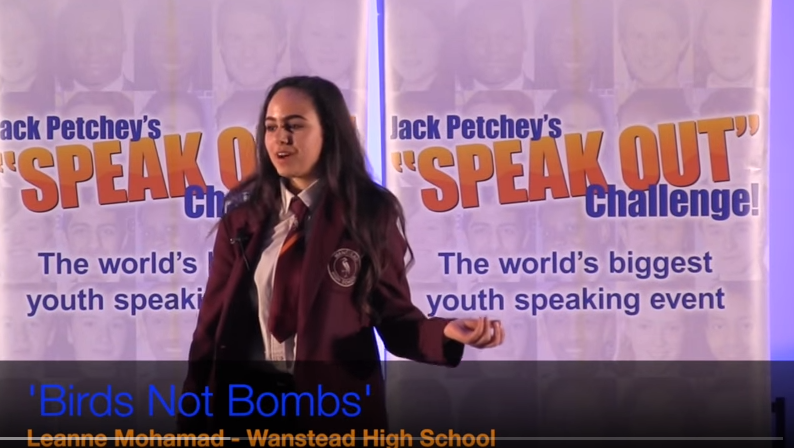 The Palestinian Return Centre (PRC) has been closely monitoring the story of Leanne Mohamadof Wanstead High School who won the Redbridge regional final earlier this month with a speech entitled  "Birds not Bombs". The centre has been in constant communication with theSpeakers Trustto investigate the details of story. Although Leanne has achieved a magnificent outcome by winning the regional final, she did not make it to the final stages of the contest. She did not make it to final stages not because of the content of her speech but because of technical reasons, has confirmed to us Speakers Trust CEO Julie Holness.


PRC has spoken with Leanne and her family where they expressed concern about their safety.

"Leanne has been receiving online threats and we are worried about her safety as well as the family. I will be escorting to the school on daily basis and the police is now officially involved" said the father

The video of Leanne's speech was widely circulated and applauded by those who support justice for Palestinians. The massive support that Leanne'svideoreceived upset some Zionist activists who distorted the issue, aiming to prevent that Israel’s image would be damaged. They decided to falsely claim that Leanne was voted out because of the her speech supposedly being “anti-Israel”.

Based on our communication with Speakers Trust CEO, Julie Holness, we can now confirm that Leanne was not banned from the contest and the video, which was temporarily suspended for the safety of Leanne, isnow online again. We can also confirm that all the information circulated by the blogger Edgar Davison are "propaganda" and inaccurate aiming not only to damage the Palestinian narrative and its support in the UK, but also it is an attack all organisations that support freedom of expression such as Speakers Trust.

We can also confirm that stance of Speakers Trust CEO, Julie Holness, who was apparently misled and unfairly attacked by political activists and blogger Edgar Davison.

The centre would like to share the response of Julie Holness on the campaign against the Trust which was sadly published by the Jewish chronicle.

Speakers Trust CEO, Julie Holness response to the Davison propaganda and the article published by the Jewish chronicle:

"All concerns communicated to us are taken very seriously but the private message sent by the CEO, and made public without her consent, was inaccurately represented.

Edgar Davison wrote under a different identity as an accomplished "Professor ......" and the intentions in writing back were twofold: to defend the accusation that the excellent Jack Petchey Foundation promotes propaganda by explaining some of the ground rules that are conveyed in training (these are not official competition rules that can be breached); and to let him know that Leanne had not been selected for the Grand Final so that any comments to her would immediately stop.

We facilitate training and assess videos as potential winning speeches; we do not make political judgments on the content. The comment of propaganda was not directed at Leanne's speech or at the topic, which has been covered freely before. The semi final judging was held on 21st May, seven days before the published email complaint was received and the online trolling began. Of the many criteria voted upon, the most important in this case was the length of the speech, which exceeded the maximum time of 3 minutes and incurred penalty points. Doubts about whether the speech would connect to such a large and diverse audience were secondary.

These are young and inexperienced speakers still learning the basic rules of public speaking and no participant ever has been disqualified. Speakers Trust believes in the right to free speech and Leanne Mohamad remains the Redbridge Regional Final Champion for 2016."

Therefore, the centre calls on the Jewish chronicle to remove the inaccurate article published on the basis of misleading information shared by Zionist blogger Edgar Davison. It is absolutely outrageous that a community newspaper such as the Jewish chronicle, take the lead in disseminating such false information without proper investigation.

Indeed the article of the Jewish chronicle may jeopardise the safety of Leanne and her family, thus an immediate apology for Leanne and removal of the article is indispensable.