Written Statement to HRC32 on Palestinian Refugees in Syria 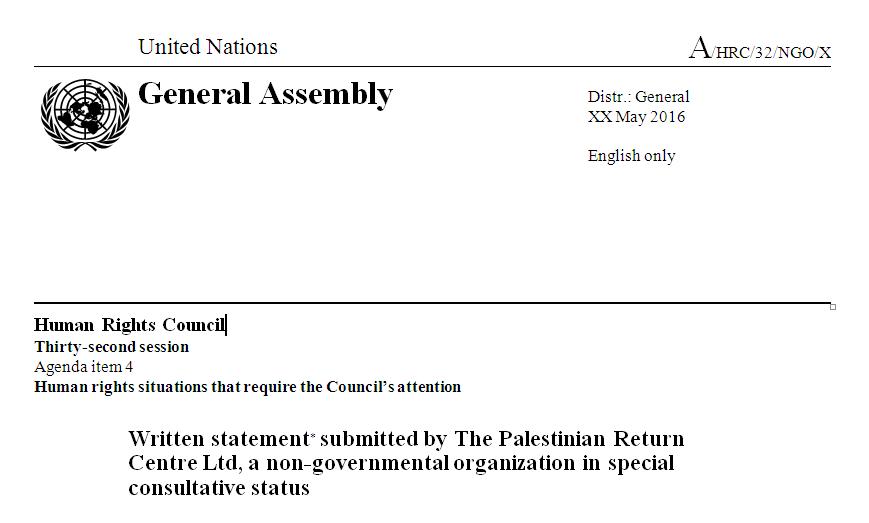 The Human Rights Status of Palestinian Refugees in Syria

Since 2011 Syria has been a war zone, Palestine refugees remain particularly vulnerable and have been disproportionately affected by the conflict, due to their proximity to conflict areas inside Syria. Palestinian refugees continue to suffer serious violations of international humanitarian and human rights law as a result of indiscriminate and widespread attacks on civilians and civilian infrastructure.

According to statistics from 2012, just before the beginning of the Syrian crisis that started to affect the Palestinian camps, UNRWA indicated the presence of approximately 540,000 Palestinian refugees in Syria.[1] Currently, UNRWA estimates the number of Palestinians refugees displaced from their homes inside Syria to be nearly 270,000, including approximately 8,100 refugees living in 18 shelter centers provided by UNRWA in Syria. In addition there are more than 3,500 refugees housed in 13 non-UNRWA facilities located in Damascus, Aleppo and Lathakia.

Palestinian families in Syria are suffering due to the extreme poverty that befell upon the country. The Syrian crisis has resulted in a breakdown of the country’s economy.  The collapse of the Syrian pound against the US dollar has resulted in a decline in the purchase value of the average worker’s salary. Prior to the Syrian crisis, the average worker’s salary was equivalent to about $300 with an exchange rate of 47 SYP. Currently the salary does not exceed $70, and the current exchange rate swings between 600-650 Syrian pounds compared to the US dollar.

The war has led to the destruction of the economic infrastructure of the Syrian people and the private sector has been damaged, leaving many Palestinian refugees unemployed. The report that was issued in March 2015 by the Syrian Center for Policy Research (SCPR), UNRWA, and the UNDP in Syria, titled "Alienation and Violence,”[3] indicated the following socio-economic indicators:

The unemployment rate has increased from 14.9% in 2011 to 57.7% at the end of 2014. 3.72  million people are unemployed, including  2.96 million people have lost their jobs during the crisis, which led to the loss of main source of income for 12.22 million people. Poverty rates have continued to increase during 2014; four from every five people are living below the national poverty line Almost two-thirds of the population (64.7%) surviving in extreme poverty as they struggle to meet the basic food or non-food needs. In light of poverty growth, 30% of population live in abject poverty and are unable to meet their basic food needs. Education is considered as completely collapsed, with a rate of 50.8% of children not enrolled in basic education during the academic year of (2014-2015) in various parts of the country compared to the total number of children in this age group. Half of all school children have not attended school for the past three years

As a direct result of what is mentioned above, a large percentage of Palestinian refugees in Syria have become fully dependent on subsidies provided by UNRWA and other relief organizations.

From the beginning of the Syrian crisis in March 2011 to the 25 of May 2016, the Action Group for Palestinians of Syria (AGPS) has documented that 3,234 Palestinian had died due to war related activities inside Syria and outside of Syria while trying to reach Europe.[4] The AGPS also documented that thousands of Palestinians had been detained, including almost 1076 prisoners unaccounted for.

The Syrian Regime forces and the affiliated groups are still imposing a suffocating siege on the Yarmouk refugee camp since mid-July 2013. The population is under and almost complete loss of basic life needs. The siege resulted in the deaths of 187 Palestinian due to starvation and lack of medical care.[5] People in the camp live in complete darkness as a result of power outages since April 2013 until now. Moreover, the drinking water has been cut since September 2014.

ISIS members carried out many cases of assassination against civilians since they took control of the camp in April 2015.

Since the beginning of 2013, Syrian regime forces in the regiment 137 continue to besiege and close Khan Sheikh Camp in Damascus, where the forces have closed all roads leading to it except for one road that is directly exposed to snipers and shelling on a daily basis. The shelling targets staff and students who go through this road each day; the last massacre resulted in the deaths of five civilians, in May 2016, when their bus was targeted. The regime forces also prevent the entry of flour, fuel, and medicine into the camp.

Although the camp is clear of militants, residents of Sbeina camp are suffering from forced displacement and since November 2013 is also under full control of the Syrian Regime Forces.

On the other hand, residents of the Handarat camp are scattered in different areas of the suburbs of Aleppo city and Lathakeia after Syrian opposition groups imposed their control over the camp for more than 1,120 days, as they expelled all residents since then.

Meanwhile, residents of Deraa camp have been suffering from water cuts for almost 782 days, in addition to the destruction of about 70% of its buildings, as well as the displacement of most residents towards villages and towns of Deraa governorate. [6]

The AGPS monitoring team has documented at least 1,076 Palestinian refugees detained in Syrian prisons; they were mostly arrested at the camps' exits and checkpoints scattered inside the cities. The detainees were detained for long periods without trial and in unknown locations, in addition to at least 339 missing and kidnapped people.

The AGPS also documented 441 cases of deaths due to torture in the regime's prison, while hundreds of Palestinian refugees in Syria were temporarily arrested.

According to various field sources, the Regime forces and the Syrian armed opposition groups, scattered along the land road between Damascus and the border of Turkey, facilitated the exit of thousands of Syrians and Palestinians towards Turkey in exchange for a sum of money ranging between 1,000-1,500 US$, via specialized gangs for smuggling humans often based on extorting refugees.

Violence against Women and Girls:

The Palestinian women in Syria have been exposed to detention, kidnap, murder, and disability due to the ongoing acts of violence. As of May 2016, the AGPS documented 445 Palestinian female victims, which represents 41% of the total Palestinian documented victims.

However, reality is that the numbers of women who have been violated is much greater, for the fact that families are reticent as a result of the prevailing customs and traditions in some segments of Palestinian society, such as the fear of bad reputation or the "scandal."

The AGPS provides here a summary of statistical work, which is the result of particular efforts implemented by a group of Palestinian activists during the previous years of monitoring and documenting victims, detainees, and missing people of Palestinian refugees who were killed because of the war in Syria.

According to the AGPS statistics[7], about 3,235 Palestinian victims died in Syria as a result of the following reasons:

Considering the UN Human Rights Council’s concern to improve the human rights situation in Syria, to protect civilians against violations, and to improve their situation, we present these demands and suggestions:

1-      Put pressure over the Syrian Regime in order to stop targeting the camps and killing Palestinians in Syria, to release the detainees, and to guarantee the respect of their legal status as permanent refugees in the Syrian territories. 2-      Provide the required protection for Palestinians in Syria through the UN institutions, and to activate the provision of their protection through the UNHCR or UNRWA. 3-      Include the Palestinian refugees who are outside the scope of UNRWA's services, such as Turkey.  4-      Put pressure on the governments of Syria's neighboring countries to improve the ways of dealing with Palestinian refugees residing in their territory, particularly in Lebanon, Jordan, and Turkey, to provide them with accommodation and visas, and to ensure freedom of movement and border crossing. 5-      Stop the reducing of services policy adopted by the UNRWA and to increase funding allocated for Palestinian refugees inside and outside Syria.

*    This written statement is issued, unedited, in the language(s) received from the submitting non-governmental organization(s). 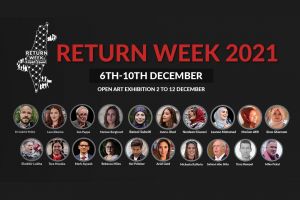 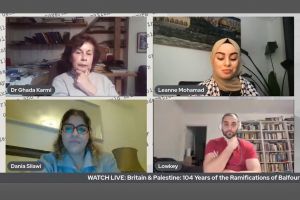