Written Statement to HRC32 on Palestinian Refugees in Lebanon 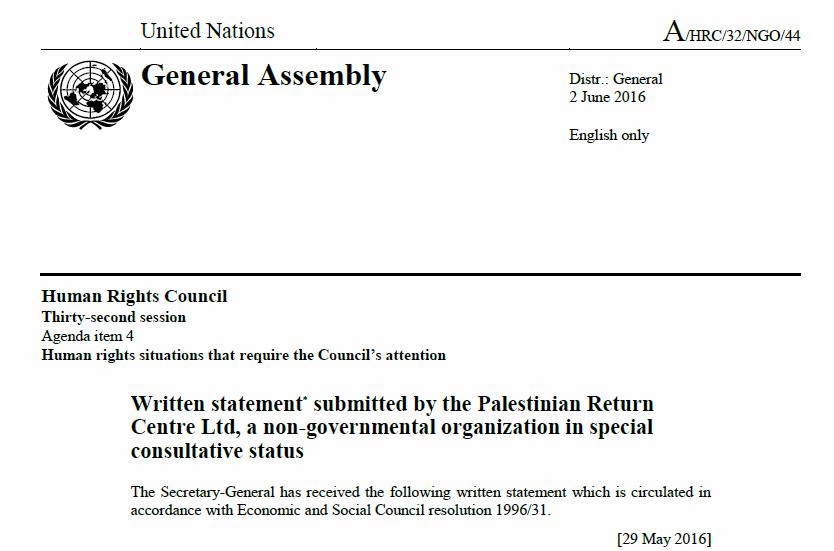 The Ongoing Human Rights Violations of Palestinian Refugees in Lebanon

Out of roughly 800.00 to 935.000 Palestinians displaced because of 1948 Arab-Israeli War, about 80,000 became refugees in Lebanon. As of January 2015, the number of refugees registered with UNRWA in Lebanon is 493,134 and many of them live in the 12 recognized Palestine refugee camps.[1] However, the actual number of refugees living the country is much less. About 260,000-280,000 refugees were living in Lebanon prior to the conflict in Syria.[2] More than half of the refugee population lives in 12 refugee camps (62%) as compared to 38% living in 42 informal gatherings, mainly in camp vicinity; others live in towns and cities across the country.[3]


Despite their longstanding presence in Lebanon Palestine refugees do not benefit from key aspects of social, political and economic life. This causes Lebanon to have the highest percentage of Palestinian refugees living in extreme poverty.[4] The pre Syrian crisis refugee population has historically suffered from limited rights and limited access to public services and employment. Lebanon is not a signatory of the 1951 U.N. Refugee Convention and its 1967 protocol does not recognize the basic rights and legal obligations to people with refugee status.

Palestinians face important legal restrictions that limit their rights, and have limited right to use state-provided services such as health and education. Stateless Palestinians who came from outside Lebanon do not enjoy the rights given to foreigners holding citizenship from another country. Checkpoints restricting access to most of the camps thwart trade and commerce with neighbouring communities. These legal issues cause the majority of the camps’ population completely dependent on UNRWA and other non-profits - local and international - for everything from schools to humanitarian assistance. Within camps UNRWA provides housing, water, and electricity. UNRWA also provides education, health care services as well as some additional welfare services to Palestinians living in camps. Although a total of 46 Arab organizations and 20 foreign NGOs assist Palestinian refugees in Lebanon, the volume and scope of their assistance pales in comparison to services delivered by UNRWA. In essence, the government does not provide a social safety net for Palestinians living in Lebanon.

Legal restrictions imposed by the government cause Lebanon to have the highest percentage of Palestinian refugees in the Diaspora living in poverty.[5] 160,000[6] Palestinians are considered poor or extremely poor, that is two-thirds of the total refugees in Lebanon. Similarly, two-thirds of Palestinian refugees from Lebanon (PRL) are considered to be food insecure. Poverty and food insecurity are significantly correlated and most poor and extreme poor experience some degree of food insecurity. A third of PRL is estimated to have a chronic illness and 4% a functional disability. In terms of education, it has to be emphasized the rising percentage of early school dropout. This severely affects refugee’s chances of employment, which are already reduced due to legal restrictions, which consequently increases levels of poverty. Poor quality housing continues to be a problem in communities where most Palestinian refugees live in Lebanon. A staggering 40% of households have water leaking through their roof as well as other issues.[7]

The crisis in Syria and the resulting influx of refugees to Lebanon has made the country the largest per capita recipient of refugees in the world.[8] The conflict in Syria has significantly contributed to the plight of Palestinian refugees. The escalating violence makes movement and access more difficult and causes severe adversity. Lebanon effectively closed its borders to Palestinian refugees from Syria (PRS) in May 2014. 42,284 PRS are recorded to reside in Lebanon in August 2015, the number has decreased from the recorded 53,070 in April 2014 namely due to emigration from Lebanon to Europe and other countries.

It is estimated almost 33,000 Palestinian refugees from Syria (PRS) are now living in Lebanon. The arrival of PRS to Lebanon has not spared its existing Palestine refugee gatherings and camps, which suffer from overcrowding and dire living conditions: the majority of PRS – 54.8% – are settled in the 12 camps throughout Lebanon, whereas the remaining 45.2% live in gatherings located in fringe areas around the camps and across the country.

PRS suffer from the same legal restrictions of PRL as well as specific restrictions that apply only to them. For instance the Lebanese government has placed new requirements that in essence deny PRS the ability to renew their temporary residency visas, leaving them without a clear legal status in the country and risk of arrest and deportation. PRS’s economic status is extremely critical, as almost 90% of families lack an income. [9] Food security is also a major issue; two thirds of families are not able to provide three meals a day. Almost 50% of PRS families have at least one member suffering from a chronic condition.[10] As of 2015, 74% of families have at least one child who is not attending school, and many children have witnessed horrible violence in Syria. The two main concerns with housing is that PRS live in extremely overcrowded environments as well as having to pay high rents, which most families cannot afford.

The Palestinian Return Centre calls on Mr. President and the Distinguished Members of the Council to:

Put pressure on the Lebanese government to respect the articles in the Universal Declaration of Human Rights and comply with international law rules and norms. Support the Lebanese government, which is already coping with a refugee crisis, must be backed and helped by the international community.Advocate for the Palestine Refugees right to decent work, to ensure that Palestine refugees rights are improved and applied, and that an improved understanding of existing rights amongst both refugees and employers is on place. To help UNRWA in its support for Palestinian refugees (especially providing better food security, housing conditions, education and health assistance) until an appropriate solution is implemented. Demand that the Lebanese authorities drop the discriminatory requirements imposed on PRS which are increasing the vulnerability of refugees and contravene international law. In line with the UN SDGs the international community should act to eradicate poverty from Palestinian refugees in Lebanon. Pressure Israel to recognize its responsibility for the Palestinian refugees’ displacement for the past 68 years and accept their full repatriation to their place of origin which is guaranteed by International law and the related UN resolutions. This should include granting them financial and moral compensation for their loss.