Written Statement to HRC32 on the Gaza Strip 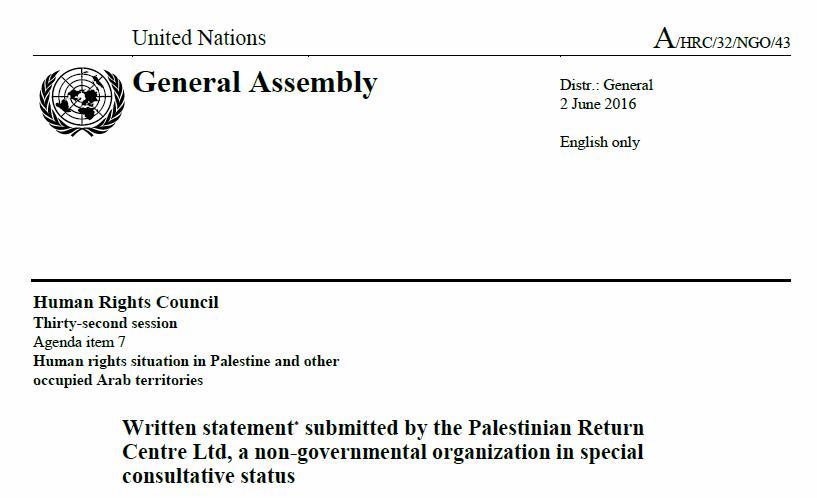 The Palestinian Return Centre (PRC) is concerned about the failure of international community to exert real pressure on the State of Israel, the Occupying power, to bring its actions in line with its obligations under international humanitarian law and UN resolutions.


There should be concern in particular about the disastrous humanitarian situation and the critical socioeconomic and security situations in the Gaza Strip, including that resulting from the prolonged continuous closures and severe economic and movement restrictions that in effect amount to a blockade. The blockade of Gaza by the State of Israel fully implemented since 2007 and has been described by the United Nations Secretary-General as “a continuing collective penalty against the population in Gaza”. In 2016, an estimated 1.3 million people are in need of humanitarian assistance in the Gaza Strip. At the same time, impunity for Israeli attacks on Palestinian civilians and the current status quo is rendering the prospect of another major war increasingly likely. The international community must intervene immediately to protect civilians and lift the blockade, which has been imposed on Gaza for nearly a decade.

Acute deterioration of the humanitarian situation in the Occupied Gaza Strip

The blockade has created an acute deterioration of the human rights situation on the ground, with a negative impact upon all sectors of life. The blockade has also contributed to the fragmentation of the Occupied Palestinian Territories because of the restrictions imposed on Palestinians to travel between Gaza and the West Bank, with both economic and social repercussions.

80% of the population currently receives international aid[1], while 73% suffer from food insecurity and 95% of the water from the Gaza aquifer is unsafe for human consumption and may become unusable by the end 2016.[2]

Although applications for permits to leave Gaza have increased, approval rates have declined significantly in 2015. This includes medical referrals out of Gaza, usually to health clinics in the OPT, Israel, Jordan or Egypt.In February 2016, over 30,000 people with urgent needs were waiting to cross Rafah.[3] Children made up one fourth of the applications for referrals that were delayed or denied by Israeli authorities.

Israel’s bombing of Gaza’s only power plant in 2006 has created a “chronic electricity crisis”, with power cuts between 12 and 20 hours per day. This has forced Palestinians to buy electricity from Israel and Egypt, which, however, provide only 45% of the estimated 470 MW electricity demand.[4] The damage caused by Israel’s attacks and the lacks of alternative fuels due to the blockade are major factors contributing to the energy crisis. As noted recently by the United Nations Special Coordinator for the Middle East Peace Process Nikolay Mladenov “Three Palestinian children had died when their house had caught fire from a candle lit during a power cut”[5].

The continuing and vastly negative repercussions of the military operations between December 2008 and January 2009, in November 2012 and in July and August 2014 have resulted in an unprecedented scale of death and destruction. As the weight of cumulative bombardments grows heavier, the solvent of Israeli siege accelerates the Gaza Strip’s infrastructure’s disintegration.

In 2014, the Gaza Strip witnessed the deadliest escalation in hostilities since the beginning of the Israeli occupation in 1967. Evidence collected by the “Report of the independent commission of inquiry established pursuant to Human Rights Council resolution S-21/1” suggest that a wide range of crimes have been committed by Israel inside the OPT during the summer 2014 hostilities. Some 2,251 Palestinians including 1,462 civilians were killed of whom 299 women and 551 children; and 11,231 Palestinians, including 3,540 women and 3,436 children, of whom 10 per cent suffered permanent disability as a result.[6] More than 1,500 children were orphaned, an estimated 27,000 children had their homes completely destroyed and 44,000 children remain displaced as of April 2016.

Almost 500,000 people were internally displaced (IDP) at the height of the 2014 hostilities in UNRWA schools, government schools and informal shelters, and with host families. IDPs are living in a variety of shelter conditions, with almost a quarter living on the rubble of their damaged homes. Some 11,000 housing units were totally destroyed and 6,800 housing units were severely damaged from the 2014 hostilities; combined, almost 18,000 homes were rendered uninhabitable.[7] By the end of March 2016, about 17 per cent (3,000) of the approximately 18,000 homes destroyed or severely damaged had been reconstructed or repaired following cash assistance from UN agencies or other international support.[8] It is estimated that 75,000 people remain displaced.

It is evident that temporary measures that do not challenge the root causes of the conflict are bound to be ineffective. In this regard rather than challenge Israel’s siege and systematic attacks the Gaza Reconstruction Mechanism (GRM) is entrenching the closure. The GRM should not be considered a substitute for a full and immediate lifting of the blockade.

Illegal Israeli attacks of Palestinian civilians continue throughout 2016. Based on data[9] published by the UN’s Office for the Coordination of Humanitarian Affairs (UN OCHA), there have been more than 100 incidents of Israeli forces opening fire at Palestinian civilians and property on land and at sea, since the start of the year. The Palestinian Centre for Human Rights (PCHR) in Gaza has documented 71 incidents of Israeli attacks on land and at sea during January and February[10], including 45 shootings, and seven military incursions.

On March 12 2016 six-year-old Israa Abu Khussa and her 10-year-old brother Yassin were still sleeping when the Israel Air Force launched four airstrikes across the Gaza Strip in the early hours of the day. Missile fragments tore through their home, only partly rebuilt following the 2014 offensive. Yassin and Israa were rushed to hospital, but both died of their wounds. Two other children were injured.

With the exception of the extremely slow reconstruction process of what was destroyed during the last Israel-Gaza war in the summer of 2014, the conditions that preceded that war remain in place. Without improvement on any of the issues Gaza is facing, the risks for a new round of fighting remain high. Given that it is one of the most densely populated areas in the world, and considering the past three recent attacks, a high number of civilian deaths would be extremely likely. The continued escalations show the fragility of the informal truce in place since 2014. The international community must intervene promptly to prevent a disaster, before it happens.

Considering the UN Human Rights Council’s concern over the matter of Israel’s occupation of the OPT, and the urgency to bring to the attention of the Security Council and General Assembly any matter which may threaten the maintenance of international peace and security, the Palestinian Return Centre calls on Mr. President and the Distinguished Members of the Council to:

Take strong measures to bring to an end Israeli impunity and bring Israel to immediately lift the blockade of the Gaza Strip and cease collective punishment of Palestinians in the OPT, including East Jerusalem. Exert pressure on Israel to bring to an end its illegal attacks on Palestinian civilians, preventing Palestinians from accessing their lands and fishing areas which violates numerous provisions of international human rights law, including the right to work, the right to an adequate standard of living, and the right to the highest attainable standard of health.  Call on Israel to comply with International Humanitarian Law rules and norms including the investigation of and accountability for all violations in accordance with international standards. Accountability must be pursued for all violations of human rights and humanitarian law, including attacks on medical personnel and infrastructure. Exert pressure on Israel to halt its arbitrary denial of humanitarian assistance entering the Gaza Strip. Work towards ending the Israeli occupation and have a long-lasting solution whereby Palestinians enjoy their full human rights including the right to self-determination.
Download the statement here