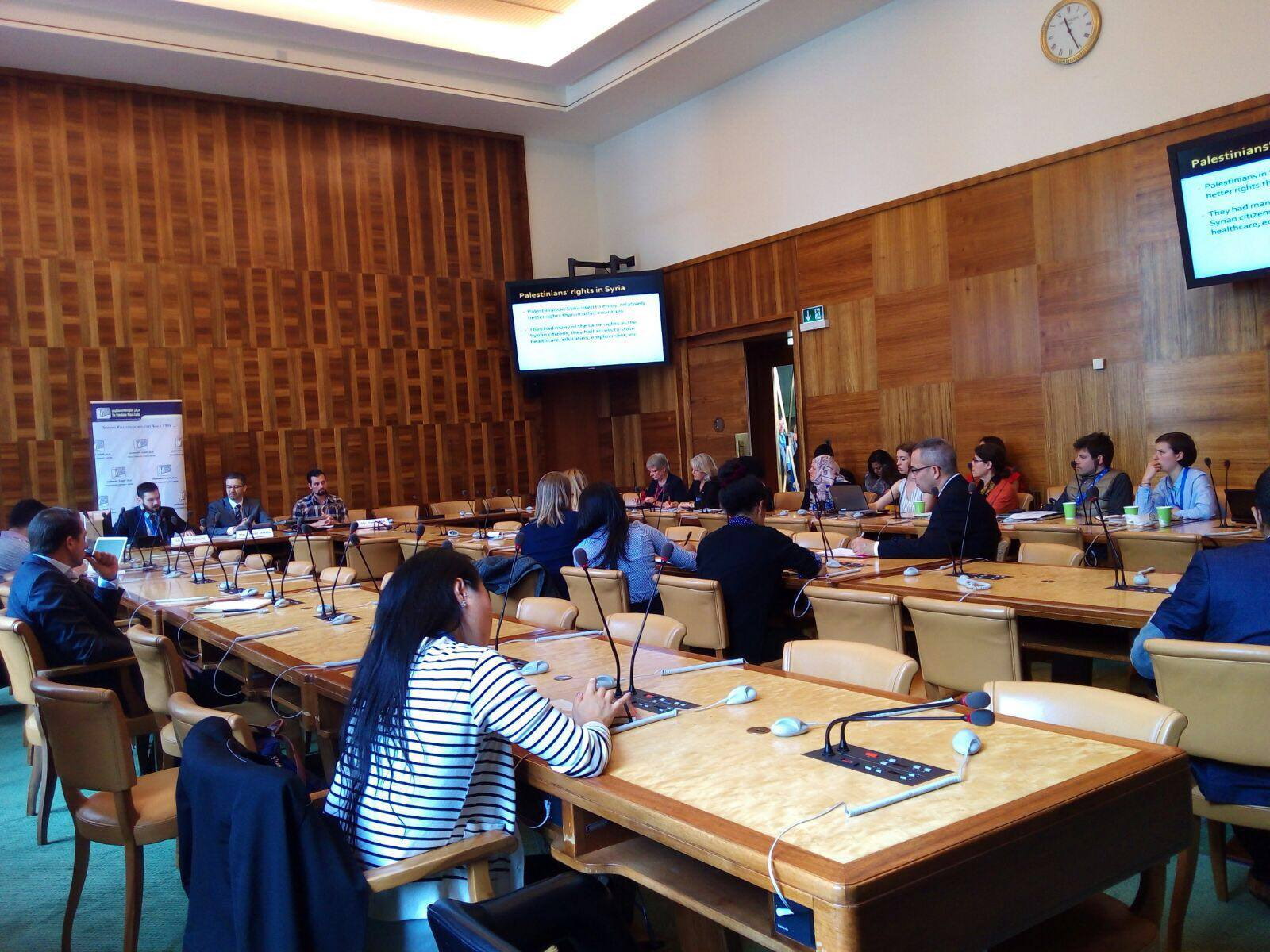 On June 16 the Palestinian Return Centre hosted a side event at the 32nd Human Rights Council in Geneva on the unique vulnerability of Palestinian Refugees from Syria.

The event focused on the anomaly that is the Palestinian Refugee status and how it affects Palestinians fleeing the Syrian civil war. At the same time it was discussed the human rights violations on those Palestinian still trapped in Syria.

The first speaker, Nawras Ali, Palestinian activist form Syria living in the Netherlands, talked about his experience in Syria throughout the Syrian uprising and on the immigration route to Europe. He began his speech by saying that his grandfather had to escape Palestine in 1948 to Syria because of the Zionist attacks on his village and other villages and cities of Palestine.

Nawras Ali describes his trip to escape Syria: “You can imagine my death journey at sea for 10 days in a small fishing boat with 250 other people including children, women, pregnant women, and even a paralyzed man. And without pure luck or as we say it "the will of God" we wouldn't made it to the shore, and after that smuggling journey until we reached Amsterdam and then I became a refugee for the second time.“

The next speaker was Pietro Stefanini, Researcher and Advocacy Coordinator at the PRC.  He talked about how statelessness affects Palestinian refugees from Syria. Stefanini talked about its been 5 years since the beginning of the Syrian crisis, and that we know too well there are millions of how Syrian refugees fleeing the country, and millions displaced inside Syria

Stefanini stated that what we’ve heard quite a lot less is the plight of the Palestinians who are also fleeing Syria in very large numbers and who are becoming twice displaced, sometimes even three times displaced.

These Palestinian refugees from Syria are suffering from further persecution simply because they are Palestinian. At the core of their plight obviously is the fact that Palestinians are stateless. They have no other home than Syria but do not have Syrian citizenship and have therefore been denied even the basic rights secured for other refugees.

According to Stefanini this makes them inherently vulnerable for the obvious reason that they lack the protection of a state. But in the case of Palestinian refugees from Syria, they’re additionally vulnerable because they are also lacking protection from all kinds of other international organizations and bodies that are responding to the Syrian crisis by focusing only on Syrian refugees rather than all refugees from Syria.

Lastly Ahmad Hosain @Ahmadhosain1, CEO of Action Group for Palestinians of Syria (AGPS), discussed the work his organisation does on monitoring human rights violations on Palestinian refugees form Syria. Hosain talked about the conditions of Palestinian refugees before the uprising in 2011 and he described their situation as being relatively good. They did not have citizenship but were afforded most benefits afforded to Syrians. Since 2011 the AGPS has reported 3254 victims, of which 445 died of torture, 1078 as shelling and 293 as sniper shots. In regards to the targeting civilian facilities and civilian houses, 70% of the Deraa Camp and 80% of Sabina camp has been destructed.