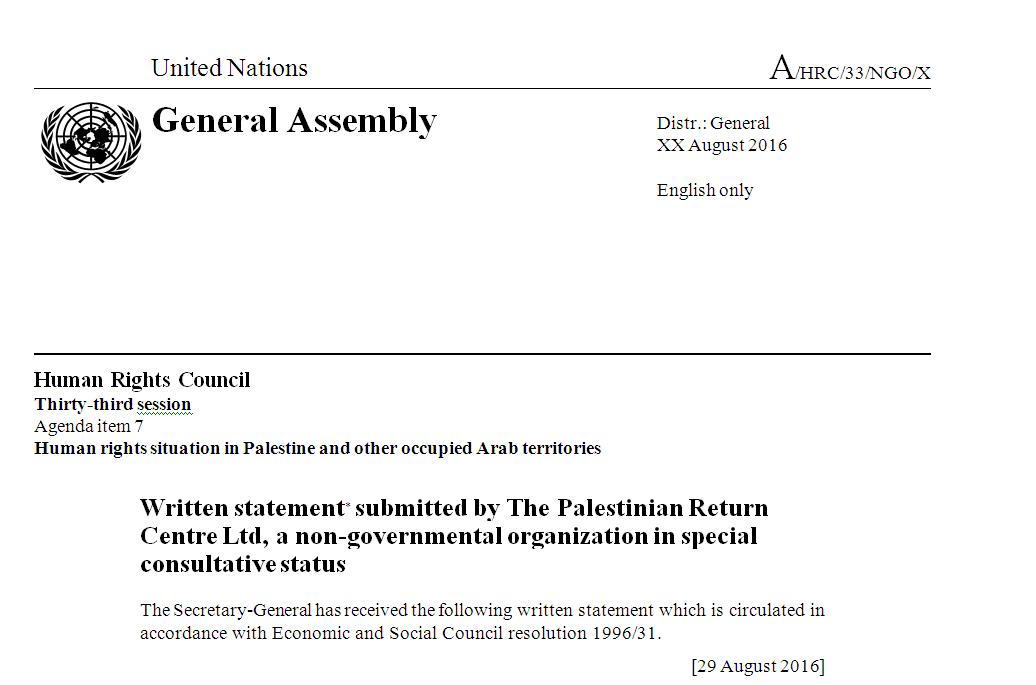 The Palestinian Return Centre (PRC) is concerned about the failure of the international community to exert real pressure on the State of Israel, the Occupying power, to bring its actions in line with its obligations under international law and UN resolutions.

Israel’s entire settlement enterprise in the OPT is illegal under international law, as reaffirmed by the International Court of Justice in its Advisory Opinion[1] on Israel’s Separation Wall in 2004. As reiterated by the International Fact-Finding Mission on Israeli Settlements in the Occupied Palestinian Territory: “All Israel’s settlements in the Occupied Palestinian Territory, including East Jerusalem, are illegal under international law. The Fourth Geneva Convention prohibits an Occupying Power from transferring its civilian population into an occupied territory”.[2]

The existence of settlements leads to violations of many of the human rights of Palestinians, including the rights to property, equality, an adequate standard of living and freedom of movement. In addition, the radical changes Israel has made to the map of the West Bank preclude any real possibility of establishing an independent, viable Palestinian state as part of the fulfillment of the right to self-determination.

The illegal Israeli settlements in the OPT continue to deny the right of return of Palestinian refugees displaced in 1967, as noted in UN General Assembly Resolution 237 which “Calls upon the Government of Israel to… facilitate the return of those inhabitants who have fled the areas since the outbreak of hostilities.”[3] In fact, during the 1967 war, some 200,000 Palestinian residents of the West Bank and Gaza Strip were stranded outside the country and blocked from returning. Almost immediately upon seizing the territories, the Israeli army issued Military Order 58[4], which authorizes the seizure of any property held by West Bank residents who were outside the area on 7 June 1967 or who subsequently left.