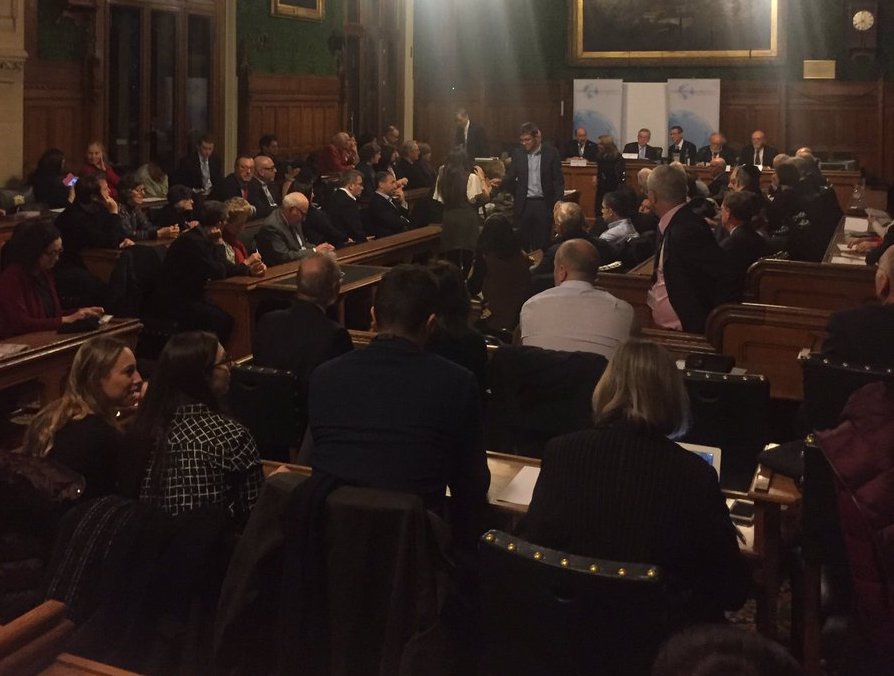 On Tuesday November 29th Michael Gove MP hosted an event in the House of Commons which was organized by the Henry Jackson Society, a known pro-Zionist, neoconservative and deeply influenced by Islamophobia think-thank[1]. The event was a frantic effort to salvage and defend the Balfour Declaration after the emergence of Palestinians’ efforts to seek an apology and accountability for Britain’s past colonial crimes.

This event was staged as a direct response to the Palestinian Return Centre’s meeting held in October in the House of Lords. As PRC’s launch of the Balfour Apology Campaign made headlines in the UK and around the world, pro-Israel supporters scrambled to organize an event in the House of Commons to defend the Balfour Declaration. The panel included Israel’s ambassador to the UK and other figures close to Netanyahu’s government.

We attended the event and were shocked by the many comments which can certainly be characterized as anti-Palestinian hate speech.

One of the speakers was Dore Gold, the head of the Jerusalem Center for Public Affairs and up until a month ago the Foreign Ministry’s director-general, highlighted what he said were the links between the Palestinian Return Centre, which had asked for the apology, and Hamas. The PRC, he said, had been outlawed in Israel in 2010 by then Defence Minister Ehud Barak, because of these links.

“They appeared in the House of Lords seeking to delegitimise Israel, but the shoe should be on the other foot”, he said, and denounced the PRC for “seeking an apology from the British government for past colonial crimes.” Israel, he said, was not a colonialist entity: “It was restored as a Jewish commonwealth after it had been destroyed.” It was “an audacity” of the PRC “to come to the greatest parliamentary democracy in the world and challenge Israel’s existence.”[2]

As per usual, Israel’s hasbara advocates decided to use the ‘terrorists’ card in order to delegitimize PRC’s campaign, which is gaining support in the UK. Dore Gold is referring to the Israeli government’s decision to ban the PRC in 2010 due to alleged connections to Hamas, which according to a study by the British independent research centre Public Interest Investigations, the ban was based on unfounded allegations and circumstantial evidence.[3]

Even after the PRC was accredited as an NGO with special consultative status to the United Nations ECOSOC in 2015, pro-Israel propagandists continue to smear the PRC as a “terrorist entity” or “Hamas’ operative in Europe”.

The fact that the PRC has been active in the UK since 1996 and continues to legally work within the UK and EU parliament and regularly attends UN meetings in Geneva and New York, makes Israel and its advocates’ ridiculous claim hard to believe. Furthermore, if Israel had any evidence of PRC being part of Hamas, why doesn’t it ask her supposedly great ally and friend Britain to close down this “terrorist” NGO?

Of course, it’s not enough to try to discredit the NGO behind the Balfour Apology Campaign, and so this event was purposively scheduled in the UK parliament with the aim to influence public opinion, which they fear might be moving waking up to the unpleasant reality of Britain’s colonial legacy in Palestine.

According to an article of the Jerusalem Post “A group [PRC] met in Britain’s House of Lords with the aim of burying the Balfour Declaration, an Israeli group on Tuesday will take to a room in the House of Commons to praise it.”[4]

However, the task of praising the infamous Balfour Declaration is becoming increasingly difficult. Only last week, during a Westminster Hall debate, Conservative MP Bob Stewart stated that “Britain was being either duplicitous or incompetent with the Balfour Declaration”.

During the same debate Foreign Office Minister Tobias Elwood MP, backtracked from previous statements and announced that the government will not be celebrating the centenary of the Balfour Declaration. As the conflict continues to affects millions with no end in sight, the desire to “celebrate” or “praise” the Balfour Declaration is a contradiction too great even for a great supporter of Israel such as the Conservative Party.

The narrative of pro-Israel advocates was abundant of contradictions as evidenced in their “Refuting Balfour’s Detractors” event. During the discussion Balfour was described as a great intellectual and philosopher. Praise was conferred even to President-elect Trump, as one of the panelists, Yair Hirschfeld, echoed other Israeli politicians in his claim that election of Trump is a “good opportunity” for Israel to implement her “vision”. While discussing the two-state solution, which he is a self-proclaimed a strong supporter, he suggested that the illegal settlements established in the occupied territories should be part of Israel in a two-state solution. His statement is evidence of Israel’s goal ever since the Oslo Accords – lip service to the international community about a two-state solution while in reality acquiring as much Palestinian land with as little Palestinians in it as possible.

Another speaker was Andrew Roberts, visiting professor at the Department of War Studies, King’s College London. Mr. Roberts’s made great efforts to pay tribute to the Balfour Declaration, though his argument was rife with incongruity. He claims that the declaration was a “miraculous event” and one of the “most egregious moments of the British Empire” while at the same time suggesting that Britain should be “proud of it but it has nothing to do with colonialism”. Is Mr.Roberts implying that the British Empire had nothing to do with colonialism?

Similar denial emerged from some of the audience’s questions. One unidentified individual questioned whether Palestinians were a real people and actually existed. The phrase "there is no such thing as Palestinians" is one of the core Zionist’s myths propagated by Israeli leaders such as Golda Meir.

Mr. Roberts, in response to a question on whether the Balfour Declaration gave Zionists legitimacy to the land in Palestine, affirmed that Balfour did give away any land and that they had to “work and buy every piece of land in Palestine”. Here Mr. Roberts whitewashes the ethnic cleansing that Israel committed in order to establish its state which had to expel the majority of the indigenous population and destroy hundreds of their villages.

Another audience member seemed worried about the Israel’s public perception as he asked: “Don’t you think in a generation time Israel will lose Western democracies supporters?” To this Mr. Roberts sarcastically replied “What support?” and continued “Countries are failing to stand up for Israel”.

Finally, the closing remarks came from Michael Gove MP, which affirmed what the pro-Israel lobby has been increasingly pushing for, which is saying that “anti-Zionism is the same as anti-Semitism”. Mr. Gove ended the evening with a shocking claim, probably taking note from Trumps recent statements, which is that on the centenary of the Balfour Declaration Britain will move its embassy from Tel-Aviv to Jerusalem. This would be in violation of international law since the international community has not recognized Jerusalem to be the capital of Israel.

To conclude, Dore Gold exemplifies Israel’s fear to truthfully deal with the Balfour Declaration as he states: “They want to put the state of Israel into the colonialist box, seeing Israel as a colonialist entity born of British imperialism.”[5] He is right - that is our intention because that it is the truth and it is increasingly the perception of the British public which will be ever more difficult for Israel to challenge as we approach the centenary of the Balfour Declaration.

Lastly, the PRC is looking at filing a formal complaint to the House of Commons for this event which was characterized by many extremist comments that amount to anti-Palestinian hate speech.

The Research Dept. at The Palestinian Return Centre