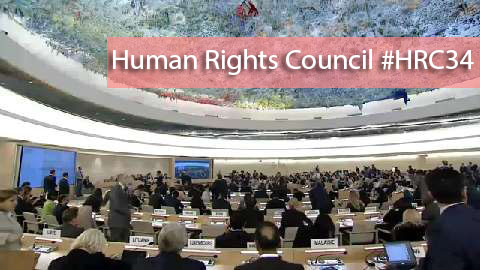 The London-based Palestinian Return Centre (PRC) took part in the opening ceremony of the 34th Regular Session of the United Nations Human Rights Council (UNHRC), held at the Palais des Nations, in Geneva.

Speaking at the General Debate on Agenda Item 3 to discuss violence against children, PRC delivered an oral statement on the Israeli infringements of Palestinian children’s rights.

A series of PRC events and statements, written and oral, is slated to take place in line with UNHRC’s 34th Session as part of PRC’s ongoing endeavors to raise the issue of the Palestinians of Syria, Lebanon, Jordan and the human rights situation in the occupied Palestinian territories.

A seminar is also expected to be held by PRC on March 17, 2017 so as to speak up for the cause of justice and accountability in the occupied Palestinian territories.