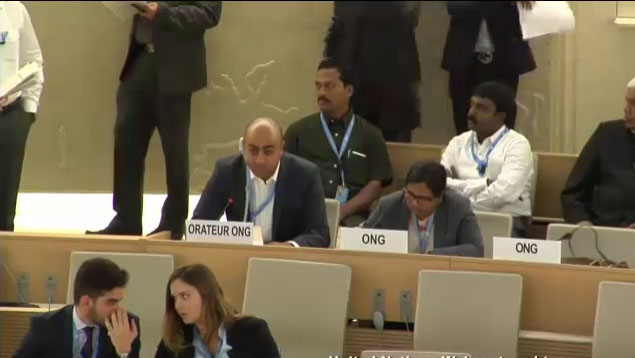 As part of its active engagement in the interactive discussions held at the 34th Regular Session of the United Nations Human Rights Council (UNHRC), the Palestinian Return Centre (PRC) spoke up against the racist practices perpetrated by the Israeli occupation against the Palestinians.

Speaking during a debate staged under Agenda Item 9, PRC delegate Sameh Habeeb referred to the findings of a recent report issued by the United Nations Economic and Social Commission for Western Asia (ESCWA) accusing Israel of imposing an apartheid regime on the Palestinians. The report was later pulled out following pressure by the US-Israel lobby.

PRC speaker pointed out that 300,000 Palestinians living in East Jerusalem have been shorn of their right to education, health care, employment, residency, and construction permits.

Mr. Habeeb added that Palestinians living in East Jerusalem have been subjected to forced deportation, banishment, and arbitrary home demolitions, policies which he said all emanate from Israeli intents to strike a demographic balance in favor of Jewish settlers.

PRC orator further warned of Israel’s underway attempts to prevent Palestinian refugees from returning to their homeland by all means possible and under racist pretexts including the alleged fact that Palestinians represent “a demographic threat” to the self-proclaimed Jewish State.

PRC’s statement is the fifth of its kind delivered during the 34th Session of the United Nations Human Rights Council (UNHRC) held in the Palais des Nations in Geneva from 27 February to 24 March 2017 to address the 47-member Council on human rights matters of national and international concern.