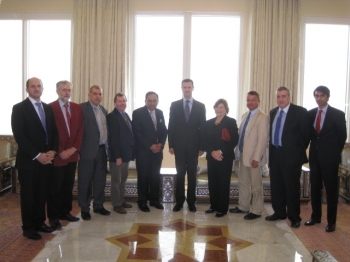 PRC organized the visit as part of its continuous effort to mobilize and raise awareness of the refugees whose plight is muted in the international arena and their basic human right to return to their home is obstructed. The delegation inspected the current conditions of Palestinian Refugees taking careful note of the terrible suffering especially those who fled the Iraqi war and are sheltering in Al Tanaf camp on the Syrian-Iraqi borders. The delegation also visited refugee camps sheltering Palestinians from the Nakhba in 1948 in Danon and Speina located south of the Syrian capital Damascus.

In describing their plight, the refugees, they spoke of their desire to return to their ancestral home in Palestine but also underlined their deep gratitude and appreciation to the Syrian government and people who have shown them great generosity for over Sixty Years. The delegation met with Syrian president Bashar Al Asad where they discussed different methods to ease the suffering of Palestinian refugees in the camps and more importantly to find an imminent solution for those stranded on the borders between Syria and Iraq. President Abbas, showed his keenness to close the camps and find a more long term and humane solution with all the infrastructure in place and with the support of the international community.

Member of the Delegation and PRC chairman of Board of Trustees, Muhamad Hamed, expressed great satisfaction after the meeting with Syrian President. "The meeting was positive as we touched upon the dilemmas and challenges faced by the Palestinian refugees. The Syrian president gave his support and willingness to contribute more to alleviating their suffering. We offered our sincere thanks to the President for housing around half million Palestinian refugees since 1948." Said Hamed The delegation met UNCHR representatives and heard about their daily operations in the camps. The delegation showed their appreciation and expressed their deep support for the Organization since it plays a crucial role in providing for the daily needs of the refugees. PRC General Director, Majed al Zeer, called on the international to show more support for the Palestinian refugees especially their right of return. He also called upon the international community to provide relief and support towards the immediate crises affecting 5,000 Palestinian refugees from Iraq. "PRC will follow up on the outcomes of this crucial visit as we have feel there is great momentum and positive reaction from the MPs. They are very concerned about this issue and will endeavour to bring an end to their plight." Said al zeer -END-