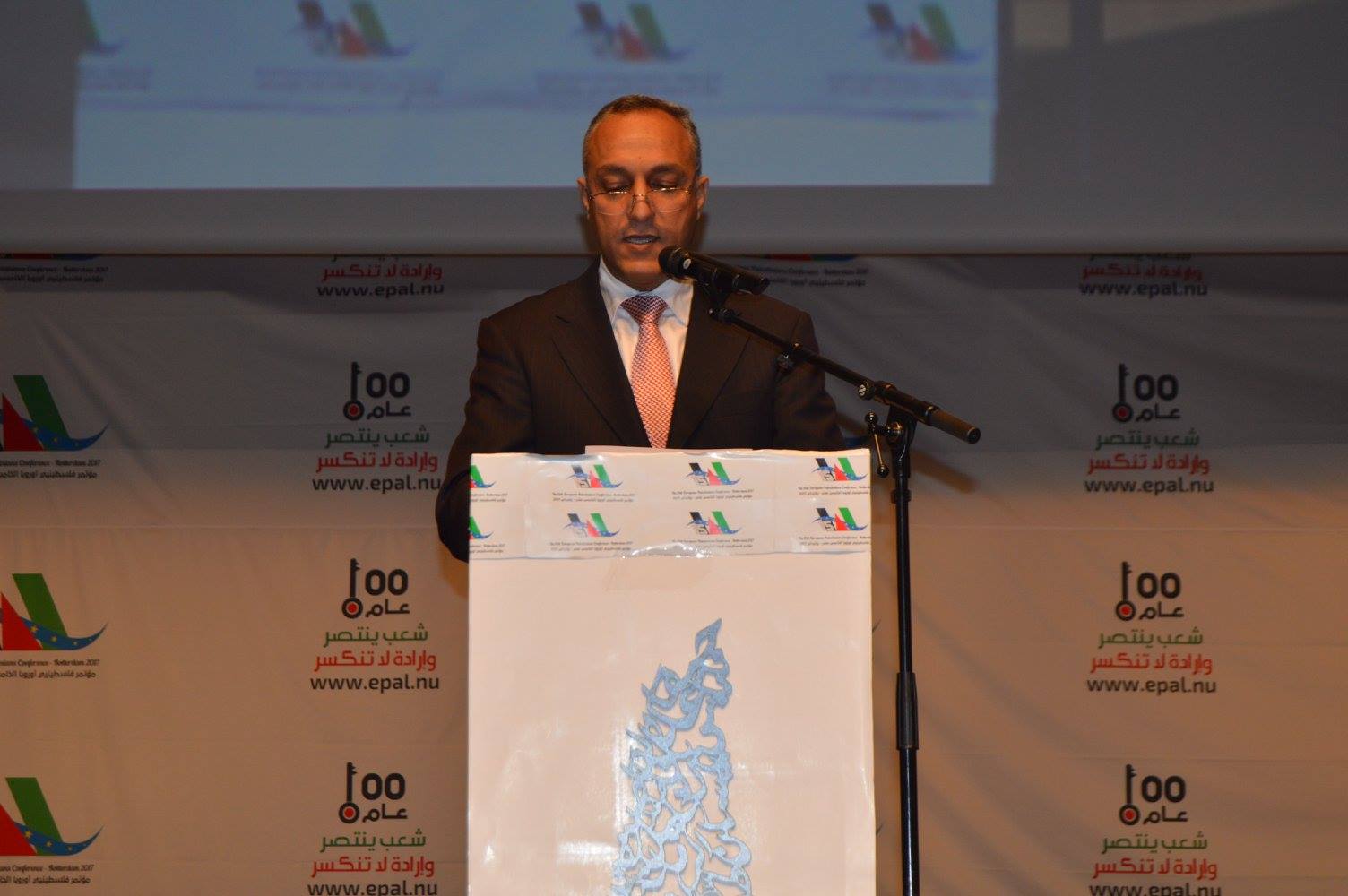 Thousands of Palestinians from across Europe attended the 15th Palestinians in Europe Conference, held in the Dutch city of Rotterdam under the Slogan “100 Years On, a Victorious Nation and Unbreakable Determination.”

The Rotterdam conference was wrapped up with the following statement:

First: We acclaim the commitment of the Palestinian community across the European continent to its right of return to Palestine, which is an irrevocable, indivisible, unchangeable, and irreversible individual and collective right. The Palestinians’ will keep up their legitimate and just national struggle until they restore their rights.

Second: We should hark back to the tragic fallouts of the Balfour Declaration on the Palestinian people over 100 years. We call on the United Kingdom to make an official apology for the pledge, which represents a flagrant violation of international law and of the principles of fairness and justice. The declaration has also forced Palestinians out of their homeland and tore down the very foundations of Palestinianhood.

Third: We believe that all standpoints regarding any project or initiative aiming to work out the Palestinian cause should take into consideration our people’s right to return to Palestine, to self-determination, and to emancipation from the Israeli occupation. Our people shall never give up their inalienable rights nor forfeit a single inch of their expropriated land.

Fourth: We strongly condemn the blatant Israeli violations against Occupied Jerusalem—the capital and beating heart of the future sovereign Palestinian State—and against the Palestinian people, homes, and institutions in the city. We have been keeping tabs on the simmering escalations and sacrilegious assaults against holy al-Aqsa Mosque—the third holiest site in Islam—and other mosques, along with churches, sacred places of worship, and Christian and Islamic awqaf (endowment) property. We have also been keeping track of the incessant Judaization attempts against Occupied Jerusalem since the takeover of the city’s western part seven decades ago and eastern part some 50 years ago. We do consider any attempt to transfer embassies to Occupied Jerusalem a rabble-rousing move.

Fifth: We have kept record of the swift pace of Israel’s settlement expansion on Palestinian land through recourse to a legal cover and the establishment of buffer zones to disremember Palestinian communities and fence them off within a chain of illegal settlement units and apartheid walls. The settlement activity has been upheld via land grab policy, confiscation of water wells, evacuations, and home demolitions in Occupied Jerusalem, the West Bank, and territories occupied in 1948 (Green Line).

Sixth: We have been following with profound concern the tightened decade-long blockade imposed on the Palestinians in the Gaza Strip, which we believe is a multi-layered crime that contravenes international law and the humanitarian and moral standards. Indubitably, our people will remain steadfast and will never throw in the towel. We call on the Palestinians nationwide and overseas to combine forces in the face of the crises rocking the besieged coastal enclave of Gaza, namely the salary crisis and the blockade, beyond partisan interests and concerns.

Seventh: We hail the Palestinian detainees, who have stood their ground in Israeli jails. Their cause will forever top the Palestinian agenda in Europe until all prisoners are freed, Israeli wardens prosecuted, and occupation jails turned into open sites for visitors from across the globe.

Eighth: We appeal to all governments and concerned bodies to treat the refugees and displaced Palestinians from such conflict zones as war-torn Syrian humanely. We demand that Palestinian refugee camps be neutralized and supplied with humanitarian aids at times of warfare.

Ninth: We stress the need to boost the involvement of the Palestinian Diaspora in national decision-making and institutions, including the Palestine Liberation Organization, a body which we believe should re-activate its role, restructure its institutions through democratic ballot votes, engage all Palestinians at home and overseas, and work on healing the national rift once and for all.

Tenth: We applaud the launch of the Conference for the Palestinians Abroad, which is again a sign of the commitment of the Palestinian Diaspora to prop up their active role and recuperate their infringed rights.

Eleventh: We appeal to the world’s states, institutions, and the European and international bodies to comply with their commitments to justice, human rights, and international law as regards the Palestinian cause and to work on isolating the Israeli occupation, urgently ceasing all forms of cooperation and partnership with such a colonizing entity, and taking a legal action against the flagrant Israeli violations against the Palestinian people.

Twelfth: The conference culminated in a series of recommendations and plans as follows:

*A meeting held by PalMed Europe and attended by dozens of Palestinian physicians in Europe launched calls for setting the stage for an international platform to boost cooperation and communication between Palestinian medics though a set of specific mechanisms.

The group pushed for propping up support for the medical sector in Palestine and urged the international medical institutions to assume their responsibilities as regards the exacerbated health condition in Palestine, particularly in the blockaded Gaza Strip.

The Assembly appeals to the international institutions to urge the Israeli occupation authorities to cease preplanned medical neglect against the Palestinian detainees.

PalMed calls on all Palestinian medics across Europe to adapt healthcare programs and mechanisms for the Palestinian people and Diaspora by joining medical delegations or internship programs at European hospitals.

PalMed appeals to its members to rally round the Palestinian medics from Syria in Europe.

*The Palestinian Women Meeting raised a number of issues regarding the active role played by women in reshaping the political arena. The gathering opted for a campaign to raise awareness of key-concepts as regards the Palestinian cause through the Palestine Remix platform.

*A meeting took place between Palestinian instructors and culminated in an agreement to launch the Assembly of Palestinian Instructors in the Netherlands.

*For the first time, the Palestinian Child Meeting was convened at the conference. The gathering discussed key concepts regarding the rights of Palestinian children and ways to boost national identity.

The seminar further called on the local communities and institutions for the protection of national identities and minority groups to smooth the integration of Palestinian refugees into the European communities. The speakers agreed to hold workshops and form local committees to those very ends.

Thirteenth: Everyone should bear in mind on the centenary of the notorious Balfour Declaration that the Palestinians will never throw in the towel and will forever stand up for their rights until their dreams see the day and rights are restored. We appeal to the world’s free people and human rights advocates, far and wide, to speak up for the legitimate Palestinian cause, boycott the Israeli occupation, rescind investments with Israeli institutions, and impose sanctions on such a colonizing entity.

The 15th Palestinians in Europe Conference.