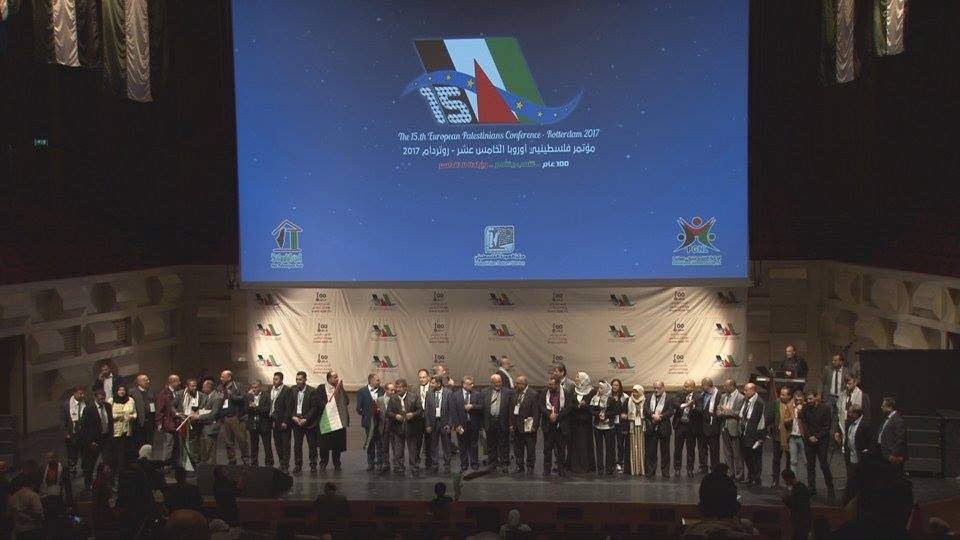 Thousands raised the Palestinian flag as they lined up outside the conference hall, before they headed to the entrance doors in such a civilized and refined manner, a statement published on the official website of the Dutch police read.

The police said they detected no braches of the Dutch law by the pro-Palestine masses who flocked to the conference hall.

Thousands of Palestinians and pro-Palestine activists from across the European continent attended the 15th Palestinians in Europe Conference which kicked off on April 15 in the Dutch city of Rotterdam, under the slogan “100 years on, a victorious nation and unbreakable determination.”

The conference was inaugurated by the Palestinian national anthem. An opening address by the conference’s general coordinator, Amin Abu Rashed, followed.

Other statements were delivered during the conference by such speakers as the head of the European Campaign to Lift the Siege on Gaza, Dr. Mazin Kahil, head of the Palestinian National Initiative, Dr. Mustafa AlBarghouti, secretary-general of the Federation of Islamic Organizations in Europe, Samir AlFaleh, PalMed Europe chairman, Dr. Mondher Rajab, the head of the Palestinian Women’s Association in Europe, Ms. Iman Abu Shweima, and  Dr. Ramy Abdou, chair of the Euro-Mediterranean Human Rights Monitor.

A preplanned ad hominem campaign was launched by the Israeli pressure groups in Europe, particularly in the Netherlands, to urge the Dutch authorities to call off the gathering by all means possible.

For the first time, the event hosted dual conferences in English and Arabic, in an attempt to reach a wider audience and garner the support of European diplomats and parliamentarians.

A seminar dedicated to the Palestinian child also proceeded in Tandem with the conference.

A number of pro-Palestine figures were also honoured at the conference.

PRC speaker Tareq Hamoud briefed the audience on the efforts made by the centre to urge the UK government to backtrack on its intent to celebrate the centenary and make an official apology over the tragic fallouts wrought by the pledge on the Palestinian people.

Executive director of the Action Group for Palestinians of Syria, Mr. Ahmed Hussein, delivered a thorough presentation on the legal steps opted for by the group to speak up for the Palestinians of Syria and document the violations perpetrated against them around the clock.

The conference was wrapped up by a concluding statement that stressed Palestinians’ unyielding commitment to their right of return, which is an indivisible, inalienable, and non-negotiable right.