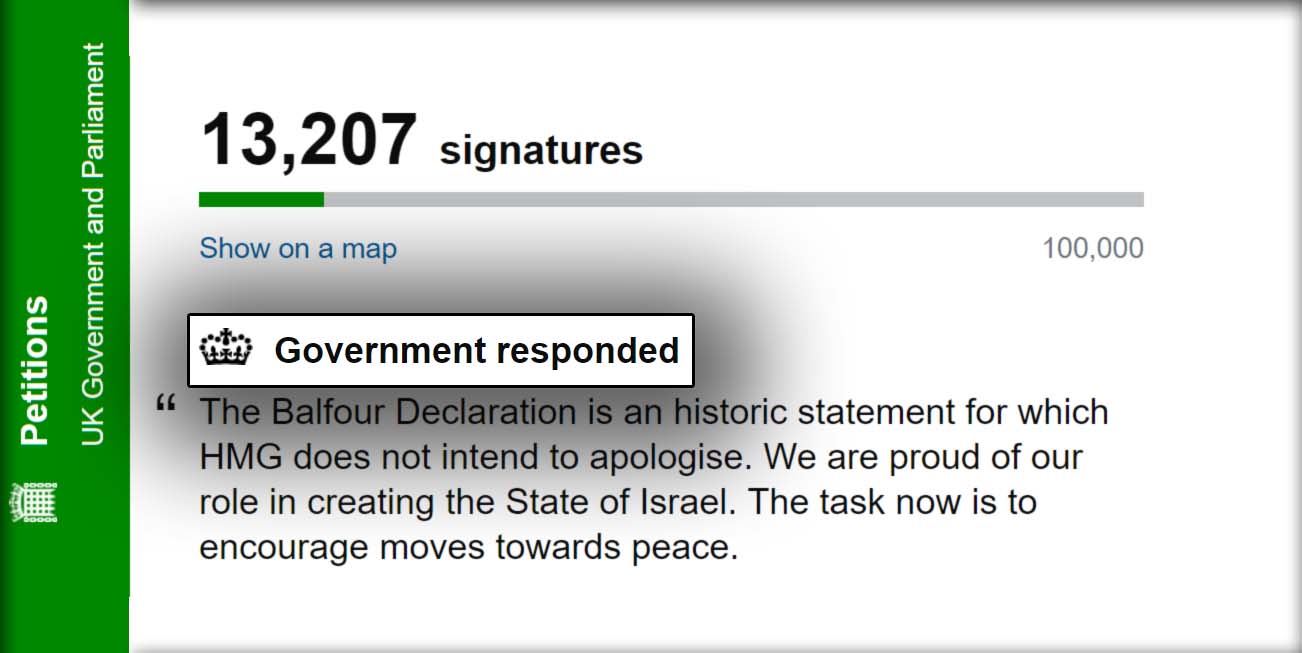 The Palestinian Return Centre has re-launched in October 2016, its campaign which started in 2013, titled as  “Balfour Apology Campaign”, demanding the United Kingdom Government to officially apologies for its past colonial crimes in Palestine.

On February 2017 the Palestinian Return Centre launched a petition on the British Parliament official website demanding Her Majesty’s Government to openly apologize to the Palestinian people for issuing the Balfour Declaration. The colonial policy of Britain between 1917-1948 led to mass displacement of the Palestinian nation and HMG should recognize its role during the Mandate and now must lead attempts to reach a solution that ensures justice for the Palestinian people. This petition has been signed by 13,269 signatures, in which guaranteed an official response from the British government.

Today, on 22 April 2017 the British government has responded officially, and its response has caused an outrage, deep disappointment and distress to Palestinian people.

It is alarming that the Government’s statement justifies the creation of Israel for religious reasons by stating, “In that context, establishing a homeland for the Jewish people in the land to which they had such strong historical and religious ties was the right and moral thing to do, particularly against the background of centuries of persecution.”

Such statement will only fuel the conflict as it gives religious motivation for the creation of Israel.

The statement shows ignorance of the facts and history and also ignore the Palestinian existence there for thousands of years.

In addition, the official response by the British government has also included a dangerous position in relation to the issue of illegal Israeli settlements, when including “land swap” as one of the elements that should be included in any suggested future two state negotiations, in which is illegal by international law.

And when it comes to the right of return to the millions of Palestinians that were drove forcibly out of their homes and lands by Israel as a result for Israeli atrocities in which Balfour Declaration was their umbrella to justify their horrific acts against the Palestinians, now the British government suggesting as part of the negotiation there would be an alternative solution for the Palestinians other than their right to return to their homes, in which is unacceptable, unjust and simply adopting the Israeli government position on the cost of the legitimate rights of many Palestinians.

The flaws-filled statement also misleads the public opinion that Britain is working towards the self-determination of the Palestinian people. For decades, the successive UK government failed in obliging Israel to achieve its peace process commitment and strengthened Israeli occupation, particularly the military industry.

We do not accept the official response that we have received from the British Government today, therefore, we will continue all our efforts, using all available channels, whether political, legal, public campaigns and media in order to gain the acknowledgement, the apology and the impartial political policies from the British government to the Palestinian nation collectively.

The British government denial of the Palestinian suffering as a consequence to its historic role in creating the ongoing injustice inflected on them, in addition to the current official position that the British government has communicated with us, we are left more determined to continue our legitimate campaign until we achieve all our outlined targets in this campaign.