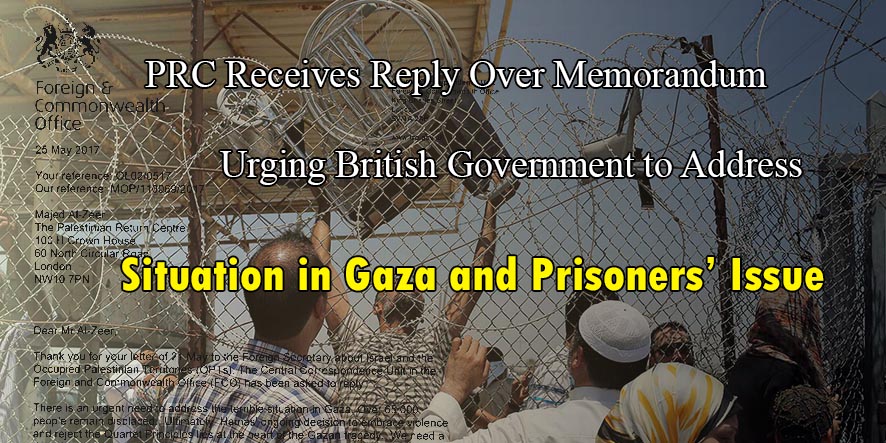 The Palestinian Return Centre (PRC) received a reply over a letter sent to the Foreign and Commonwealth Office (FCO) of Britain as regards the Israeli blockade on Gaza and the Palestinian prisoners’ cause.

FCO stressed the firm commitment of the British government to the promotion and protection of human rights and compliance with international law.

“We have a regular dialogue with the government of Israel with regard to the implementation of their obligations under international law and regularly and robustly raise our serious concerns on issues relating to Israeli actions in the OPTs,” FCO reply read.

FCO also raised concerns over Israel’s unwarranted implementation of administrative detention as a routine practice and a punitive measure in a barefaced contravention of international law.

“We continue to call on Israeli authorities to comply with their obligations under international law and either charge or release detainees,” the letter went on.

FCO reiterated the government’s concerns over the continued inter-prison transfers of Palestinian child and adult detainees by the Israeli prison authorities in violation of the Fourth Geneva Convention.

The British Foreign Office pushed for the full implementation of changes and for better treatment of Palestinians in Israeli jails. It further advocated for the mandatory use of audio-visual footages of investigation processes, a reduction in the use of single hand ties, and for the Israeli Authorities to inform more consistently detainees of their legal rights.

The Foreign office stressed the need for a durable agreement to address the terrible situation in Gaza, vowing to continue to urge the concerned parties to take urgent steps to ensure Gaza’s reconstruction and economic recovery.

A few days earlier, a memorandum was sent by PRC to FCO to urge the British government to opt for serious and practical steps to address the calamitous state of affairs in the blockaded Gaza Strip and to speak up for Palestinian hunger strikers in Israeli jails.