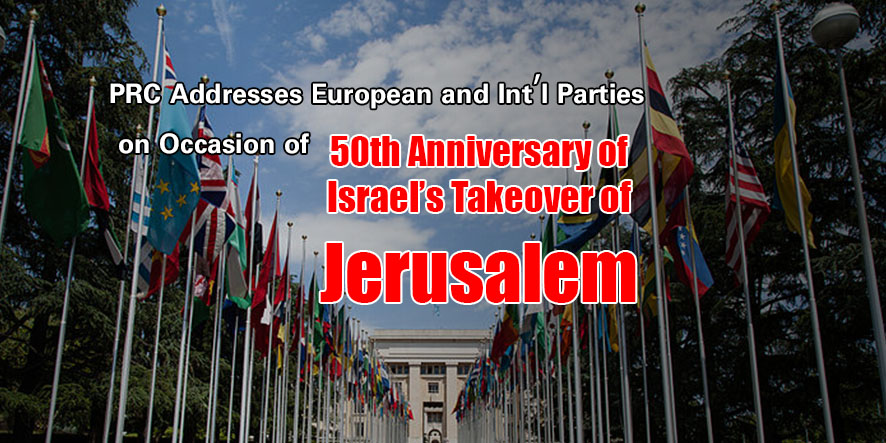 A set of memorandums were sent by the London-headquarted Palestinian Return Centre (PRC) to international and European bodies in an attempt to sound the alarm over the situation in Occupied Jerusalem, 50 years after Israel’s takeover of the city.

The UN Secretary-General Antonio Guterres, UNESCO’s Director-General Irina Bokova, and the British Foreign Secretary Boris Johnson, along with 47 diplomatic missions standing in for the Members States of the UN Human Rights Council, received awareness-raising letters over the status quo in Occupied Jerusalem and the Israeli violations against the native Palestinian residents of the city.

PRC memos spoke out against Israel’s ongoing takeover of Palestinian land in Occupied Jerusalem, the occupied West Bank, and the blockaded Gaza Strip for 50 years running.

The letters drew attention to the oppressive measures, racist policies, and preplanned crimes, including the Judaization of Occupied Jerusalem, home to the third holiest site in Islam—holy al-Aqsa Mosque—perpetrated by the Israeli government and forces.

The memos further raised alarm bells over the extrajudicial killing, forced deportation, arbitrary detention, and movement bans pursued by the Israeli authorities, as figures in a recent report by Human Rights Watch.

PRC letters warned of Israel’s breaches of international laws and conventions, most notably the Fourth Geneva Convention. The letters referred to Israel’s relocation of over 400,000 Israeli settlers across more than 127 illegal settlement outposts built on Palestinian land in the occupied West Bank as an authentic case in point.

PRC expressed concern over the upshots of the Israeli apartheid fence in the West Bank which it believes represents a flagrant violation of international humanitarian law.

PRC urged all concerned parties to opt for serious and strong measures so as to pressurize Israel to take on its obligations as an occupying power under international law and to halt its racist policies and oppressive practices on the ground.