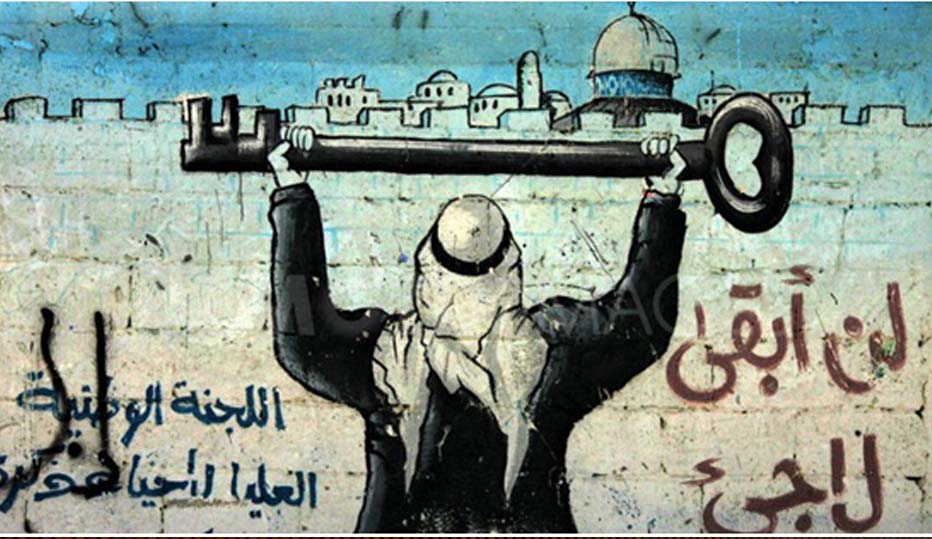 Today, less than a month after the 69th commemoration of the Nakba, is the occasion of World Refugee Day, which aims at memorialising the strength, courage and perseverance of millions of refugees. In the wake of the catastrophe of 1948 the Palestinian people have been expelled and displaced from their national homeland. Today, the estimated Palestinian world population is 12.7 million, over 6.8 million of those being Palestinians in Diaspora.1 The number of refugees registered under UNRWA is estimated to be 5.59 million, a vast number, which does not include Palestinians who were displaced between 1949 and the 1967 war and overlooks the vast number of unregistered refugees.

The ever-increasing number of Palestinian refugees and Palestinians in exile is a direct result of Israel’s systemic actions of ethnic dispossession and elimination. The majority of Palestinians became refugees due to Israel’s settler colonialism in Palestine. Dispossession was also a result of indiscriminate attacks on civilians, massacres, looting, destruction of property (including entire villages), and forced expulsion. Furthermore, house demolitions, revocation of residency rights and the construction of illegal settlements on confiscated Palestinian owned-land, has led to the internal displacement of over 57,000 Palestinians in the occupied West Bank.[i]

Res. 302 (IV) of 1949 established UNRWA with a specific mandate of providing relief and work programmes for Palestinian refugees. Over the years, the agency evolved and expanded its mandate to include a multitude of programmes involving the provision of education and healthcare services. UNRWA adopted a restrictive definition of Palestinian refugees as persons who resided in Palestine two years prior to the outbreak of hostilities in 1948 and who lost their homes and livelihoods as a result of that war.

With the establishment of the UN High Commissioner for Refugees, and the adoption of the Refugee Convention, a discrepancy arose between the mandates of UNRWA and the UNHCR. Firstly, the UNCHR offers the full spectrum of protection to persons of concern in compliance with the Refugee Convention. However, UNRWA, only has the mandate to provide relief, education, and other forms of humanitarian support.2 Secondly, those under the protection of UNRWA, were beyond the concerns of the UNHCR and were thus excluded from assistance thereby resulting in Palestinian refugees having less protection measures than other refugees. Such a protection gap, compounded with the inadequacies of inter-agency collaboration, has significant repercussions today given the ongoing conflict in Syria and the double-dispossession of Palestinian refugees residing there. For example, Jordan and Egypt have refused to recognise the refugee status of Palestinians fleeing Syria, asserting that Palestinians can only be recognized as refugees in Syria. The two countries have refused Palestinian refugees fleeing Syria to enter their territory thereby violating the prohibition on non-refoulement[ii] codified in Article 33 of the Refugee Convention.[iii] The UNHCR has been unable to effectively intervene on behalf of Palestinian refugees in this case.[iv]

There are five primary groups of Palestinian refugees and displaced persons.

$1-          The second group of Palestinian refugees is encompasses those Palestinians displaced for the first time from their places of origin in the West Bank, eastern Jerusalem, and the Gaza Strip, these refugees are often referred to as ‘1967 displaced persons.’

$1-          The third category of refugees includes those Palestinian refugees who are neither 1948 or 1967 refugees and are outside the Palestinian territories occupied by Israel since 1967 and unable due to revocation of residency, denial of family reunification, deportation, etc., or unwilling to return there owing to a well-founded fear of persecution.

‘refugees wishing to return to their homes and live at peace with their neighbours should be permitted to do so at the earliest practicable date, and that compensation should be paid for the property of those choosing not to return and for loss of or damage to property which under principles of international law or equity, should be made good by the Governments or authorities responsible.’[vii]

Furthermore, in 1974 UN GA Res 3236 clarified the right to return as an ‘inalienable right.’ Nonetheless, Israel violates its obligation to respect, protect and fulfill the Palestinian refugees’ right to return and provides three justifications for doing so. Firstly, Israel alleges that there is no ‘space’ in Israel to accommodate the returning refugees. This is a fallacy given that 80% of the Jewish population in present-day Israel inhabits 15% of the land.[viii] Secondly, it is advocated that the return of Palestinian refugees would undermine security and result in endemic conflict. Thirdly, the right to return is curtailed for fear of it resulting in erasing the Jewish nature of the state, such concerns highlight the discriminatory nature of this ‘democracy.’ Moreover, past agreements between Israel and the Palestine Liberation Organization (PLO) have avoided making an explicit reference to the right of Palestinian refugees and displaced persons to return to their homes of origin and have evaded creating actual obligations on Israel in relation to the right to housing and property restitution.

1Pcbs. "Conditions of the Palestinian People via Statistical Figures and Findings, on the Eve of the Sixty Ninth Annual Commemoration of the Palestinian Nakba." Palestinian Central Bureau of Statistics. N.p., 11 May 2017. Web. http://pcbs.gov.ps/post.aspx?lang=en&ItemID=1925. [Acessed 20 June 2017]

[v]Pcbs. "Conditions of the Palestinian People via Statistical Figures and Findings, on the Eve of the Sixty Ninth Annual Commemoration of the Palestinian Nakba." Palestinian Central Bureau of Statistics. N.p., 11 May 2017. Web. http://pcbs.gov.ps/post.aspx?lang=en&ItemID=1925. [Acessed 20 June 2017]