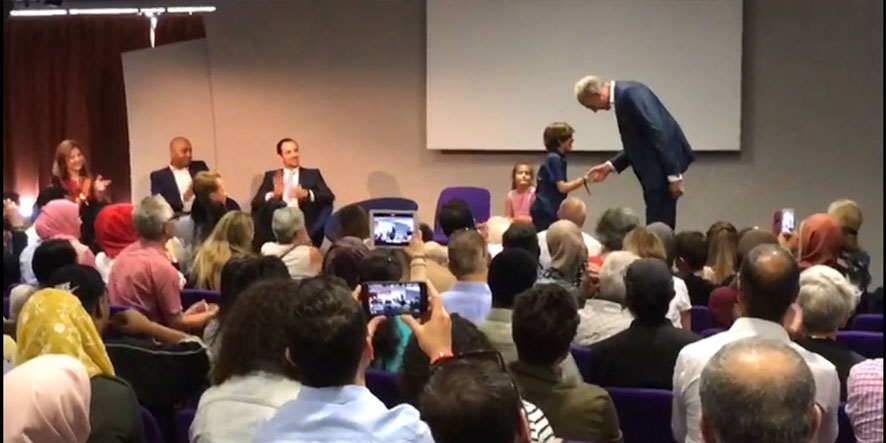 A short film screened by the Palestinian Return Center (PRC) on Saturday evening got a standing ovation at its London premiere.

The film, 100 Balfour Road, put on show for the first time at Queen Elizabeth II Centre in London, exerted a pull on dozens of activists and pro-Palestine figures.

The film, displayed as part of the Palestine Expo event, which bills itself as Europe’s largest Palestinian heritage event, also dovetails the Balfour Apology Campaign launched by PRC to urge the British Government to apologize for the notorious Balfour pledge.

The film spotlights the story of a British family who are driven out of their home by the British government and forced to live in a cramped shack in the backyard. Another family—the Smiths—take possession of the house and put down roots in the building, leaving the real houseowners—the Jonees—with neither food nor medicines. Heavily-armed soldiers escort the settlers at the same time as they tighten the noose around the neck of the Johnees and deprive them of their basic rights.

The show was wrapped up by a seminar during which PRC delegates and the film producers briefed the audience on the challenges faced all the way through the pre-screening phases.

The leading actor Tim Bartholomew, who played the character of Balfour, expressed his heartfelt pride of the positive responses garnered by the premiere.

He said though he did not know much about Balfour Declaration previously, he believed, deep inside, that the tragedy of the Palestinians did not occur out of the blue.

“I am now more aware than ever of the truth. It is high time we reacted to the tragedy. On behalf of Arthur Balfour, I would like to apologize to the child Henry and to the Palestinians for the harm wrought by the pledge for over 100 years,” said the protagonist.

Responding to a question by journalist Rawan AlDhamen on the cast, the Palestinian-British film director, Anas AlKarmi, said British actors were selected to play the leading roles in order to strike a chord with the targeted audience and make the British people identify with the victims.

PRC’s Public Relations and Communications chief, Sameh Habeeb, sounded the alarm over Britain’s historical responsibility over the upshots of the Balfour pledge, which forced the Palestinians out of their homes and robbed them of their right of return to their motherland.

“The right of return is inalienable and can never be subject to a statute of limitations,” said Habeeb.

The scenario was composed by prominent English screenwriter and film director Richard Beer, best known for his “One Second a Day” video clip, which relates the story of a young girl whose life gets upside down in the raging Syrian warfare. The video was seen by over 57 million people on YouTube.