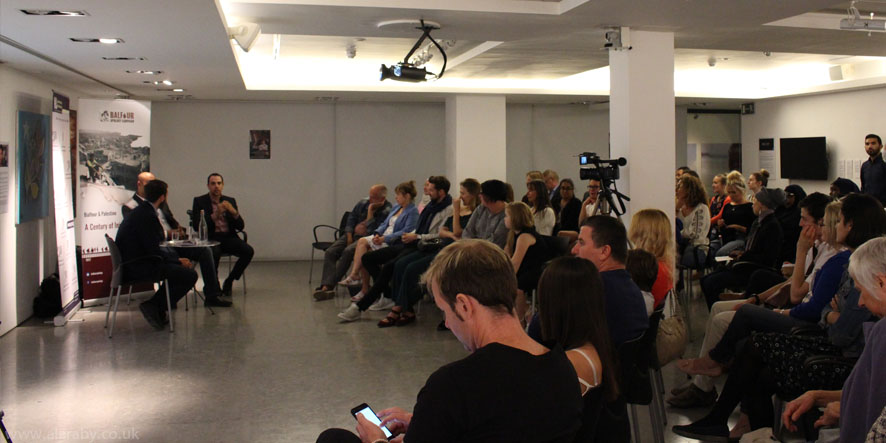 The London-based Palestinian Return Centre (PRC) held the second screening of the Balfour Road short film, garnering a round of warm applauses from the audience.

The film, put on show for the second time in London, in cooperation with Imagine Production, dovetails the Balfour Apology Campaign launched by PRC to urge the British Government to apologize for the notorious Balfour pledge.

Speaking during a seminar held on the sidelines of the screening, head of PRC’s Relations and Communications Department, Sameh Habeeb, said the film is a true-to-life re-presentation of the oppressive fallouts of the Balfour Declaration.

According to Habeeb, the film is a heavy blow dealt to the biased chronicles on the Palestinian-Israeli conflict.

Palestinian-British film director, Anas al-Karmi, said the film puts on show realistic footages in order to strike a chord with the targeted audience.

Actor Tom Coulston, who played the role of Mr. Jones, expressed his heartfelt pride of being part of the cast, saying the character he engaged himself in gave him a valuable opportunity to better grasp the historical twists of the Balfour pledge.

The film spotlights the story of a British family who are driven out of their home by the British government and forced to live in a cramped shack in the backyard. Another family—the Smiths—take possession of the house and put down roots in the building, leaving the real house owners—the Johnees—with neither food nor medicines. Heavily-armed soldiers escort the Smiths at the same time as they tighten the noose around the neck of the Johnees and deprive them of their basic rights.