100 Balfour Road is out now 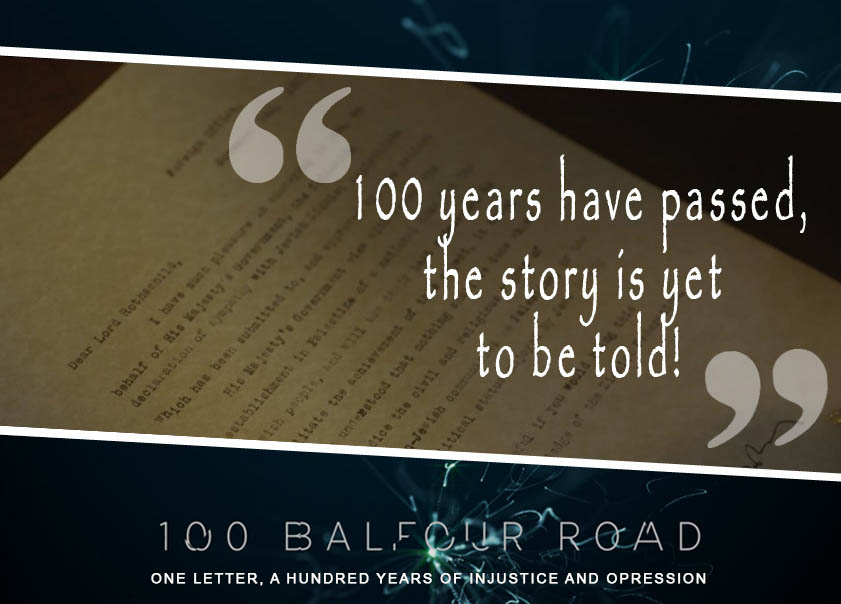 One Letter, A Hundred Years of Injustice and Opression!

A Short Film by

Can we still be held hostage by the actions of our past? Is it possible for a decision to mean well for a group and brutally impoverish another? The answers you seek lies in “100 Balfour Road” as the movie brings to you the visual effects of the Balfour Declaration of 1917.

The declaration was a power statement made by Lord Arthur Balfour in 1917 to the leaders of the British Zionist community granting them the power to establish a national home for the Jewish community in Palestine.

This declaration changed the history of Palestine, putting to sword the relative peace in that region and giving birth to years of conflict, war, oppression, displacement and even death of thousands of Palestinian lives.

This year makes it one century since the obvious dangerous decree was made and the effects are still living with us today, the displacements and operation that followed the declaration are still imminent. There are over 7 million Palestinian refugees living in abject poverty all over Palestinian territories, Jordan, Lebanon, and even Syria.

Major cities of Palestine origin as a still held hostage or colonized by settlers legalized by the declaration, an example is the city of Gaza and the west bank which is still under military occupation for over 50 years.

We all owe Palestine a heartfelt apology, especially the British government for the calamity the Balfour declaration brought to their country. The British government should take responsibility for their actions acknowledge their role in fueling one of the most brutal ethnic cleansing that followed the Balfour Declaration. Although severe damage has been done as a result of the declaration, rendering a heartfelt apology will help heal the wound faster.