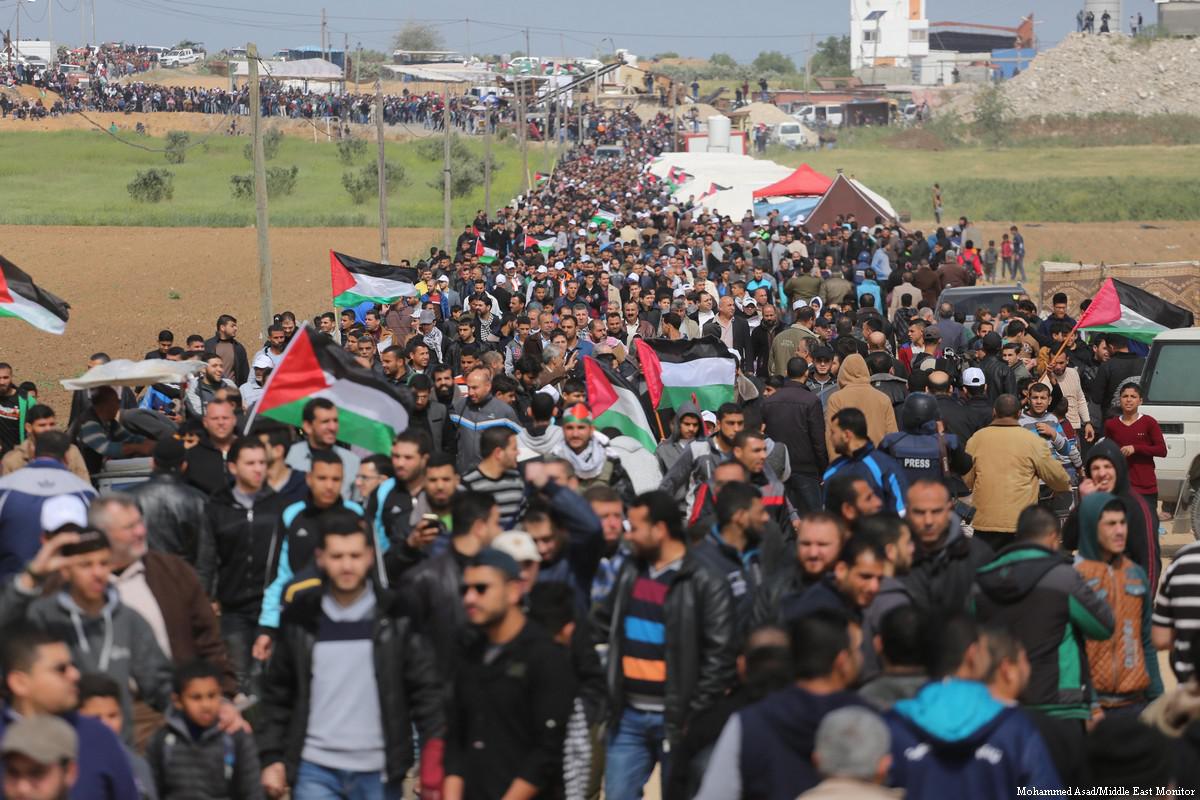 On Arpil 27, the Great March of Return continued for the 5th Friday , labelled ‘rebellious youth’ in honour of the youth killed during the protests[1]. Following noon prayers, hundreds went to near the Israeli fence where tents are placed on 5 camps across the Gaza Strip (East Gaza, North Gaza, East Rafah, East Buraij and East Khan Younis). Total number of people who participated last Friday was estimated around 10,000 protesters[2]. Protesters burnt tyres, attempted to damage the fence, threw rocks and flew kites reportedly with flaming materials attached to them into the green line. It was also reported that some protesters attempted to break through the fence in east Gaza.

The Israeli forces responded by firing rubber bullets and tear gas canisters as well as live ammunition. The result was 4 killed and around 955 injured, of which 76 are children and 39 women, 178 of the injuries caused by live ammunition. Since the start of the protests on 30th March, there have been 43 killed, including 4 children and over 6400 injured, at least 530 are children, 3897 were hospitalised, including 1917 from live ammunition, while no injuries from the Israeli side[3]. On 27th April, one of the Trauma Stabilisation Point was temporary stopped after being hit with a teargas canister, 9 medics were treated from suffocation from teargas inhalation. Since the start of protests 77 health personnel were injured and 14 ambulances were damaged[4]. According to Amnesty International analysis victims were shot in the upper body, including the head and chest and some from behind which shows they were deliberately killed or injured while posing no immediate threat to the Israelis.

In addition, many injuries resulted in extreme bone and tissue damage which is likely to lead to further complications, there is also high number of injuries to the knees which increase the probability of bullet fragmentation which suggests that Israeli army is intentionally intending to inflict life changing injuries. Gaza hospitals are unable to deal with the high number of injuries due to lack of electricity and medical supplies and Israel has been denying or refusing to transfer some of the patients in need of urgent specialised medical treatment in the West Bank[5].

Amnesty International has called for an arms embargo on Israel due to its disproportionate and unlawful killings of peaceful protesters. The UN Secretary General as well as the OHCHR has called for independent investigation into the killing of peaceful protesters and use of excessive force by the Israeli forces. UN High Commissioner for Human Rights Zeid Ra’ad Al Hussein stated “The loss of life is deplorable, and the staggering number of injuries caused by live ammunition only confirms the sense that excessive force has been used against demonstrators – not once, not twice, but repeatedly, I am doubly concerned by reports of unusually severe injuries resulting from the use of live ammunition. Furthermore, many of those seeking treatment outside of Gaza have been refused permits by Israel to leave, which has increased the suffering.”[6]