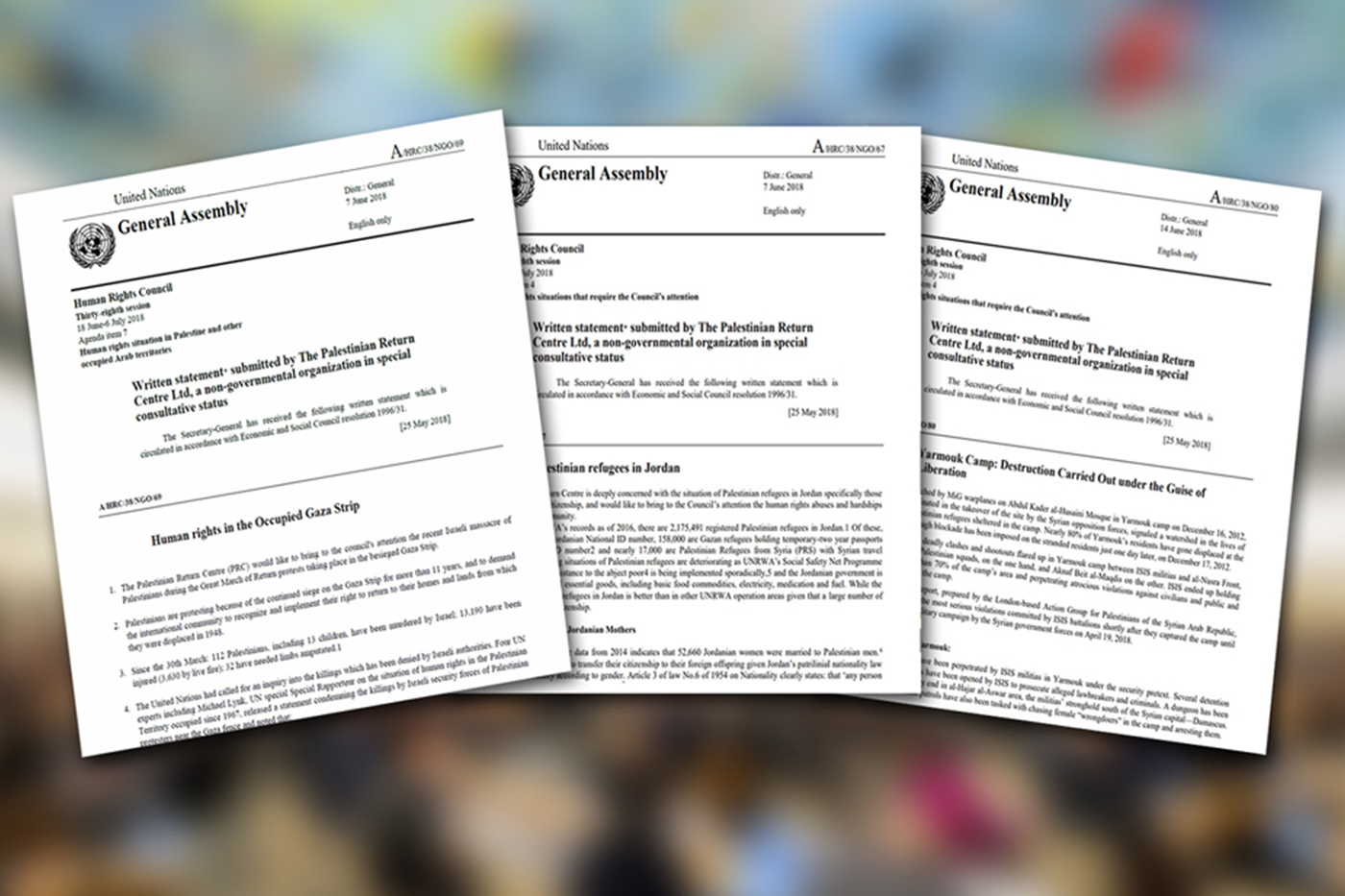 Three reports on the situation of Palestinian refugees in Gaza, Syria and Jordan were submitted by the Palestinian Return Centre (PRC) at the UN Human Rights Council, bringing a fruitful participation in the council’s 38th session to a close.

The first report, entitled “Yarmouk: Destruction under the Guise of Liberation”, spotlights the disastrous fallouts of the military offensive launched by the Syrian government forces and its war allies against Yarmouk Camp since mid-April 2018.

The report highlights the damage wrought on infrastructure and civilian homes, along with the forced deportation of residents prior to the conclusion of an agreement stipulating the retreat of armed militias and thousands of Palestinian civilians toward northern Syria.

The report, the by-product of joint efforts by PRC and the Action Group for Palestinians of Syria, underscores violations by ISIS outfits against Yarmouk residents and the longer-term aftermaths of the massive destruction inflicted on the camp, which remains an enduring symbol of the Palestine Refugee diaspora and of the extreme human costs of the devastating conflict in the country.

The second report, bearing the title “Palestinian Refugees in Jordan”, draws attention to the nationality restrictions enforced by the Jordanian authorities on Palestinian children born to Jordanian mothers and the repercussions of such restrictions on their access to education, health care, labor force, and public facilities. Children born to mothers married to Palestinians from Syria have been enduring a vulnerable legal status and shorn of their right to citizenship status as they are considered children of “stateless” parents by the Jordanian authorities.

The third report covers ten facts as regards the Israeli violations against the Great March of Return staged at the Gaza border and calls for the launch of an international fact-finding probe into the escalation.

Outlining the motives behind the protests, the report urges the UN and its affiliated bodies to take urgent action and work on rehabilitating Palestinians’ inalienable rights, which are not subject to a statute of limitations.

The reports will be roped in the United Nations’ archive of official documents which can be received electronically through the UN Official Document System search. UN documents can be accessed by keywords.

PRC has just concluded its active participation in the 38th session of the UNHRC held from June 18 to July 6 in Geneva.