PRC Conference: Focus on History of Palestine and 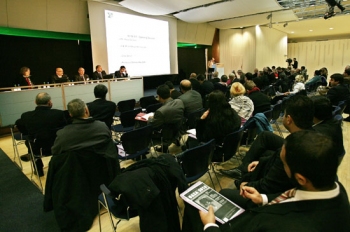 Professor Abu Sitta continued Session One by discussing why UNRWA can be considered an ‘unsung hero’ for the Palestinian refugees.

Briefly describing how Palestinians became refugees, he commented that they were forcibly expelled from their land due to Israeli massacres and that 675 Palestinian villages were ethnically cleansed.


UNRWA responded by creating 59 official camps to help shelter these refugees and provide them with necessary services. These camps were set up within the West Bank, Gaza, Syria, Jordan and Lebanon.

In addition to the provision of services, UNRWA has kept a record of where these Palestinians fled from and to. This has enabled UNRWA to effectively map where these Palestinians would return to, should they finally be given their right to return to Palestine, in accordance with Resolution 194. In Galilee, for example, 90% of the depopulated village sites are still vacant today and would be able to home Palestinians once more. The right to return for Palestinian refugees is therefore not only q right they are owed but is also feasible, practically.

With thanks to UNRWA, therefore, Palestinians have been provided with an identity and a sense of their own history within Palestine, in addition to the essential services and shelter that it has provided them with.

Dr. Daud Abdullah concluded Session One with an explanation of the Zionist ideology that motivates the Israeli state and the development of this ideology from the 19th century.

In the early 20th century, there were only 56,000 Jews in Palestine, compared to 1 million  Palestinians. For the Zionist ideology to succeed, whereby a national home for the Jews could exist and develop into a strong state, this population imbalance would have to be forcibly addressed. The increasingly ethno-centric ideology of Zionism has therefore led to the ethnic cleansing of Palestinians from their land, with the destruction of homes and infrastructures and the forcing out of Palestinian citizens into neighbouring Lebanon and Jordan.

It is this ideology that continues to motivate Israeli policy and continues to threaten Palestinian refugees living within Gaza and the West Bank. It is also this policy which leads to the continued refusal to allow Palestinians their internationally recognised right to return.