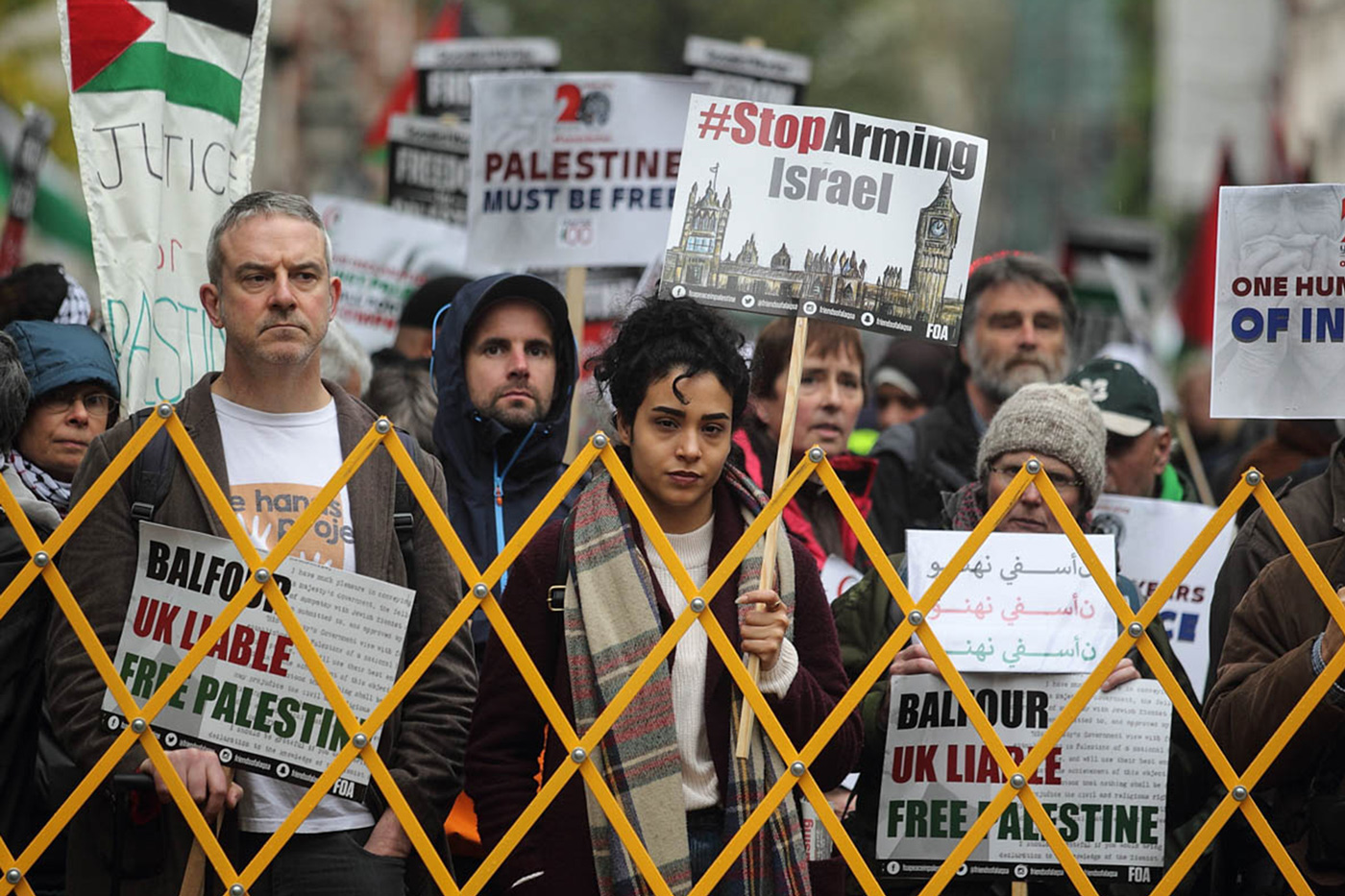 As the fallouts of the notorious Balfour Declaration, made in 1917, continues to ruin Palestinians’ present and future as an incurable cancer does a man’s vulnerable body, efforts have been under full swing to urge Britain to make an official apology to the affected peoples, particularly, but not exclusively, the Palestinians.

Though an apology never ends up healing the grave wounds inflicted on a people’s memory and history, it is, nonetheless, a moral, historical, and historical debt that the “offender” owes to the “victim.”

The efforts made by the London-based Palestinian Return Centre (PRC) in this regard have been on the go over recent years to urge Britain to apologize to the Palestinians for the tragedy that has befallen them as a result of the Balfour Declaration, a letter sent by the UK’s Foreign Secretary Arthur Balfour to Lord Rothschild, a leader of the British Jewish Community, green-lighting the establishment in Palestine of a national home for the Jewish people.

The Balfour Apology Campaign (BAC), kick-started by PRC some six years ago, falls exactly within the above context as it matches ongoing endeavors to hold Britain historically, morally, and politically accountable for the dispossession and displacement of 750,000 civilians from their own and only homeland—Palestine—to give way for the establishment of the self-proclaimed state of Israel.

As a result, nearly 7 million Palestine refugees have become scattered all over the world, torn from the nourishment of home and the warmth of family.

Ever since the pledge saw the day, the Palestinians have seen it all. Extrajudicial murders, mass genocides, arbitrary abductions, administrative detention (sentence with neither charge nor trial), racial discrimination, religious persecution, and home demolitions, among dozens of other internationally-condemned crimes, have been among the violations perpetrated by the Israeli occupation forces and authorities against the Palestinian people.

At the same time, an eleven-year-long blockade on the Gaza Strip has made life quite unbearable in the enclave, turning in it to what has been referred to as the world’s “largest open-air prison”.

The Palestinians have also been denied their basic and most precious rights, namely the internationally-recognized right to self-determination.

A set of tools and mechanisms have been implemented by BAC, which came into being by the end of 2012, in order to step up pressure on the UK government and push it to confess to its historical responsibility over the upshots of the anti-Palestine promise.

Reaching out to a plethora of British and EU diplomats and MPs, PRC has been striving to mobilize worldwide support for the campaign and communicate its demands to official bodies, mainly the British government. Contacts have been held around the clock with NGOs, youth movements, and student events to that very end.

In 2013, a conference was staged by BAC under the title “The Legacy of Britain in Palestine”. The event spotlighted Britain’s imperialistic history and its ideology-motivated policies in Palestine.

The conference tackled the impacts of the First World War and the repercussions of the ensuing political agreements on Palestinian land and rights.

The conference culminated in a book comprising a bundle of research papers by academics, diplomats, and researchers who took part in the event.

PRC re-introduced the campaign during a seminar hosted by Baroness Jenny Tonge in response to Britain’s attempt to celebrate the centenary of the Balfour Declaration. The seminar was chaired by Lord Norman Warner.

A short movie bearing the title “The Road to Balfour” and released on October 30, 2017, draw the world’s attention to the calamitous repercussions of the Balfour Declaration.

Available in 17 different languages (English, Arabic, Spanish, Danish, Dutch, Swedish, Polish, Italian, Turkish, Hindi, Urdu, Farsi, Chinese, Russian and Indonesian) and broadcast in 25 cities around the globe, the film puts on display the story of a British family who are driven out of their home by the British government and forced to live in a cramped shack in the backyard. Another family—the Smiths—take possession of the house and put down roots in the building, leaving the real house owners—the Johnees—with neither food nor medicines. Heavily-armed soldiers escort the Smiths at the same time as they tighten the noose around the neck of the Johnees and deprive them of their basic rights. The film was premiered inside Queen Elizabeth Hall in London.

An online platform was also launched by BAC campaigners to pass on e-memorandums and give the floor to pro-Palestine activists from around the world to speak up their minds, indirectly address the British government, and urge the Royal Albert Hall to backtrack on its decision to host a centennial celebration of Balfour Declaration.

The move garnered widespread back-up as in no more than three days over 11,000 memos were dropped into the email of Royal Albert Hall.

In 2017, an e-petition headed up by PRC and launched on the official website of the British Parliament, attracted fewer than 14,000 signatures by British nationals. Duty-bound to respond to the petition, after it managed to pass the benchmark for an official response, the never-sorry government responded 10 days later, only to confirm that it will not extend any apology over the Balfour pledge.

“The Balfour Declaration is an historic statement for which HMG does not intend to apologize,” the government said at the time. “We are proud of our role in creating the State of Israel. The task now is to encourage moves towards peace.”

A spokesperson said the Declaration was written in a world of “competing imperial powers” as the First World War raged and Ottoman Empire diminished, claiming: “In that context, establishing a homeland for the Jewish people in the land to which they had such strong historical and religious ties was the right and moral thing to do, particularly against the background of centuries of persecution.”

Yet, the Government’s statement accepted that the Declaration “should have called for the protection of political rights of the non-Jewish communities in Palestine, particularly their right to self-determination” but said that lasting peace must now be established through a two-state solution.

The response sparked universal condemnation, with activists and NGOs dubbing it as a sign of Britain’s failure to pay heed to the horrendous crimes committed by Zionist gangs who crept into Palestine during the British Mandate and embarked on systematic massacres and ethnic genocides that brought about the displacement of millions of Palestinians from over 570,000 Palestinian villages in 1948.

Over the past six years, BAC has been subjected to ad hominem campaigns waged by the Israeli Lobby.

Baroness Jenny Tonge was made to step down from her post, amid an outcry of her anti-Israel rhetoric. Counterfeit accusations were filed against her by the Israeli Embassy and other pro-Israel media outlets. The accusations were triggered by the event she hosted at the House of Lords that featured critical observations about the Balfour Declaration of 1917, in which the United Kingdom committed to viewing favorably the establishment of a Jewish national home in what would later become the British Mandate on Palestine.

Sometime later, the Parliamentary Committee for Privileges and Conduct dismissed allegations of anti-Semitism against Baroness Jenny Tonge for hosting the launch of the Balfour Apology Campaign on October 25th 2016, in the House of Lords.

It was alleged that Jenny Tonge has breached the Code of Conduct, which requires members to act on their personal honor but the Committee has decreed resounding results, proving that Baroness Tonge did not breach the Code of Conduct in her hosting and chairing of the meeting on the parliamentary estate.

The false accusations of anti-Semitism from the media and the Israeli Embassy were categorically refused by the Committee for Privileges and Conduct, and the investigation refuted as well the claim that the comments made by the member of the Naturei Karta amounted to ‘Holocaust denial’.

In the meantime, dozens of seminars and meetings have been convened by PRC in London and other European cities, in tune with its ceaseless endeavors to speak up for Palestinians’ inalienable rights.

Through its fruitful involvement in the UNHRC’s sessions, PRC has managed to draw the attention of a consortium of NGOs, EU diplomats, prominent activists, and influential high-ranking stakeholders to the intrinsically-monolithic character of the Balfour Declaration—the promise of he who does not own to those who do not deserve it.

The Palestinian Return Centre (PRC) is an independent, non-partisan, organization committed to advocating for Palestinian refugees, in accordance with the historical, political and legal basis of the right to return.

PRC educates the public, defends human rights, and empowers Palestinian refugees, in order to put the plight of the refugees back on the political agenda.

Although the PRC is Palestinian in origin, it is not affiliated with any particular organization or party. It works on the assumption that the plight of the Palestinians is not just a national liberation movement but is, in essence, about the core values and ideals that are at the centre of any human civilization and international law.