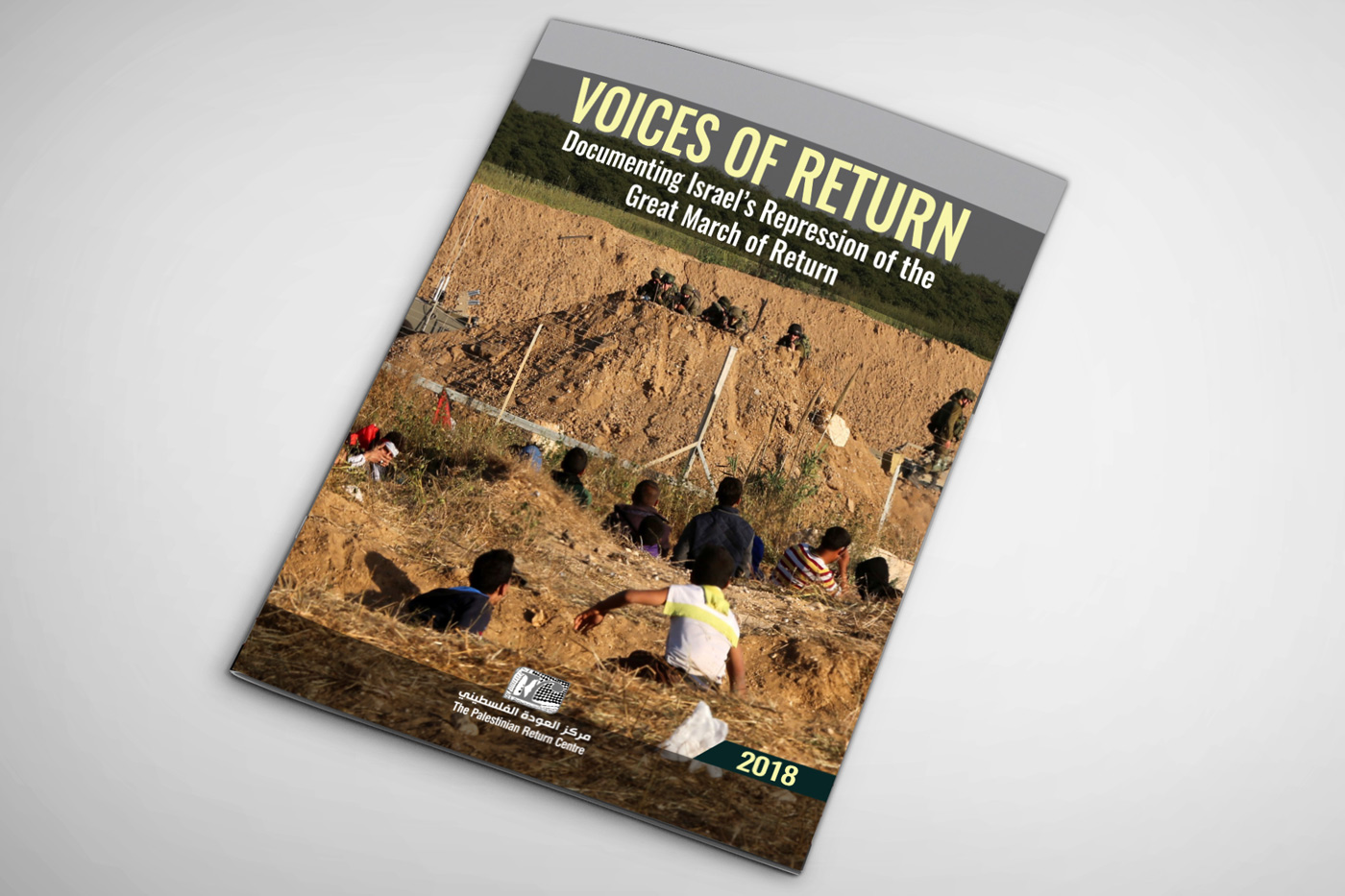 On the 70th anniversary of UN resolution 194, the Palestinian Return Centre (PRC) launches a new report "Voices of Return: Documenting Israel's Repression of the Great March of Return." This new report is based on a PRC submission to the United Nations Commission of Inquiry on the 2018 protests that began on March 30th in the Occupied Gaza Strip. The series of demonstrations named by the organizers “Great March of Return” called on Israel to end the ongoing siege and implement their collective right of return to the lands from which they were displaced in 1948.

The demonstrations have been widely covered in the mainstream media, in particular around May 14th, when the Israeli military killed 52 Palestinians and injured over 2,400 in one single day.  Yet, beneath the headlines and numbers of casualties, detailed witness accounts of the events remain underreported. This investigation seeks this fill gap by bringing to light the voices of Palestinian protesters and victims injured during the demonstrations.

The testimonies and other information gathered in the report show in detail how Israeli soldiers shot unarmed protesters, bystanders, journalists and medical staff approximately 100-400m from the fence, constituting extrajudicial executions and deliberate maiming of civilians. Prima facie evidence and testimonies show that none of the Palestinians victims included in this report were endangering Israeli forces, who remained located on the other side of the fence.

The PRC interviewed two journalists who were both shot in their legs while wearing a "press" vest. Khalil was shot  in the upper left thigh while standing approximately 200 meters away from the fence and was wounded while taking a "selfie" photo with friends. Khalil further claims that the Israeli military shot him from the back as he was not facing the barrier separating the Gaza Strip from Israel. The other journalist interviewed, Duaa, was hit by a sniper shot as she was filming another protester being treated by paramedics after being injured. Both journalist were hit with a particular type of bullet, which expand and mushroom inside the body, that indicates the military's intention to cause maximum harm and greater possibility to inflict life-changing injuries. Amnesty International has reported Israel's use of US-manufactured M24 Remington sniper rifles shooting 7.62mm hunting ammunition, which have the "mushrooming" effects described by the victims we interviewed.

Jihad, a young Palestinian woman in her twenties was standing on Jakar street, a road roughly parallel to the fence separating the Gaza Strip from Israel, at approximately 100 meters from the barrier when she was first hit with hunting ammunition in her left leg below the knee. Jihad was further hit two times, in her right hand and shoulder, with regular bullets by gunshots seemingly targeting the medical staff that was attending to her.

PRC interviewed a child that lost a leg after being targeted for merely raising the Palestinian flag during one of the demonstrations. Muhannad was also tending to a fellow protester injured at the time he was shot. He was hit with hunting ammunition above the knee in the thigh which likely caused him to undergo arterial amputation.

"The bullet came in from my ear and out from my head." said Adelmalek, an 18-year old who was shot while standing 300 meters from the fence near Aoude refugee camp, East of Jabalia. Another young Palestinian, Ouni , was hopeful that the peaceful demonstration will be effective as he explained "We wanted to push for lifting the siege, unblock border crossings . . . we simply wanted to live a normal life!"  He was also seemingly shot with hunting ammunition that caused bone fragmentation in his leg, as he expressed relief at having avoided amputation.

Contrary to claims of Israeli authorities, a grassroots network of activists led the creation and organization of this series of mass demonstrations. The report provides in-depth accounts by organisers and participants in the "Great March of Return" that details their motivations and goals for the demonstrations.

The report argues that driving the open-fire policy of the Israeli government against protesters is a longstanding criminalization of Palestinian refugees attempting to cross the armistice lines. Palestinian refugees are criminalised by the Israeli state and media as "infiltrators" and prevented to return to the lands from which they were displaced through a series of state laws and policies. The categorization of 'refugees' as 'infiltrators' thus provides the Israeli government the opportunity to enact legalized state violence against Palestinians attempting to return to their lands.

Israeli authorities have attempted to paint the protests as an invasion of Israel's borders with misleading representations of the nature of the fence that separates Gaza from Israel. Israel declares that it is protecting its border from Palestinian "infiltrators" yet this claim is undermined from the fact that since its inception the state of Israel has yet to officially declare its borders.

The PRC concluded that the Israeli army's response to Palestinians protesting against a colonial siege along the 1949 armistice line clearly violates a number of core principles of international humanitarian law. The killing and maiming of protesters, journalists, paramedics and children not engaged in any military activity amounts to a violation of the international legal principles of distinction, proportionality and of precautions in attack.

Short Link : http://bit.ly/2EeeQ1u
Tags
Next Article
Voices of Return: Documenting Israel's Repression of the Great March of Return
Previous Article
PRC's Statement on the International Day of Solidarity with the Palestinian People
Most Views
Related Posts