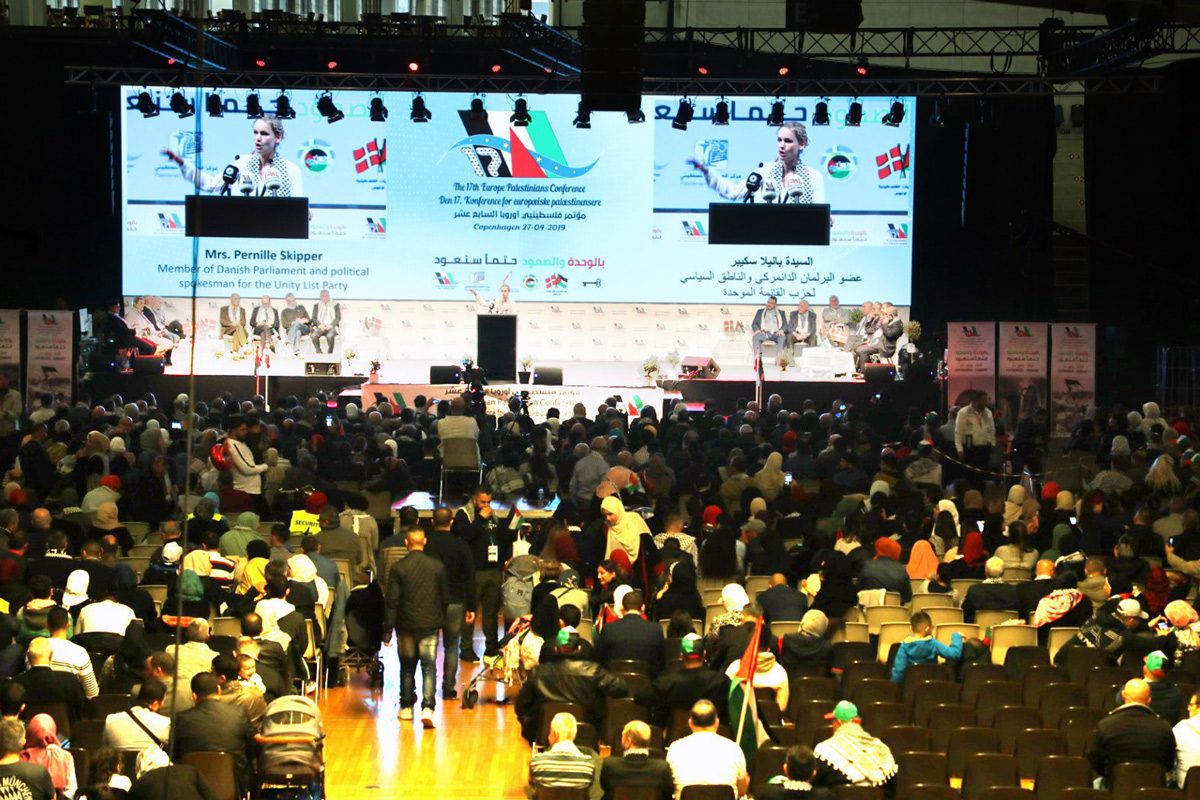 Saturday, April 27, 2019 marked the launch of the 17th Palestinians in Europe Conference in Denmark’s metropolitan capital city Copenhagen under the slogan “With Unity and Steadfastness, We Shall Return”. Some 15,000 Palestinian refugees, activists, and NGO representatives from Europe have been attendance.

Chairman of the conference Majed AlZeir said the event falls in line with popular pro-Palestine support and activism across Europe.

According to AlZeir, the mass-participation of thousands of people in the conference sends a strong message to the US administration and is an incontestable proof that the Palestinians will never yield in to the US Middle East peace plan dubbed “the deal of the century”.

Addressing the audience, head of the Conference Committee, Husain Khader, said Palestinians living inside and outside of Palestine are one and the same. “No single party has the right to take decisions on behalf of the Palestinians in Europe, Gaza, the West Bank, Jerusalem, and the diaspora”.

“Unity is the basic strategy toward fruitful pro-Palestine activism in the European Continent”, he added.

Chairman of the 1st Palestinians Abroad Conference, Anis Kasem, sounded the alarm over the stumbling blocks set before the Palestinian cause in light of the biased pro-Israel measures pursued by the US administration and the violation of international legitimacies to that end, including Donald Trump’s recognition of Jerusalem as Israel’s capital and his proclamation recognizing Israel's authority over the long-disputed Syrian Golan Heights.

He further warned of the simmering crackdowns perpetrated by the US administration against the Palestinians, including cutting aids to the United Nations Relief and Works Agency for Palestine Refugees in the Near East (UNRWA).

Kasem reminded the audience of the disastrous repercussions of the “deal of the century” and the Jewish Nation State Law, which he said are two sides of the same coin.

Kasem further lashed out at a number of Arab governments for normalizing ties with the Israeli occupation, which he said are signs of intolerable apathy.

Head of the National Council of the Moroccan Justice and Development Party, Dr. Idriss Idrissi, said his country will forever stand by the Palestinians and speak up for their legitimate cause and non-negotiable rights, most notably the right to return to their homeland and establish an independent Palestinian state with Jerusalem as its eternal capital.

In a televised address to the conference, former Jordanian Prime Minister Taher AlMasri underscored the key role played by the Palestinians in Europe in speaking out against Israeli crimes and impeaching those held accountable over human rights violations against the Palestinians.

Young man Karim Qaddura, Argos’ youth mayor, shed light on the challenges faced by Palestinian youths in the European Continent and called them on to join forces to mobilize further support for the Palestinian cause.

Several renowned figures spoke at the conference and raised alarm bells over the challenges encountered by the Palestinian people and the crimes committed by the Israeli occupation against the Palestinian people. The list of speakers includes Secretary of the Right of Return Committees Esam Farah, President of the African Organization for Agriculture Dr. Abdel-Majid AlZaar, deputy head of the International Organization for the Defense of Engineers and Palestinian Trade Unions Abdel Karim Boujnah, Secretary-General of the Conference of the Palestinians of Europe and the President of the International Association of Palestinian Professional Associations Adel Abdullah, Member of the National Council Salah Salah, Palestinian journalist Tamer AlMeShal, and representative of the Action Group for Palestine south of Sweden Khaled Abu Kharaj.

A series of seminars have also been held as part of the conference about networking and partnership in pro-Palestine activism in Denmark along with the creative and efficient strategies to speak up for the Palestinian cause.

Other seminars are slated to be held as part of the event about Palestinian trade unions, the role played by women in pro-Palestine advocacy, and the most practical mechanisms to promote Palestinians’ human rights.