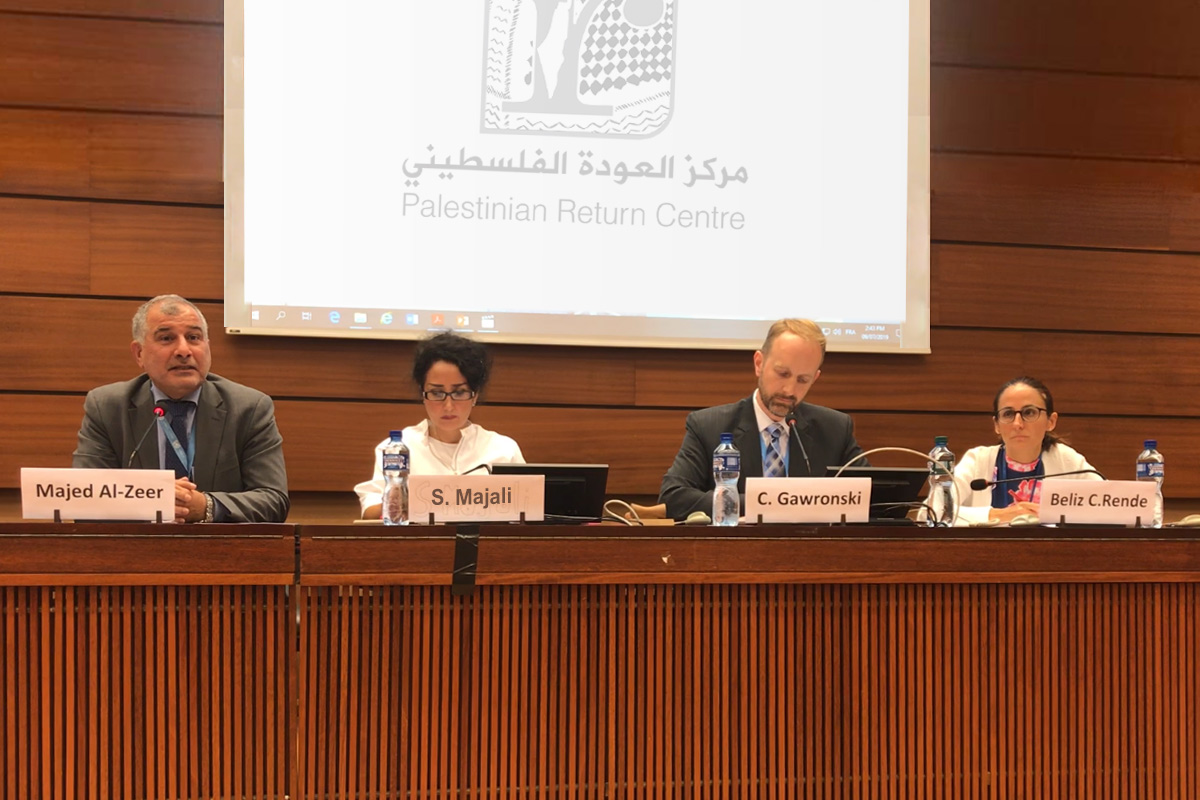 A seminar hosted by the Palestinian Return Centre (PRC) at the UN Human Rights Council (UNHRC) in Geneva gave prominence to the vital role played by the United Nations Relief and Works Agency for Palestine Refugees in the Near East (UNRWA) in its fields of operation and the need to boost funds for the UN Agency.

The seminar, held on Tuesday, at the United Nations Palace in Geneva, on the sidelines of UNHRC’s 41st session, pointed out the key role played by UNRWA for Palestine refugees in light of the ceaseless crackdowns perpetrated by the US and Israel to rescind the Agency’s mandate.

Speakers at the seminar accentuated the need for UNRWA to stretch its fields of operations, enhance its assistance mechanisms, and prop up the refugees’ financial and legal security in the host countries.

The seminar urged the international community and Palestinian leadership to take serious action in response to the US monolithic measures against the refugee agency and speak up against its endeavors to pressurize countries hosting Palestine refugees to take over aid services.

Deputy Permanent Representative of the Permanent Mission of Turkey to the United Nations Beliz Celasin Rende stressed her country’s commitment to support UNRWA as part of Turkey’s chairmanship of the Agency’s Advisory Committee from 1 July 2018 to 30 June 2019.

The Turkish delegate accentuated the need to keep up UNRWA services on the long run, pending a final and just solution to the Palestinian refugee issue, adding that Turkey will do its best to help secure the sustainably of UNRWA’s life-saving operations and uphold stability in the region.

She cited Turkey’s increase of flour aid to UNRWA to 26,000 tons and the rehabilitation of a number of schools and health clinics in one year’s time as good cases in point.

Jordan’s Ambassador Saja AlMajali also pointed out her country’s unyielding commitment to stand by 5.5 million Palestine refugees who have been subjected to serious human rights violations over the decades.

The Jordanian envoy laid emphasis on the vitality of UNRWA’s operations in sustaining peace and stability in the region, saying a string of measures has been opted for by the government of Jordan to help UNRWA recover from the latest financial crunch.

Majali extended her heartfelt thanks to PRC’s team over what she dubbed “an important seminar”.

Speaking at the seminar, PRC’s chairman, Majed Al-Zeer, accentuated the vital role played by UNRWA since its founding in 1949 in providing education and healthcare, among other much-needed services, to millions of Palestine refugees in Jordan, Lebanon, Syria, the Gaza Strip, and the West Bank.

Al-Zeer said survival for most of the refugees, who make up nearly half of the Palestine population, has, to a great extent, hinged on UNRWA.

Al-Zeer sounded the alarm over the US/Israel-backed endeavors to cancel the Agency’s mandate and draw off its resources.

The seminar was moderated by researcher Christopher Gawronski, from the Geneva International Center for Justice. A film about the hurdles faced by UNRWA following the US funding cut was screened at the seminar.

The seminar is the latest in a bundle of events held by PRC as part of the 41st session of the UNHRC in Geneva. Three written reports were submitted to the UN body and four oral statements were delivered by PRC speakers.