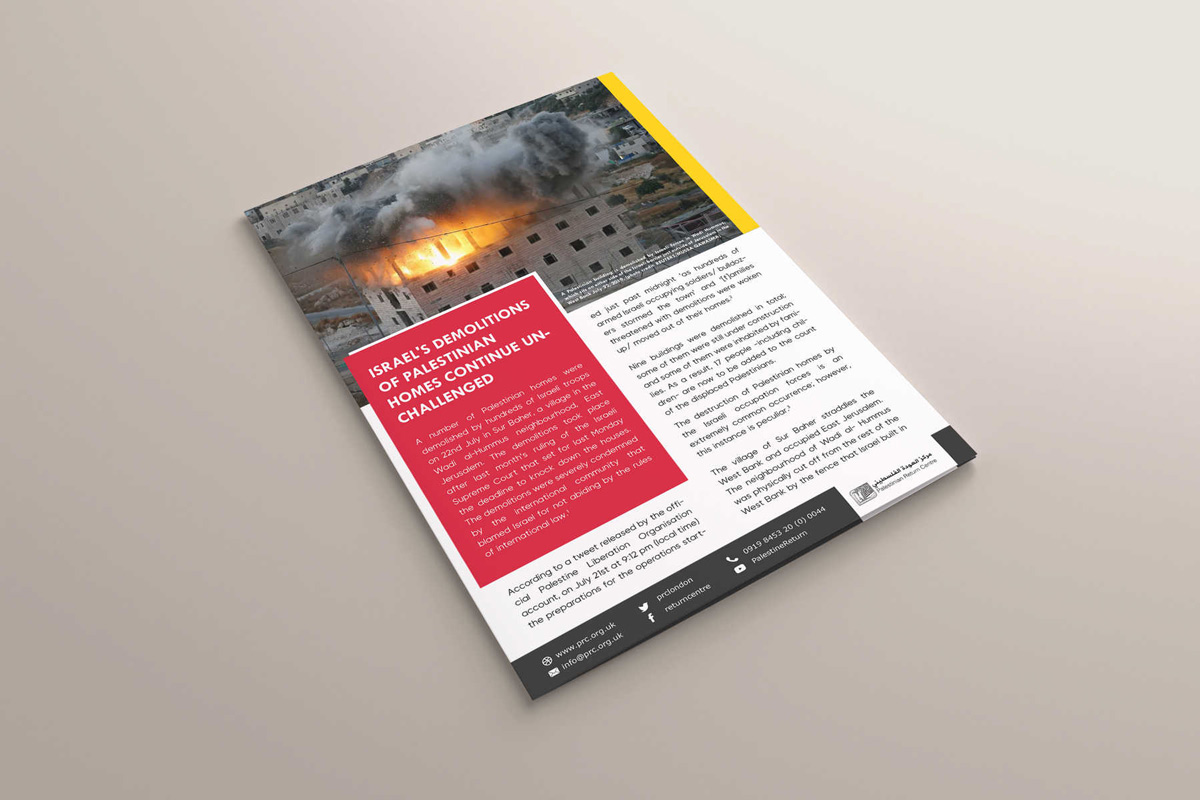 A factsheet issued by the Palestinian Return Centre (PRC) has provided accurate data about Israel’s mass-demolition of Palestinian homes in East Jerusalem on July 22, 2019.

As figures in the fact-based document, a copy of which will be handed over to British MPs and United Nations diplomatic missions in Geneva, the demolitions were carried out after Israel’s Supreme Court, last month, set Monday as the deadline to reduce the targeted structures to rubble.

According to a tweet by the Palestinian Liberation Organization (PLO), preparations started past midnight as hundreds of armed Israeli occupying soldiers and bulldozers rolled into East Jerusalem and embarked on the demolition of nine premises in the villages of Sur Baher and Wadi Hummus. The families threatened with demolitions were woken up and moved out of their homes. At least 17 persons, including children, have gone homeless.

The majority of the structures are located in Areas A and B, which fall under Palestinian civil control, including for planning and building matters, as designated by the Oslo Accords.

Israel’s Separation Wall in Wadi Hummus, which saw the day in 2004-2005, has dismembered Palestinian communities in the area and severed their ties with the occupied West Bank.  But the land on which the apartheid wall was built was never annexed to Jerusalem's municipal territory.

A major concern amongst Palestinian and international activists lies in the fact that the Israeli court verdict sets an alarming precedent for all homes belonging to Palestinian residents that are located in the vicinity of the illegal separation barrier and risk to get knocked down at one fell swoop.

The factsheet points out the international condemnation and universal concern sparked by the mass-demolitions. The United Nations and European Union dubbed the move a flagrant breach of international law and peace treaties and one that strikes at the very foundations of the two-state solution and shrugs off peace prospects.

PRC’s data sheet warned that knocking down nine Palestinian buildings in Sur Baher heralds another episode in the series of Israel’s perpetual violations of human rights, international law, and the international humanitarian law under the security guise.