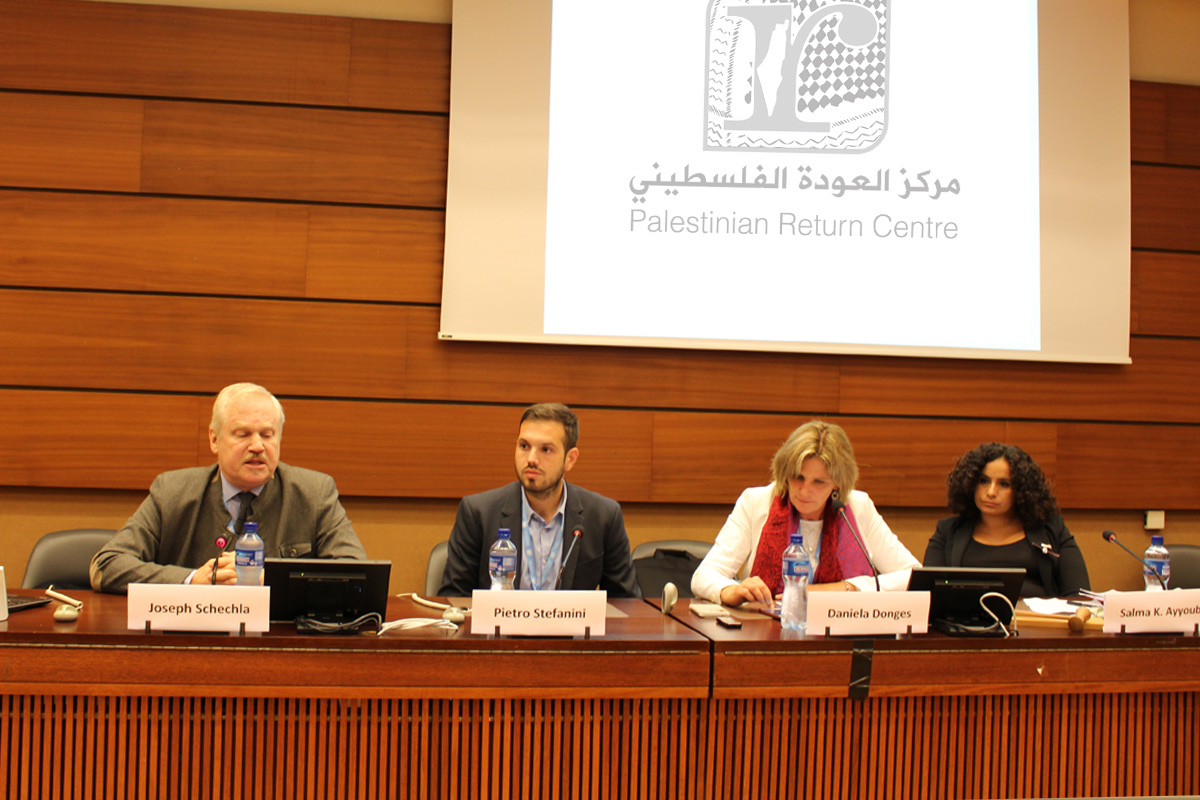 The Palestinian Return Centre held a side event on Wednesday, during the 42th session of the Human Rights Council, on the topic of the accountability for the on-going annexation and colonisation of Palestine.

The speakers, Pietro Stefanini, researcher and advocacy coordinator at the PRC, Salma Karmi-Ayyoubi, British-Palestinian Lawyer, and Joseph Schechla - Coordinator at Housing and Land Rights Network - Habitat International Coalition (HIC-HLRN), shed light on the accountability for the on-going annexation and colonisation of Palestine.

Stefanini condemned the recent raiding of Palestinian NGO Addameer by Israeli occupation forces. He said the Israeli government is targeting the organisations in an attempt to shrink their bases and delegitimize their work and target their funding.

Stefanini said Israeli forces continue to systematically use the excessive force including live ammunition against Palestinian protestors. He added that recommendations by the Commission of Inquiry unfortunately did not prevent the Israeli Occupation Forces from continuing the lethal force against peaceful protest in Gaza.

Stefanini argued to support AMNESTY international call on governments worldwide to impose a comprehensive arms embargo on Israel, following the Israeli disproportion response to the mass demonstration. He stated that many states that continue to engage in arm trade with Israel to oppress peaceful protestors, makes them complicit in Human rights Violations.

Joseph Schechla - Coordinator at Housing and Land Rights Network - Habitat International Coalition (HIC-HLRN). In his intervention, he explained that there is a long and systematic and intended process of establishing institutions by the Israeli authorities that are charted to discriminate in favour of one population at the expense of the indigenous people.

Schechla called to ensure accountability for these illegal accusations as these organisations operate behind the law but operate on behalf of the state of Israel.

Salma Karmi-Ayyoubi warned from the negative consequences of not releasing the database. Ayyoubi said that not publishing the database would discourage the transparency and the attempt to seek the accountability and justice. She added that the impunity is one of the drivers of the Israel-Palestine conflict, the more is done to encourage the impunity, the more violations committed by the Israeli authority and the more the conflict is maintained.

The side event comes in line with a number of other side events held by organizations advocating for Palestinians rights, in the light of the Human Rights Council session.