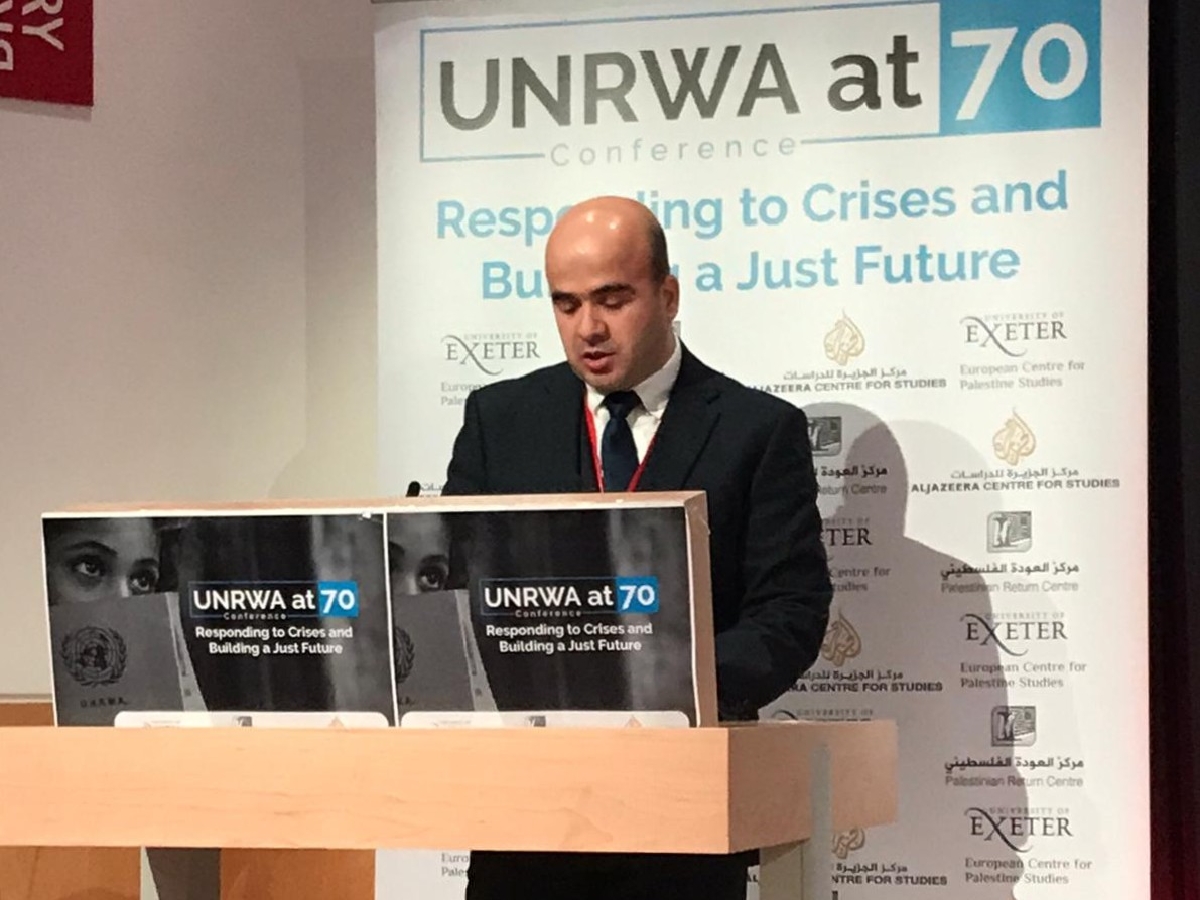 Director-General of the Palestinian Return Centre (PRC), Mr. Tarek Hamoud, delivered the opening address of an academic conference on UNRWA, which has just been launched by PRC, in partnership with AlJazeera Center for Studies and the University of Exeter.

As he harked back to his childhood days, Hammoud expressed his honor to address the audience as “a refugee who knows how it feels like to grow up in refugee camps, torn away from the nourishment of home and warmth of family”.

“UNRWA is a stark reminder of my childhood memories. My body stills carry the traces of a vaccination shot injected by an UNRWA nurse”, he said.

Hammoud underscored the importance of UNRWA as an institution that has shaped Palestinians’ awareness of their refugee status, saying the Agency “will forever remain an international witness of the sufferings of Palestinian refugees, of the nature of our identity, and of our refugee status which will only change when our right of return materializes on the ground”.

PRC’s Director-General hailed the 170 Member States who voted this month in favor of a resolution to renew the Agency’s term of office for another three years, despite the ad hominem campaigns waged by the US and Israel to rescind the agency’s mandate.

“This vote is an unequivocal rejection of a ferocious campaign to wipe out UNRWA’s presence and revoke the inalienable rights of Palestine refugees, most notably the right of return”, he stated.

Hammoud drew attention to the internationally-recognized nature of the Right of Return, which achieved customary status in 1948 when the UN General Assembly passed Resolution 194(III) affirming the rights of Palestinian refugees to return to their homes and to obtain restitution and compensation.

He announced PRC’s intent to launch an international campaign to garner signatures from Palestinian refugees expressing firm rejection of all attempts to negate Palestinians’ inalienable right of return.

“With over 7 million refugees scattered across the globe, the international community should step up efforts to preserve vital services by UNRWA”, Hammoud’s inaugurating speech read. “Until Palestinians’ dream to return to their homeland comes true, Palestine refugees will continue to face substantial challenges to the full enjoyment of their rights.”

As part of the inaugurating session the conference, renowned academic Arafat Madi, from AlJazeera Center for Studies, underscored the dangerous challenges faced by UNRWA and Palestine refugees.

Madi said that the Palestinians issue is still within the most important issues in the Middle East, in light of the US President Donald Trump’s pro-Israel policy and biased positions regarding the conflict.

AlJazeera representative said that recent US decisions concerning UNRWA, Jerusalem, the Golan Heights and most recently Israeli settlements are a reflection of its monolithic and unilateral standpoint regarding the Palestinian issue.

He added that after 70 years since UNRWA was mandated by the UN to assist Palestine refugees the crisis has not been solved and the future and rights of refugees remain endangered.

“UNRWA is facing more and more challenges from Israel and lately from the United States to curtail its work or dismantle it all together”, warned Madi.

The scholar underlined the importance of this conference, which he said is a great opportunity to have a new look at UNRWA’s work after 70 years, to shed light on the challenges it faces, the pitfalls it had, the resources it needs, and the role UNRWA can play to secure a better future for Palestinian refugees.

Short Link : http://bit.ly/33yp0TN
Tags
Next Article
The second session of the conference tackled the relationship between UNRWA and Palestinian refugees
Previous Article
International Conference on UNRWA Kick-Started in London
Most Views
Related Posts