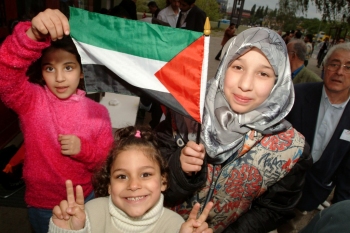 Marking the first anniversary of Israeli onslaught on Gaza

Other speakers from the participating organizations.

Short videos will be screened.

2- Thursday, 14th January: Launch of the biggest parliamentarian delegation to Gaza. On same day a movie will be screened, "To Shoot an Elephant", at Goldsmith University. No specific place for event yet.

3-Thursday, 14th January: Film screening at Goldsmith University, student Union from 3PM to 5 PM. "Unseen Gaza" or "101" will be screened.

4-Saturday, 16th January: Amass visual protest/stunt, where Some hundred activists will play dead' for a few minutes in remembrance of civilians killed in Gaza by Israel.From 1-30 to 2:00 PM

5-Sunday, 17th January: 1 PM to 5 PM speakers will deliver speeches in English, Arabic, French and other languages. There will also be a gallery at Hyde Park, Speaker Corner.

6-Other events will be conducted by Sussex, Glasgow, Brighton andManchester universities. Visit our website for the details later thisweek.

7- Dozens Of other events and actions will be carried out by General Secretariat of Palestinian in Europe Conference. The events will commemorate the 1st anniversary of Gaza war as well as all Palestinianvictims. Visit our website for the details later this week.

Open to all and admission is free. Other actions within the week can be found on our website.