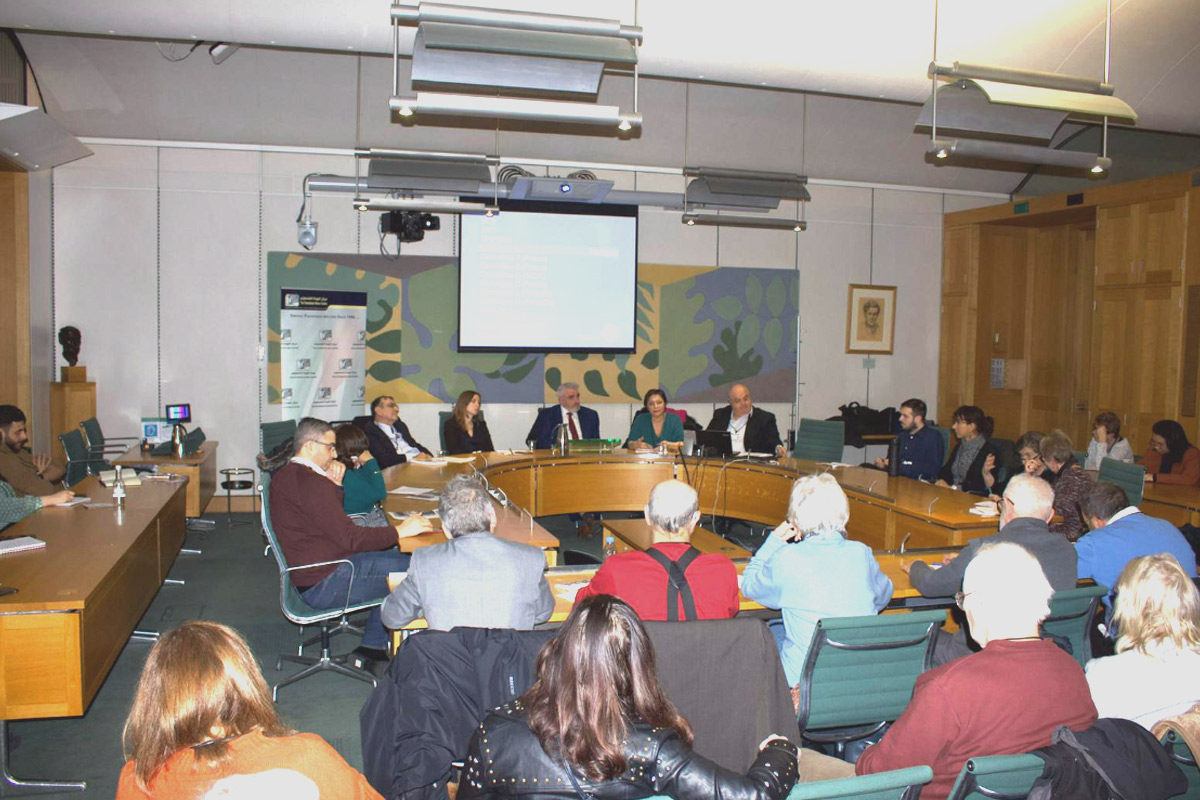 On Wednesday 26 February 2020, from 6pm to 7.30pm, in the Grimond Room of the House of Commons, Tommy Sheppard MP hosted an event on behalf of the Palestinian Return Centre (PRC) to discuss the US ‘Peace Plan’ and its impact on Palestinian refugees.

Speakers covered numerous themes regarding the US so-called ‘Deal of the Century’ and its negative repercussions for Palestinians inside Israel/Palestine and for refugees in the region.

Tommy Sheppard MP, chaired the meeting and provided some introductory remarks, reaffirming the fact that the right of return remains unaddressed in the US plan and therefore there needs to be further work made towards addressing this fundamental right for Palestinians.

The first speaker was Dr. Anne Irfan, Departmental Lecturer in Forced Migration at the Refugee Studies Centre, University of Oxford. She discussed strategic aims of the Trump plan and what it means for Palestinian refugees and UNRWA.

Second speaker Dr. Nadia Nasser-Najjab, Research Fellow in Palestine Studies at the University of Exeter. In her discussion she answered the following question: Why Palestinians should not engage with ‘Peace to Prosperity Plan’?  She provided an incisive analysis of the ‘Peace’ proposal highlighting the way the text treats Palestinians from a colonial mind-set, and does not recognise their humanity but rather sees them as ‘savages’. She argues the plan also completely absolves Israel from any responsibility.

Third speaker was Professor Kamel Hawwash, Chair of the Palestine Solidarity Campaign (PSC). His talk was titled ‘From Return to Peace: Why the solidarity movement will continue to put the right of return front and centre of campaigning for Palestinian rights.’

Last speaker was Professor Nur Masalha, Palestinian historian and formerly Director of the Centre for Religion and History at St. Mary's University, Twickenham; currently associated with SOAS, University of London. In his talk Professor Masalha suggested that all these new recent proposals, and already implemented policies, show a radical departure from past US positions. While the US has always supported Israel, recent moves such as the recognition of Jerusalem as Israel capital, the recognition of the occupied Syrian Golan Heights as part of Israel, the defunding of UNRWA and the green lighting of de-jure annexation of parts of the West Bank are all very dangerous for Palestinians on the ground.

In the final remarks Tommy Sheppard MP, noted the important re-convening of the All Party Parliamentary group on Palestine and looks forward towards a cross-party effort on supporting Palestinian rights. He also reaffirmed his ongoing call for the UK government to recognise Palestine as state.