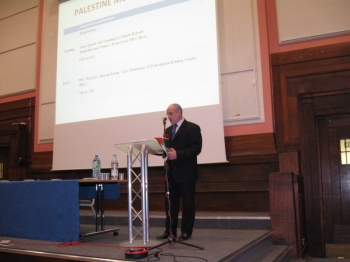 For the first time, a week of wide ranging activities and events was launched yesterday, Wednesday 13th , to mark six decades of suffering and persecution experienced by the Palestinian people . The events are expected to spread all across Europe especially the UK. During the week, the biggest parliamentarian delegation (55 MPs & MEPs) are leaving for Gaza where an assessment of the disastrous humanitarian conditions will be made.

Events continued in the evening where a key conference to remember the Palestinian victims over the past 60 years especially those who were killed in Gaza, was organized in Central London. Although, the weather was cold and snowy, a considerable number of participants totaling a few hundred took part.

Jeremy Corbyn MP and Baroness Jenny Tonge spoke on the calamites and extreme distress experienced in the Gaza strip. They criticized Israel for its cruel policy against the Palestinian civilians. Additionally, both speakers spoke about their experience while visiting Gaza in recent months as well their plans for the next delegation heading for Gaza where they too will take part.

A detailed presentation on the conditions in Gaza by Middle East Expert Peter Eyre will highlighted the violations committed by Israel. His presentation graphically documented the theft of off shore gas by Israel and other western companies. It provided another dimension to Israel's illegal siege and high militarization of the region and to the control and ownership of strategic offshore gas reserves which under international law belongs to the Palestinians.

Ken Loach, famous British Film Director who has many extensive and fascinating cinema productions like Poor Cow, Family Life, Looking for Eric, It's a Free World..., Tickets and many more, expressed his solidarity with the Palestinians people and emphasized the role of the Media and how it should be more fair in its coverage.

Meanwhile, Masod Shaijra, head of Islamic Human Rights Commission, spoke about Israeli media in the UK and how they were collecting donations for Israeli army which was killing Palestinian in time of the one-sided Israeli war. Whilst Frank Barat, Russell Tribunal Palestine coordinator in London spoke about many progressive steps taken towards prosecuting Israeli war criminals.

Obada Swalha and Syef Al Dein Ferjani, representing Palestine Forum in Britain and Muslim Association of Britian; reminded the participants about the Gaza war. They called on the British government and indicated to its responsibilities towards justice for Palestinians.

A witness from Gaza, Ewa Jasiewicz, and Free Gaza Coordinator, who worked and lived in Gaza during the onslaught and siege on Gaza, gave a presentation about the paramedics and the attacks they have encountered from the Israeli army.