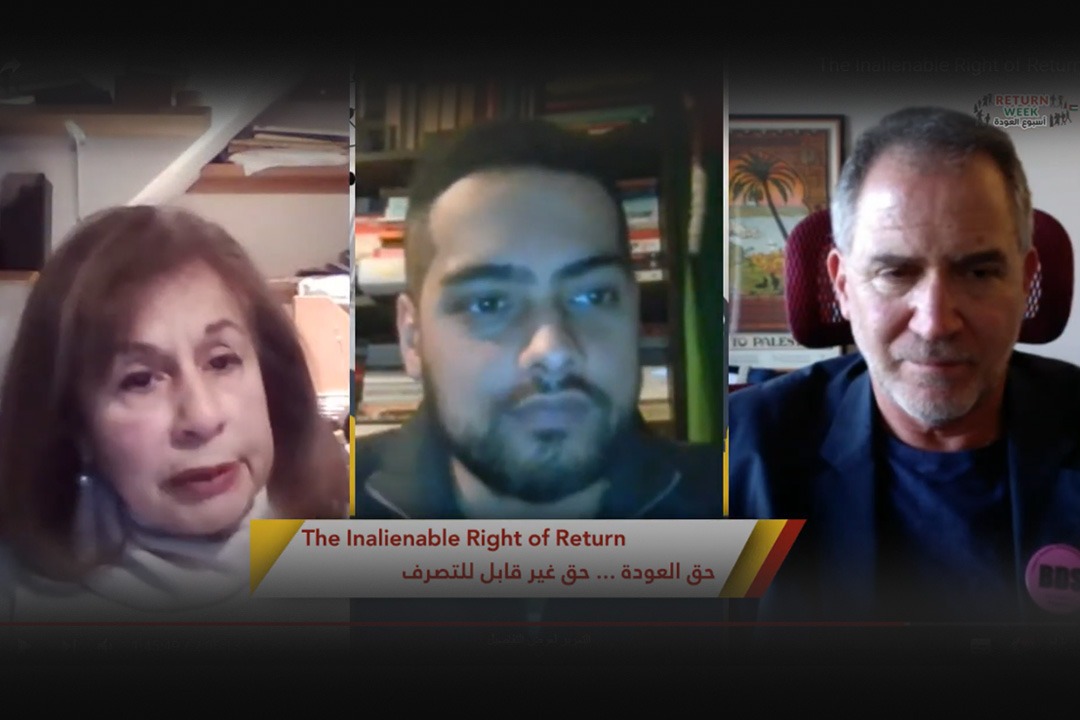 Onboard was attorney and human rights activist Noura Erakat. She is an assistant professor at Rutgers University. She has served as legal counsel to the U.S. House of Representatives and as a legal advocate for Palestinian refugee rights at the United Nations. Noura is the author of ‘Justice for Some: Law and the Question of Palestine’, winner of the 2019 Palestine Book Awards sponsored by the Middle East Monitor.

The prominent US-based academic said Palestinian refugees’ struggle to return to their homeland is a reminder of the humanitarian universal, and legal struggle for the right to live freely and independently on one’s motherland.

Erekat opened her contribution by expressing her pride of being part of international efforts promoting Palestinian refugees’ right of return to their homeland.

Palestine lives in us “through a memory or a memory of our grandparents” which is “one of the things which defines us”, she said.

Erekat harked back to the British Mandate of Palestine and the Balfour Declaration of 1917, which sought to establish a Jewsih national home without regard for the native Palestinian population and their right to self-determination.

She said “one act of pen”, in reference to Balfour declaration, was tantamount to erasing the Palestinian population, which it referred to as “the non-jewish population”.

The prominent pro-Palestine activist discussed the “colonial erasure” enshrined in the British mandate and the Zionist project, which aimed to displace the Palestinians in order to establish a Jewish demographic majority of 80%.

“Coexistence was not possible in the Zionist vision”, she stated. “From the beginning, the Palestinians were removed intentionally under the pretext of defensive force”.

At the same time, Erekat said the plight of Palestinian refugees is not just humanitarian but is political at heart, as the refugees need not only food, clothing, and shelter, but also need to retrieve their human rights, including the right to establish an independent state and to exercise their personal freedoms guaranteed by international law and relevant UN resolutions.

The speaker underscored the battle waged against the UN Palestine Refugee Agency (UNRWA) and the defunding crisis faced by the Agency, which she said makes part of Israeli attempts to negate the status of Palestinian refugees.

“If UNRWA goes away, so would Palestinian refugees go away”, she stated.

“I want to emphasize that the return of refugees should mark the beginning of our liberation struggle and not the end of it”, she stated as she closed her speech. “We’re not alone. As we struggle for our ourselves, we are also  struggling for a future that is better for everyone”.

Iman Jodeh also spoke as part of the opening panel. She is the Representative-Elect for House District 41 in Aurora, Colorado. She is a first generation American, born to Palestinian immigrants and refugees, and the first Muslim and Arab woman elected to the Colorado State Legislature. Iman is the Founder and Executive Director of the locally based non-profit “Meet the Middle East” (MTME), which fosters relationships between the US and the Middle East through education and immersion travel. Iman lectured at the University of Denver’s University College Enrichment Program and taught “The Israeli Palestinian Conflict: From Ancient History to Today’s Headlines”, as well as “Life Under Occupation: A Palestinian Perspective, and Islam 101”.

Jodeh underscored the discriminatory practices pursued by the Israeli occupation authorities against the Palestinians since the Nakba (catastrophe) of 1948 to the present day.

She said Palestinian refugees and their descendents are aware of the tragedy that has befallen them as a result of Israel’s displacement and ethnic cleansing plans, saying this policy only makes them more committed to their right of return to their motherland.

Jodeh said that she often speaks up for human rights abuses, arrests, and crackdowns perpetrated by the Israeli occupation authorities against the Palestinians and the obstacles set by Israel to prevent refugees from visiting their native towns and villages.

Appearing onboard was also Janna Jihad, an activist known for being the world’s youngest journalist. A resident of the village of Nabi Saleh in the occupied West Bank, Janna regularly participates in demonstrations against the Israeli occupation. She began making videos of what was happening in her village when she was only seven.

Janna Jihad said the Palestinian refugee plight and the right of return should be placed on top of Palestinians’ primary causes and resistance agenda.

She narrated the story of Palestinian forebears who suffered displacement and deportation after they were forced by Zionist gangs out of their towns and villages, where they had long lived in peace and serenity.

She referred to her ongoing efforts to raise fourth generation refugees’ awareness about their ties to their homeland and the agony suffered by their grandparents who had their homes destroyed and reduced to rubble by Israeli invaders in the West Bank and Jerusalem.

The next speaker was Miko Peled, a writer and human rights activist born and raised in Jerusalem. He is considered by many to be one of the clearest voices calling for justice in Palestine and the creation of a single democracy with equal rights on all of historic Palestine. He is the author of “The General’s Son, Journey of an Israeli in Palestine," and “Injustice, The Story of The Holy Land Foundation Five”.

Peled acclaimed PRC’s efforts in promoting the refugees’ right of return, a right that has been constantly negated and targeted by Israel.

He said the refugee plight dates back to 1948 when Zionist militias removed the Palestinians from their land and homes. Today Israel continues to grab houses, seize lands, and confiscate property inside historical Palestine, which the Israelis claim was “an abandoned area”.

He stressed Palestinians’ inalienable right to return to Palestine and receive compensations as per international law and UN resolutions.

Dr. Ghada Karmi also delivered an enlightening contribution. She is a Palestinian doctor, academic and author. She writes frequently on Palestinian issues in The Guardian, The Nation and Journal of Palestine Studies. She is a fellow and lecturer at the Institute of Arab & Islamic studies at the University of Exeter. Her many publications include her acclaimed memoir, In Search of Fatima, chronicling her family's expulsion from Palestine to Britain in 1948.

She tacked the history of UNRWA and the historical motives behind its establishment in 1948 as a UN Agency that stands witness to the Palestinian refugee plight.

She said the Palestinians need to find ways to make their right of return come true. According to her, the first step is to be made by people living under the Israeli Apartheid regime through continuous struggle in order to put an end to the Israeli occupation. The next step is to have an independent state established.

Rashid Khalidi also appeared onboard. He is Edward Said Professor of Modern Arab Studies at Columbia University. He received a B.A. from Yale University in 1970 and a D.Phil. from Oxford University in 1974, and has taught at the American University of Beirut and the University of Chicago. He is co-editor of the Journal of Palestine Studies. He served as an advisor to the Palestinian delegation to the Madrid and Washington Arab-Israeli peace negotiations from October 1991 until June 1993. Khalidi is the author of eight books, with his most recent book being ‘The Hundred Years’ War on Palestine: Settler-Colonial Conquest and Resistance, 1917-2017’ (2020).

Khalidi referred to UN Resolution 194 (III), resolving that “refugees wishing to return to their homes and live at peace with their neighbours should be permitted to do so at the earliest practicable date, and that compensation should be paid for the property of those choosing not to return and for loss of or damage to property which, under principles of international law or equity, should be made good by the Governments or authorities responsible.”

He called for a just and lasting solution to the Palestinian refugee issue and for pressurizing the international community to recognize such an inalienable right and urge Israel to comply with international resolutions in this regard.