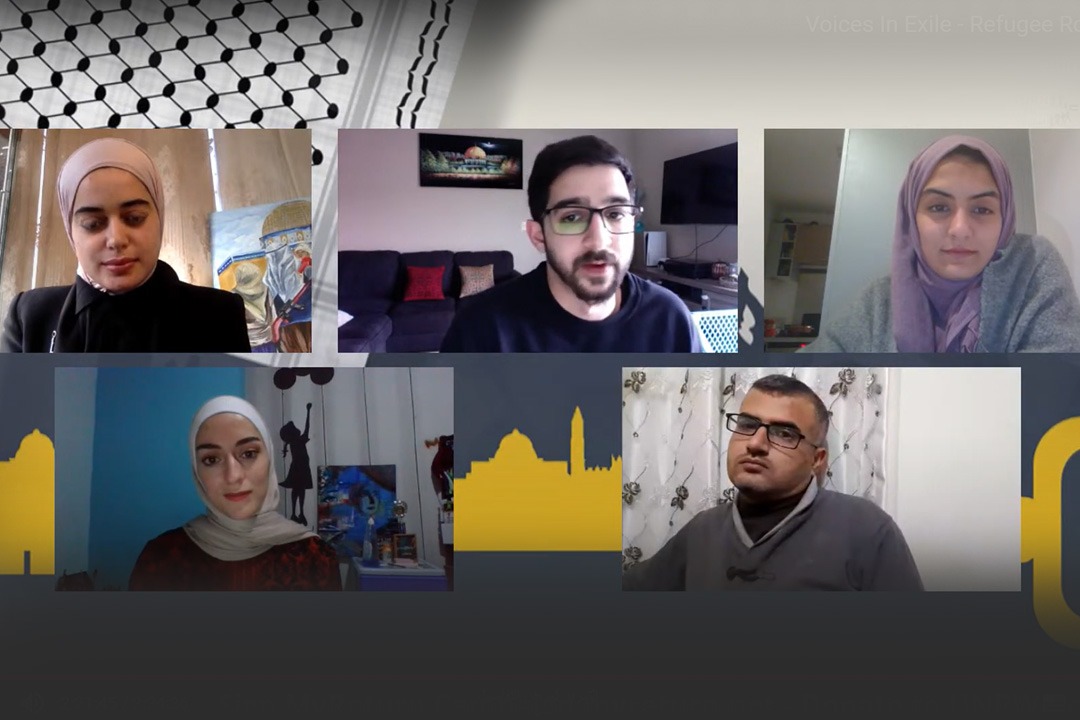 On the second webinar of the “Return Week”, held on Tuesday at 06 p.m GPT, PRC gave the floor to Palestinian activists and refugees who have faced mountainous journeys trying to overcome the trauma inflicted by years of displacement, homelessness, and search for citizenship.

The panel was chaired by Nader Hammoud, the founder of “Palestine in America” blog.

On the panel was Hanan Al Hroub, a Palestinian instructor who received her Global Teacher Prize award from Sunny Varkey of the Varkey Foundation. Hanan grew up in the Palestinian refugee camp, Bethlehem, where she was regularly exposed to acts of violence. She went into primary education after her children were left deeply traumatised by a shooting incident they witnessed on their way home from school. Her experiences in meetings and consultations to discuss her children’s behaviour, development and academic performance in the years that followed led Hanan to try to help others who, having grown up in similar circumstances, require special handling at school.

Hanan said the Palestinians are the only people who have managed to turn their suffering into a space of hope and creativity.

She gave instances on how the Israeli occupation authorities frequently shut down Palestinian schools. “The occupation can destroy our homes, uproot our trees; but never ever shall it take away our dreams”.

She said there could be no peace in the world as long as the Palestinians are deprived of the right to live in peace and serenity on the land of their forebears.

The next speaker was Amina AlAshkar, a Palestinian refugee and journalist living in Lebanon.

Amina spoke about the tragedy of Palestinians living in refugee camps in Lebanon, where they have been denied their basic human rights, including access to the labor market.

Harking back to her father’s story, she said her father was forced to work under dire humanitarian conditions for over 15 hours every single day to provide for his family and secure Amina’s education fees until she managed to learn English and pursue her MA studies in the U.K.

She said Palestinian refugees continue to face discriminatory pressure. In refugee camps they continue to suffer a sense of dis-belonging and loss.

In her terms, the only solution to the refugee plight is to secure the refugees’ right to return to their homeland and end Israel’s occupation of Palestine.

The third speaker—Osama Shahin, a Palestinian refugee from Syria and an engineer working in the U.K—said his story has been one of endless suffering.

He said it is painful that Palestinian refugees are considered as “second-class citizens”. His family was subjected to a two-fold displacement, one in 1948, when the Zionist gangs forced his grandparents out of their lands; the second in 2011, following the outburst of the bloody Syrian conflict.

Osama returned to the moments when he was denied entry into two Arab Gulf countries due to his refugee status.

Asala said the Israeli occupation has failed to take away Palestinian refugees’ right of return despite its ceaseless attempts to negate this right and displace the Palestinians from their homeland.

She said Palestine lives in her heart and soul, though she has been living thousands of miles away from the land of her grandparents.

“Palestine was and still is my reason for living”, said Asala, who visited Palestine more than once and witnessed, with her own eyes, Israel’s crackdowns and discriminatory practices at security checkpoints.

For her part, Lorena Mussa, the President of the General Union of Palestinian Students of Chile, said as a member of the Palestinian community, which makes up a minority group in Chile, she cannot forget about her right to return to her native land from which her parents were forced out following the Nakba of 1948.

Lorena accused the Israeli government of pursuing preplanned human rights abuses against the Palestinians, saying she attempted to visit Palestine more than once but Israel keeps denying her this right.

She said the Palestinians will not bear remaining in exile for their whole lifetime, adding that the key solution to the issue is to have the refugees’ right of return materialize on the ground.

Ahmed Abu Artema, a Palestinian writer and activist and the founder of 'The Great March of Return' in Gaza, also spoke about the suffering of Palestinian refugees in Gaza due to the 12-year Israeli blockade.

He said the Great Return March held on the Gaza border, and which coincided with Donald Trump’s tension-rousing declaration that Jerusalem is Israel’s capital, was a proof that the Palestinians will never forfeit their right of return.

At the same time, Anas Radhi, from the Palestinian Youth Foundation in Britain – Olive, stressed the need to raise the younger generations’ awareness about their ties to Palestine.

He said Palestine is a fair cause, urging the youth and the international community to advocate a just and lasting solution to the Palestinian refugee plight.

She said the right of return is paramount and it is so painful that first-generation refugees are dying outside their native land.