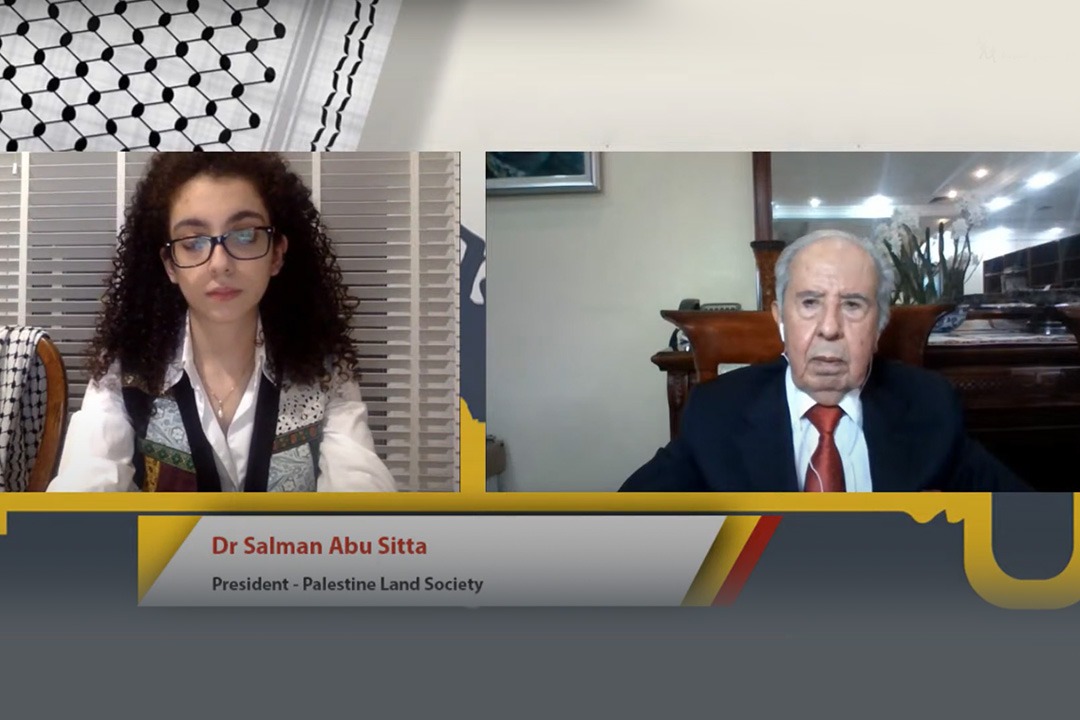 On the fourth day of the “Return Week” prominent Palestinian historian Salman Abu Sitta provided a “practicable” roadmap to make Palestinians’ right to return to their homes and villages, from which they were displaced by Zionist gangs in 1948, come true.

Speaking as part of a webinar chaired by member of the Students for Palestine Union in Britain, Silin Salah, Abu Sitta said the right of return is the only key to achieving peace and stability in the area.

Harking back to the Nakba of 1948, Abu Sitta referred to assaults launched by Zionist militias against over 560 Palestinian towns and villages.

He said the refugee plight dates back to the Nakba days. Currently, over 7 million Palestinian refugee scattered across the globe are enduring the tragedy that has befallen as a result of the Israeli colonial project.

He said 165 crimes were committed by Israel’s Haganah militia against the native Palestinian inhabitants to give way for the establishment of present-day Israel.

In Abu Sitta’s terms, the Nakba is “an unprecedented historical crime” that was perpetrated under a cover from the British Mandate, the United Nations, and the world’s super powers just eight months after the Second World War.

He enumerated 11 types of wars waged by the Israeli occupation against Palestinian civilians. The list includes land grab by force, silencing the victims, altering the demographic character of Palestine, erasing names of Palestinian towns and villages, reversing historical narratives, attacking archeological and holy sites, and cracking down on Palestinians’ personal freedoms.

He said one of the most brutal wars waged by Israel lies in its attacks against protesters and turn them into disabled persons so as to kill their dream for a better life.

He said the Palestinians should remember that the right of return is sacred, guaranteed by international laws most notably UN Resolution 194, and legal.

He displayed a roadmap showing practical ways to turn the right of return exercisable and practicable.

He called on Palestinian youth to stand up for their right of return and to never throw in the towel, saying the number of Palestinians around the world will go up from 13 million to 18 million in 2030, including 9 million on the Palestinian territories.

He said the Palestinians do not have military force but are self-determined and strong-willed enough to keep up their national liberation struggle.

Salman Abu Sitta is a Palestinian researcher most known for his ground-breaking project mapping of Palestine in 21st, 20th and 19th centuries and developing a practical plan for implementing the Palestinian right of return of Palestinian refugees.

Abu Sitta was born in 1937 into a Palestinian family with a long tradition of fierce resistance to occupiers of their land. Since 1922, the land had been under the jurisdiction of the British, under the provision of the British Mandate for Palestine. Prior to this, the Ottomans had ruled the region for four hundred years. Abu Sitta's family's land and the village bore their name, Ma'in Abu Sitta (the Abu Sitta springwell), in Beer Sheba District of Palestine.

Abu Sitta has spent 40 years digging for any detail of information about or related to Palestine before, during and after al Nakba. Abu Sitta's work has encompassed not only documenting the Nakba in which an estimated 6-800,000 Palestinians were displaced in 1948, but also ensuring that "the memories and identity of the occupied homeland are never lost". He is regarded by Uri Avnery as perhaps 'the world's foremost expert on the Nakba'. The documentation process began when he was 22 years old, when he was studying in England.

"It sort of started from there, and it has never stopped," Abu Sitta says. "I kept collecting all and any material on every inch of my homeland."

Abu Sitta's work was to show that the return of the refugees to their homes is not only sacred to Palestinians, legal under international law but also feasible and possible without major dislocation to the existing Jewish settlers in Palestine. His work also includes the compendium "Atlas of Palestine 1917- 1966", (Palestine Land Society, London 2010, ISBN 978-0-9549034-2-8) and Arabi edition in 2012, also the Atlas of Palestine 1871-1877, London 2020 depicting Arab Palestine before Zionists colonization. Additionally the Return Journey Atlas (2006) which shows the depopulated Palestinian village lands the Zionist colonies which occupies them today.