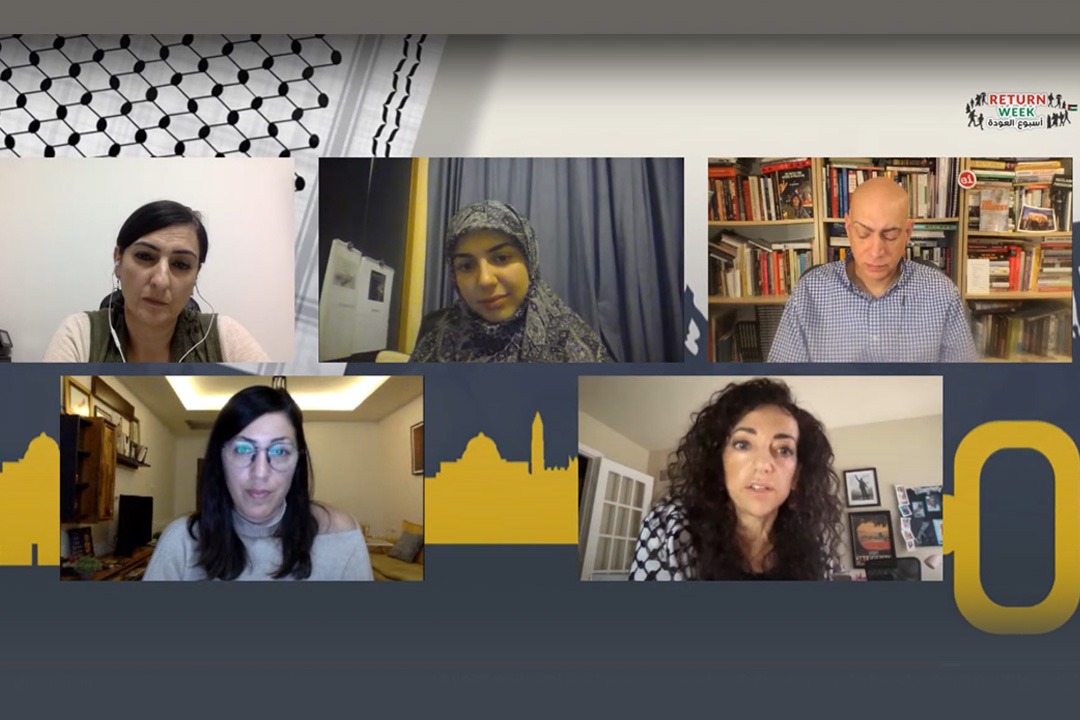 On the fifth and last day of the “Return Week”, prominent academics, activists, and legal experts provided forward-looking perspectives on the Palestinian liberation struggle and the right of return.

In  a session entitled ‘The Right of Return: 72 Years of Waiting’ and chaired by activist Batool Subeiti, the first speaker—Lubnah Shomali, from Badil human rights organization—said the Palestinian Nakba extends well beyond the period from 1947 to 1949. The mass exodus began during the British Mandate of Palestine.

In a series of maps she presented during the webinar, Shomali underscored the tragedy that has befallen the Palestinians due to mass displacement, land and property confiscation, and apartheid policies.

She said there are currently about 8.7 million Palestinian refugees and displaced persons. 66% of Palestinians were displaced at least once in their lifetime.

Najwan Berekdar, from ZOCHROT, also appeared onboard. ZOCHROT is an NGO working since 2002 to promote acknowledgement and accountability for the ongoing injustices of the Nakba, the Palestinian catastrophe of 1948 and the reconceptualization of the Return as the imperative redress of the Nakba and a chance for a better life for all the country's inhabitants.

She said that like many others, she feels that she is a refugee due to the racist Israeli policies perpetrated in Palestinian territories occupied since 1948 (present-day Israel).

Berekdar emphasized that the right of return is not just exclusive to Palestinians living abroad or the blockaded Gaza Strip or the West Bank; it’s also about those who seek to retrieve their own place on their native land and villages.

For his part, Dr. Ramzy Barood, an author, a syndicated columnist, editor of Palestine Chronicle and a Senior Research Fellow at Center for Islam and Global Affairs (CIGA), underscored the political hurdles preventing the translation of UN resolutions into action.

He said it is high time the international community corrected the traditional understanding that a refugee only needs food and relief items. He said being a refugee is much more complicated and deeper because it is about the search for identity.

Barood said the real challenge is to turn the right of return into a political struggle.

At the same time, Palestinian-American lawyer Huwaida Arraf tackled Israel’s racist policies, which had existed long before 1948 in an attempt to displace the native inhabitants and give way for the establishment of colonial settlements.

Arraf said the implementation of international law has always been subject to political decisions, adding that the Palestinians should continue to speak up for their right of return and mobilize the international community to that end.

She said return is the only fair and legitimate solution to the Palestinian refugee plight: “Our dreams and freedoms are stronger than Israel’s weapons”.

Ali Abunimah, founder of the Electronic Intifada website, said as time has passed by, Israel has been striving to implement tactics aiming to turn the world’s attention away from the Nakba and the right of return.

He said the Palestinians are still enduring the repercussions of the Nakba and are being denied their right to self-determination.

Palestinian author and film-director, Farah Nabulsi also shed the light on the early founding stages of the self-proclaimed Israeli state which has seen the day through a policy of ethnic cleansing, land grab, and forced displacement.

She said nearly 750,000 Palestinians were forced out of their homes by Zionist militias during the Nakba of 1948.

In her view, Israel would not have seen the day had the native Palestinian inhabitants not been displaced from their towns and cities.