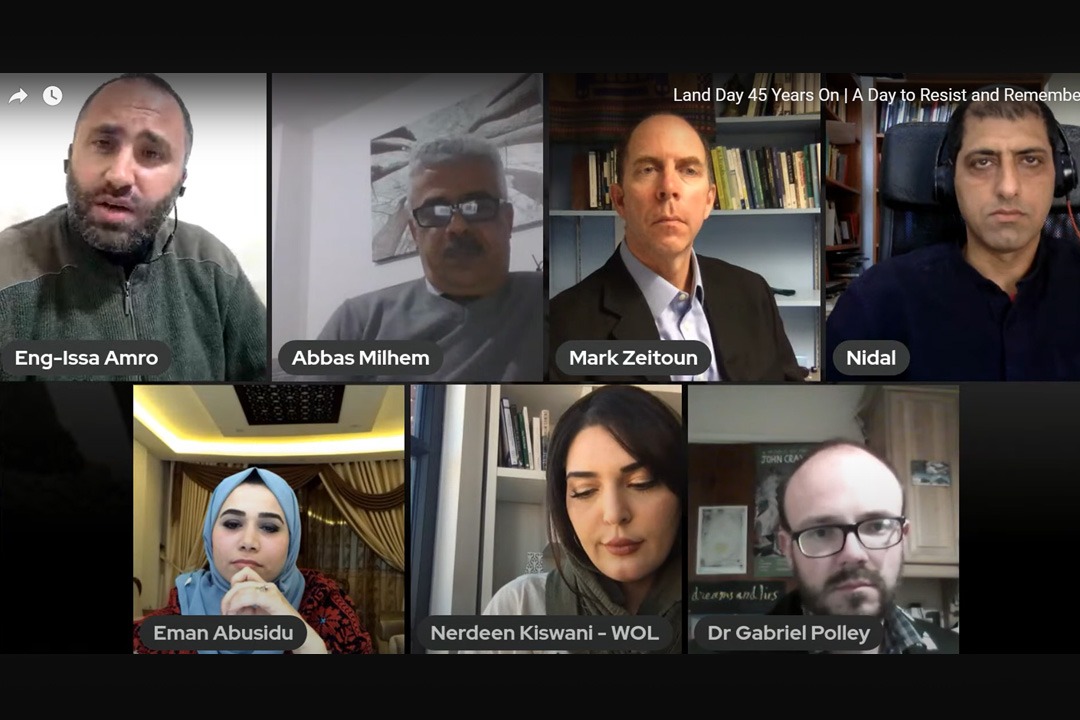 PRC has warned of Israeli plans to hold sway over more Palestinian lands in the occupied West Bank, including east Jerusalem.

This came in a webinar held on the occasion of the 45th anniversary of the Palestinian Land Day, which saw Palestinian communities resisting not only the theft of land but also overall settler colonial policies of ethnic cleansing.

He underscored the illegal practices by the Israeli military and settlers, including demolition of Palestinian homes, assaults against civilians and their property, and the erasure of Palestinian villages and communities.

Issa said the Palestinians continue to grapple with the devastating upshots of Israel’s apartheid regime and discriminatory practices.

Palestinian journalist Imen Abu Sido said the Land Day is  a stark reminder of Israeli attacks on the 1976 mass protests which saw Palestinian communities resisting not only the theft of land but also overall settler colonial policies of ethnic cleansing, resulting in six deaths and hundreds of injuries.

She referred to life testimonies by Palestinians showing their strong commitment to their motherland and their refusal to turn their land into bargaining chips. The affidavits deny claims that the Palestinians have forfeited their land.

Abu Sido called for increasing efforts to speak up against Israeli crimes and human rights violations across online platforms and mass media.

Mark Zeitoun, Professor of Water Security and Policy at the School of International Development, University of East Anglia, the United Kingdom, highlighted Israel’s escalating endeavours to seize water resources across the occupied West Bank in favor of Israeli settlements.

Zeitoun said the Palestinians should leave no stone unturned until the notorious Oslo Accords of 1993 are shattered.

Nidhal AlAzraq, a Palestinian refugee who is currently working as the Executive Director of a US-based organization focusing on water, food and environmental work in refugee camps in the West Bank, referred to the dramatic decrease in groundwater wells in the West Bank since 1967. The situation has gone worse following the construction of the Apartheid wall in 2002.

He said that since 1967 Israel has been ceaselessly targeting Palestinian agricultural lands with abundant natural resources, particularly near the Jordanian borders, while it continues to isolate Palestinian communities and deprive them of 80% of their natural resources.

Executive Director of the Palestinian Farmers Association, Abbas Melhem, said as long as Israel continues to expand its settlements on Palestinian land and steal natural resources, the longest war in history shall never come to end.

Prominent anti-occupation activist in the US Nardine Kiswani said the land is a lifeline for the Palestinian people.

She called for exposing Israel’s discriminatory anti-coronavirus policy, including vaccinations, saying the Palestinians should be able to freely exercise their right to self-determination and return to their homeland sooner or later.

March 30 marks the 45th anniversary of the Palestinian Land Day, on which Israeli police shot and killed six Palestinian citizens of Israel as they were protesting the Israeli government’s expropriation of thousands of donums of Palestinian land.

Annually, on this very special day, Palestinian refugees take to the streets to speak up for their inalienable rights, most notably their right to return to their homeland—Palestine—from which they have been expelled by the Zionist colonial regime.

Back in 1976, Israeli attacks on mass protests which saw Palestinian communities resisting not only the misappropriation of land but also overall settler colonial policies of erasure, resulted in six deaths and hundreds of injuries.