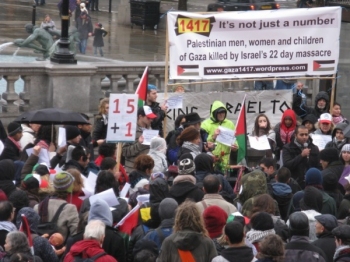 An event was staged at Trafalagar Square to remember the Palestinians murdered by Israel during Operation Cast Lead this time last year. Despite hideous weather, approximately 200 people came out to show their solidarity and were joined by Manal Timraz, Natalie Abou Shakra and Sameh Habeeb all of whom addressed the crowd.

The event marked the anniversary of the atrocities and called for the state of Israel to be brought to justice for its illegal actions and for those responsible to face trial for war crimes. It was organized by a group of activists and in cooperation with the Palestinian Return centre.

Heavy rain meant that instead of staging a "Die-in", with people lying on the ground to represent those killed in the attack, those present decided to observe a minute's silence for the victims. Approximatly 200 people participated with each being given the name of one of the dead to hold aloft. After a perfectly observed silence, three speakers with direct connections to the attack on Gaza addressed the crowd Natalie Abou Shakrah, a Gaza survivor; and Manal Timraz, who lost fifteen members of her family in the attack, eleven of whom were children.

Manal Timraz's speech proved to be one of the most emotional moments of the day. People in the crowd had tears in their eyes as she told the crowd: "When I saw you all holding the names of the victims I was looking around for the names of my family members... the youngest was 2 and the eldest of the children was just twelve. Can you imagine...these are children who were not allowed to grow up."

"But we are not only here to commemorate the dead. We are here to highlight the injustice of Israel's brutal occupation, besiegement and oppression of Gaza and its population. We - civil society - will not accept Israel's crimes and war mongering, and we will not accept our government's continued sponsoring of Israel's terror tactics." One of the event organisers said in speech.

After the speeches, some participants initiated their own die in with some lying on the ground covered in fake blood with others burning the Israeli flag in protest against the Israel state, with many others joining in chanting and calling for Freedom for Palestine.