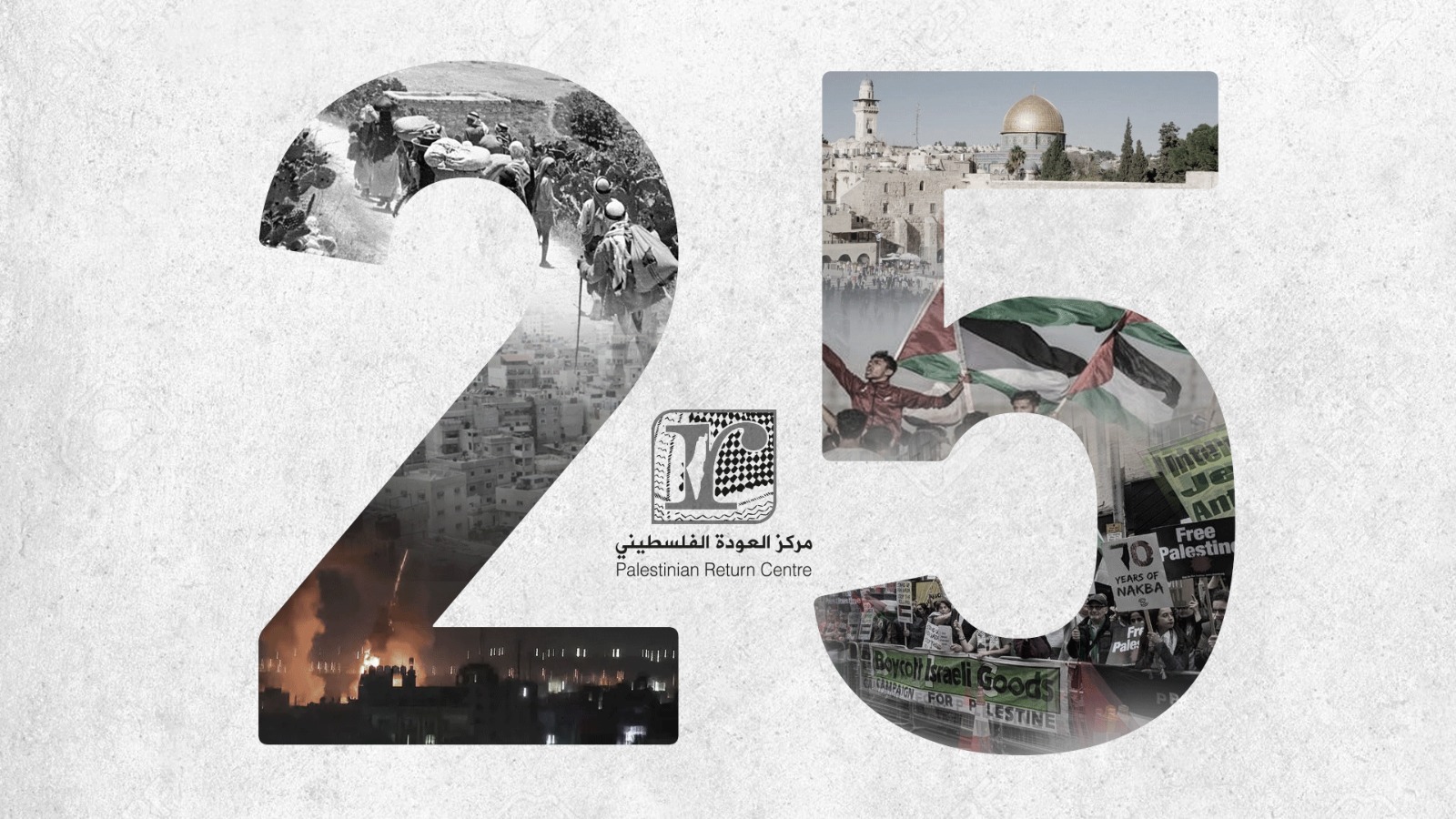 The Palestinian Return Centre (PRC) in London has celebrated on Thursday, June 24, its Silver Jubilee (25 years since its founding).

All the way through the past quarter century, PRC has been widely active in research on and advocacy for the Palestinian refugees’ right of return to their homeland—Palestine—from which they have been expelled by Zionist militias since 1948.

Founded in 1996 in London, PRC has devoted its human rights agenda to the socio-political and historical aspects of the Palestinian Refugee plight.

In July 2015, PRC was given special consultative status at the United Nations as Non-governmental organisation (NGO).

The Palestinian Return Centre frames the problematic situation of the Palestinian Refugees in relation to the “Nakba” or “catastrophe”, as it describes the establishment of the State of Israel in 1948 and the resulting displacement of Palestinians. The issue of the Palestinian refugees’ return to Palestine is at the center of the PRC’s activities both as a humanitarian and political concern.

PRC aims to preserve the Palestinian identity and to resist attempts to resettle the disperse Palestinians in their places of refuge. The PRC coordinates with any individual or group that shares its cause.

Moreover, the organisation endeavours to establish the status of Palestinian refugees under international law without any equivocation, and campaign for their basic human and legal rights.

To the above ends, PRC organises a wide range of events to promote the Palestinian cause both in the United Kingdom and in Europe.

In late 2020, PRC published a book entitled “UNRWA at 70: Palestinian Refugees in Context”. The book grew out of a one-day conference hosted in 2019 at the British Library in London, organised by the Palestinian Return Centre with the collaboration of the Al Jazeera Centre for Studies and the European Centre for Palestine Studies at the University of Exeter.

The list of resources also includes dozens of oral and written statements submitted to the UN Human Rights Council, many of which have been joined to the council’s repertoire of official documents.

One of the most impressive publications by PRC is “The Atlas of Palestine” published in its first edition in 2004. The document was already an essential item in the library of anyone seriously interested in the history of Palestine. At nearly 700 pages (almost 300 more than the earlier edition), the 2010 edition contains valuable information available nowhere else on 1,600 towns and villages, 16,000 landmarks, 30,000 place names, and much more.

The Atlas is the strongest rebuttal yet of the Zionist cartographic representation of the country’s history, exemplified in publications such as Martin Gilbert’s Atlas of the Arab-Israeli Conflict (Oxford University Press, 1993) and the various other atlases produced by Israeli geographers over the years. It challenges those projects both as a meta-narrative of Palestine’s history and as a detailed project that rescues the native population from the invisibility to which they are condemned by Gilbert and others.

At the same time, PRC’s internationally-acclaimed “My Return” campaign continues to garner widespread support across several world countries, with hundreds of thousands of signatures on a petition demanding Palestinians’ right of return to their homeland. Despite the lockdown measures implemented nationally and internationally as part of the anti-coronavirus fight, the campaign continues to exert a pull on human rights advocates and online platforms. The petition has been signed by Palestinian refugees from over 180 countries.

PRC will continue its efforts to speak up for Palestinian refugees and to stand on guard to all attempts to erase the Palestinians from the history of Palestine.