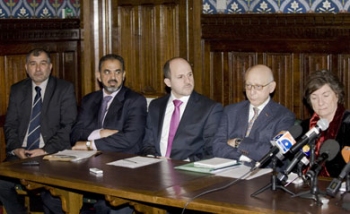 Calling the devastation in the Gaza Strip clear evidence of war crimes, a group of MPs who just returned from the beleaguered territory called for Israeli officials to be held accountable in a post-trip briefing held in the British House of Commons. The MPs travelled to Gaza in a delegation sponsored by the European Campaign to End the Siege of Gaza and supported by Palestinian Return Centre (PRC). The UK is one of a number of countries where private prosecutions can be brought for alleged war crimes committed abroad. However, following an attempt to obtain an arrest warrant for Israeli Foreign Minister Tzipi Livni from a London magistrates' court in December, the UK’s Foreign Office announced it is planning to change the legal process so that the attorney general would first have to approve warrants before suspected war criminals could be arrested. “War criminals must not be allowed to escape accountability under the cover of law, in Great Britain or elsewhere,” said Lord Nazir Ahmed, a member of the House of Lords and the UK’s first Muslim “life peer” (a non-inherited recognition of “nobility” bestowed by the monarch). “They must be punished for their actions – in this case, the devastation of the Gaza Strip, home to nearly 1.5 million people.” The plight of the Palestinian children, which represent 57 percent of the Gazan population, is a particular concern of the delegation. Baroness Jenny Tonge, a former British MP, described the high rate of malnutrition, anemia and psychological distress among the children there. “ Israel has created a new generation of Palestinian children who are damaged,” she observed. “How can peace ever be possible under these conditions? Israel clearly has another future in mind.” MP Martin Linton, who visited Gaza a year ago and again shortly after the Israeli invasion, expressed his shock at the absence of any kind of reconstruction due to the Israeli refusal to allow in any building materials. “Schools still devastated, factories do not work...everything is as it was a year ago, just after the attack.” Sir Gerald Kaufman, a Jewish member of British Parliament who led the largest delegation of European government officials to visit Gaza since the Israeli invasion stated that “the international community is responsible for the siege on Gaza, and we can force an end to it by removing our support. I will make that motion in Parliament, and demand that (British Foreign Secretary) David Milbrand visit the Gaza Strip to see for himself the tragedy our protection of Israel has wrought.” Dr. Arafat Shoukri, Chair of the European Campaign to End the Siege on Gaza (ECESG) that organized the visit to Gaza, stressed that “this delegation is not the first and will not be the last.

The campaign is preparing to sending other delegation, along with actions to keep the issue of the siege on the political agenda in Europe.” The ECESG (www.savegaza.eu) is an umbrella body of non-governmental organizations across Europe that advocates the fundamental right of the Palestinian people in Gaza to live in peace and dignity without being subjected to any form of collective punishment such as the cutting of supplies of food, fuel and medicine or their denial of free access to travel outside Gaza Strip. The ECESG supports the restoration of the inalienable rights of the Palestinian people in Gaza and lobbies for pressure to be exerted on the occupying power to lift its siege and end the human tragedy there. It urges the participation of politicians and non-politicians alike to honor their duty to stop the suffering of one and a half million people trapped in Gaza under the most inhumane conditions.