Bradford: A week of Actions for Palestine 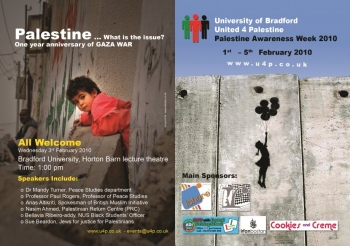 As Palestinians continue to suffer in occupied Palestine, actions and events escalate in the UK and Europe. University of Bradford Union Union of Students (UBU), Palestine Return Centre and Let Palestinians Study are organizing Palestine Awareness Week (PAW) and remembrance in Bradford city.

The PAW starts from Monday 1st February with a live graffiti about Palestine and at 5pm there will be a film showing called: Occupation 101 to students and members of public. The week will include daily events until the 5th of February.

The second day will be a day of cultural festivities where Palestinian food, traditional items, free literature will be provided for people to take away. There will also be presentations of Palestinian cultural history and if possible a performance during lunch. Also there will be stalls for many organisations such as:In the evening, we will be setting up a Video Link with Gaza and Viva Palestina member to talk about their experience while visiting Gaza, where they are expected to detail on the disastrous humanitarian conditions.

The talk will be broken different topics focusing on the history of the conflict and how it is affecting palestinains lives and communities. Each speaker will be given the opportunity to have their say and ideally provide a solution to the issue. It will End with a question and answer session.

On Thursday 4th February Evening, an action (Performance to express you) will be carried out. The event aims to share poems and songs about Palestine

On the last day of PAW we will be hosting a Friday prayers at the University Great hall followed by fundraising for Palestine.

The week of actions come within the 1st Anniversary of Gaza War which has been commemorated worldwide.

It's remarkable that 1.450 Palestinians were killed while over 5000 were injured via the indiscriminate attacks of Israel. The victims were mostly civilians and the attacks left Gaza in rubbles where the infrastructure was indiscriminately destroyed.