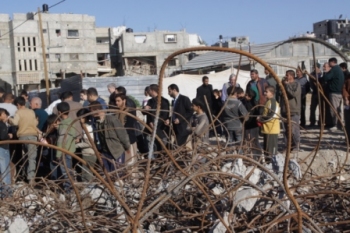 The biggest European Parliamentary Delegation comprised of 55 MEPs and MPs from across Europe visited Gaza between 14 and 18 January 2010. The visit was prepared by the European Campaign to End the Siege on Gaza and The Palestinian Return Centre (PRC).

As Gaza strip has been suffering for years through a deadly siege and devastating War; the living conditions remain disastrous. Both of the organizers believe it is crucial to continue highlighting the devastation and not allow humanitarian disaster to be shrouded to serve a political end.

The visit aimed at exposing to the parliamentarians to the real conditions in the Gaza Strip so they can raise the issue in their countries and national parliaments. They have carried out a very comprehensive tour across the Gaza Strip and met Egyptian officials during their visit. General Director of the Palestinian Return Centre (PRC), Majed al Zeer represented the centre in the visit which included many places affected by the ongoing siege and War.

The delegation visited Isbat Abed Rabu, a small village in the northern eastern Gaza Strip. The area included 5000 houses and industrial buildings. during the last war, hundreds of houses were destroyed in the area. Whilst, couple of hundred were partially damaged due to the continued attacks against the area. Israeli army also killed many people in the area. The delegation listened to

Some of the survivors who witnessed the killing of their families. The delegation met with a family who were obviously living in the most abject of conditions - three or four generation including an old lady who was said to be over 100, living in a tent without washing facilities of any kind and only a makeshift fire on the ground for cooking.

No re-construction or rebuilding was carried out following the attack as Israel continues its devastating siege on the innocent civilians living in the strip.

The MPs and MEPs afterwards moved to Zaitoun area which lies on the southern eastern part of Gaza City. A place which now seems like a ghost town following the destruction and damages to houses and schools. A considerable number of the victims were killed in this place. Amongst, the victims were Al Samouni family. The family were amongst the 100 or so who gathered in the small neighbourhood. During the war, the invading Israeli army targeted the family after sealing the area.

The Samouni family had been subjected to a bloody masscare by the Israeli army. The massacre extended include the brutal shooting of the father as he opened the door to the soldiers. During the shooting other family members were also shot in front of their children, and the remaining were ejected from their homes. In all 29 family members had been killed and this clearly left the survivors, many of them children, severely traumatised. Listening to their harrowing account and judging by who they were its obvious that targeting civilians had no purpose other than to terrorise the population.

The Legislative Council had effectively been disabled as it was exposed to heavy attacks from Israeli F16s. Only a section of one room, in what had obviously been an impressive four-storey building, recently erected with the help of EU money, had survived the bombardment. The delegation visited the destroyed place where numerous political discussions took place with Palestinian MPs and politicians.

The visiting delegation met with the Head of UNRWA in the Gaza Strip, John Ging. Mr. Ging delivered a presentation which made it clear that it is seriously under-resourced and under-funded for the essential work it is doing. According to Mr Ging, UNRWA is in financial troubles at the moment. It might shorten its services due to lack of fund. He said that most of the donors failed to send the money promised yearly.

Official Meetings in Egypt:After leaving the Gaza Strip on Jan. 17, the delegation of MPs met with Ahmed Abu Al-Gheit, the Egyptian Foreign Minister; Dr. Fathi Sorour, the Speaker of the Egyptian People's Assembly; and Amr Moussa, the Secretary-General of the League of Arab States.

Among the issues discussed were the effort to reconcile the feud between the two Palestinian political parties (Hamas and Fatah), the ongoing Israeli siege, and the construction of a steel wall ¬to block off the tunnels that connect Egypt to Gaza. The MPs agreed the tunnels should be closed, but only if the border is opened to allow legal movement of people and goods.