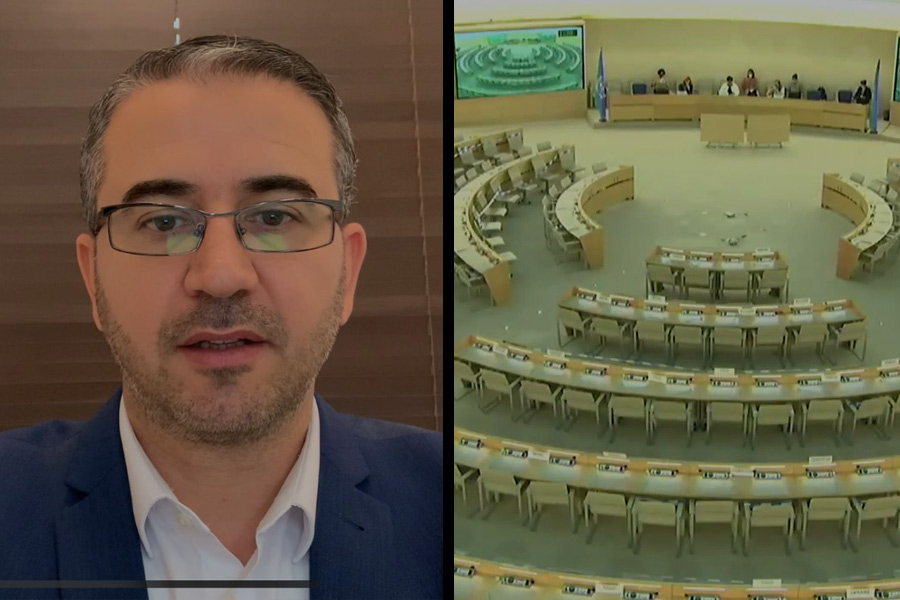 The Palestinian Return Centre (PRC) in London delivered an oral statement condemning Israel’s apartheid-fueled crackdown on peacefully-protesting Palestinian citizens of Israel, as part of agenda Item 9 of the 49th regular session of the UN Human Rights Council in Geneva.

PRC said that due to the most recent popular uprising amongst Palestinian citizens of Israel, referred to as the ‘Unity Uprising for justice & liberation’ and culminating in widespread popular protests in the West Bank and within Israel’s 48 lands, the state of Israel has violently cracked down on all peaceful protestors.

PRC warned that the crackdown seeks to deter Palestinians from fulfilling their innate rights to freedom of speech, expression, assembly, and their fundamental right to protest. Israeli police simultaneously ignore and turn a blind eye to Jewish Israeli citizens forming criminal gangs who are destroying Palestinian homes and businesses and defacing the tombstones of Palestinian graveyards.

“Since May of this year over 2800 Palestinian citizens of Israel have been arrested by Israeli police for protesting”, added PRC.

The Centre called on the members of the Human Rights Council to condemn the Israeli police’s apartheid crackdown on Palestinian citizens merely practicing their fundamental rights, and to immediately call to release all Palestinian prisoners, and to drop all charges against them.

PRC demanded for pressure be placed on the state of Israel to respect the human rights of all its citizens regardless of their ethnicity, religion or political opinion, and to uphold the rule of law when it comes to Jewish-Israeli citizens who commit barbaric hate crimes upon its Palestinian citizens.

Short Link : http://bit.ly/3AnZvow
Tags
Next Article
Document: Sabra and Shatila: A genocide for which the criminal has not been held accountable
Previous Article
PRC Addresses UN Officials, Rights Experts over Dangerous Implications of US-UNRWA Funding Framework on Palestinian Refugees
Most Views
Related Posts