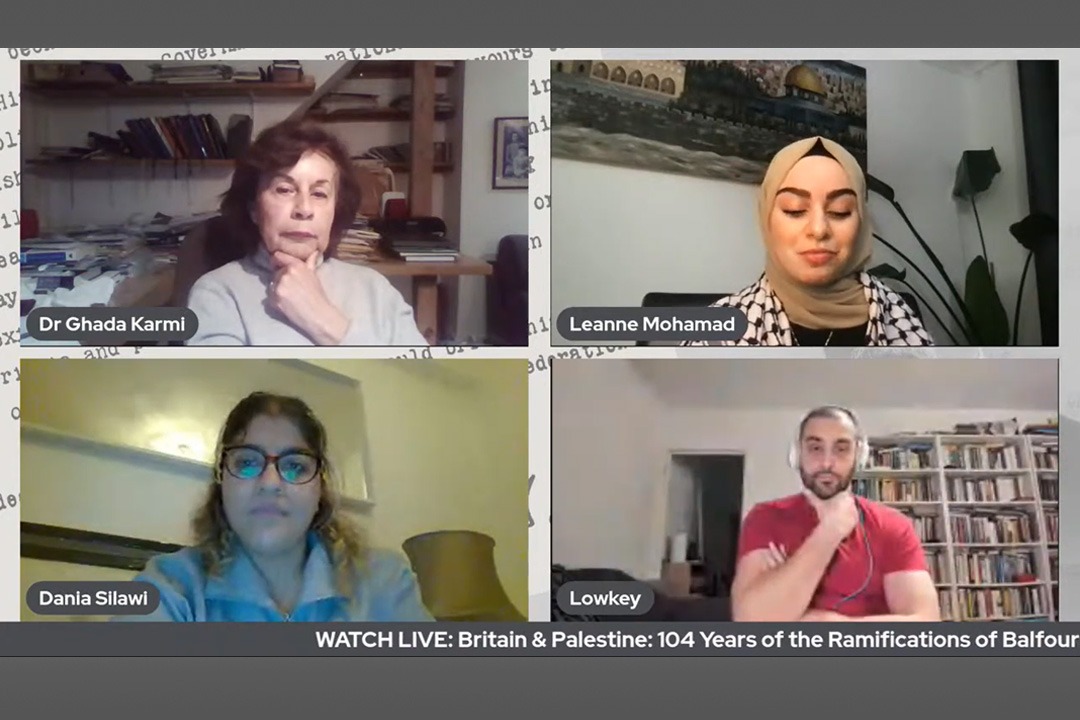 The Palestinian Return Centre (PRC) hosted a webinar marking 104 years since the Balfour Declaration, a pledge made on the 2nd of November 1917. This pledge was a betrayal of the Palestinians, and would ultimately culminate in al-Nakba- the Catastrophe.

The webinar, titled “Britain & Palestine: 104 Years since the Ramifications of Balfour”, featured three speakers: Leanne Mohammed, Lowkey, and Dr Ghada Karmi. The webinar was moderated by Dania Silawi who stated that the discussion would centre on the Declaration’s persisting legacy of human rights violations against the Palestinians.

The first speaker, Leanne Mohammed, was introduced as a British-Palestinian, final year student at King’s College London. Mohammed has an impressive portfolio of public speaking performances such as winning the UK Regional Redbridge Speakout Challenge in 2016, speaking at the university conferences and delivering a speech in parliament.

Mohammed’s segment began with a visceral disavowal of the Declaration, she called it “a day that weighs heavily on every Palestinians heart and the reason why we are resisting today”. She stated that the Declaration was a colonial one which “paved the way for the creation of the settler colonial state of Israel.” She raised two questions, first she asked “what right did Britain have to give away my homeland”. She framed her second question by first pointing out that it was clear from the declaration that Palestine existed, so why then is its existence questioned.

In her summary of the lasting consequence of the Balfour declaration, she highlighted that the Israeli occupation is the longest military occupation in history. She observed that “Balfour was not a declaration but a process.” She drew a parallel between Britain’s collusion with the Zionists in 1948, and the terror inflicted on the Palestinians as a result, with the friendly relationship between the UK and Israel today, and the significant role Western allies play in propping up the State.

The second speaker was the British born, Iraqi activist, historian and renowned rapper, Lowkey. Lowkey’s segment provided an informative panorama of the political events that would lead to the establishment of Israek, he goes on to draw parallels between the relationship between Britain and the Zionist movement back then and their relationship today. He began by outlining three key figures in the Balfour Declaration.

The first was Arthur Balfour himself, Lowkey highlighted the Alien Act, an anti-Semitic act, that made it clear that Balfour did not want Jews escaping pogroms to resettle in the UK. The second figure was Chaim Weissman, who was able to “procure the Balfour Declaration” through his meetings with British politicians. The third figure was Edwin Montague, the only Jewish Member of Parliament, who was dismissed by Balfour as “an assimilationist”. Lowkey discussed how the setting up of separate institutions for the native Palestinians, and the settler community, lead to the apartheid that we see today. Lowkey emphasised that he wants young people to know names like Balfour, alongside with names of the Palestinians who resisted such as Ibrahim Touqan. To further stress the importance of Palestinian resistance, Lowkey pointed out that it is “the longest anti-colonial struggle in the world.”

The final speaker, Dr Ghada Karmi, is a Palestinian doctor, author and academic, who has written extensively on the Palestinian issue in publications such as the Guardian, she is former lecturer and research fellow of Arab and Islamic Studies at the University of Exeter. Her widely acclaimed memoir, “In Search of Fatima”, documents her family’s displacement from Palestine. In the webinar, she touches on this topic and discusses how she is a “direct victim” of the Britain’s collusion with the Zionist movement.

To begin with, Dr Karmi brings to our attention the peculiar nature of the Declaration, she labels it “an odd document”, noting that it takes the form of a letter, so its “status is very unclear”. To underscore the absurdity of this document, Dr Karmi notes that the British were not governing Palestine during this period. She notes that the Declaration itself is of “little import”, however, when coupled with the events that succeeded the declaration- “the nurturing of the Zionist movement”- she illustrates that the role of British was essential to the establishment of Israel: “But for the role of Britain, there would be no Israel today.”

Dr Karmi addresses the question of Britain’s motivations, she suggests that perhaps the British though a State of Israel would be a geopolitical advantage. As well as geopolitical advantages, Dr Karmi discusses the interests of the Christian Zionists. However, Dr Karmi states the motivations of the British are not as important as the consequences of their “nurturing of the Zionist movement.”

All three speakers emphasised that Britain’s role was essential to the establishment of the State of Israel, and by extension, bears responsibility for the terror that ensued during the Nakba, as well as the structure of Apartheid that Israel still operates on until this day. Britain’s current friendliness with the State of Israel is a continuation of Balfour and its historic nurturing of the Zionist movement.