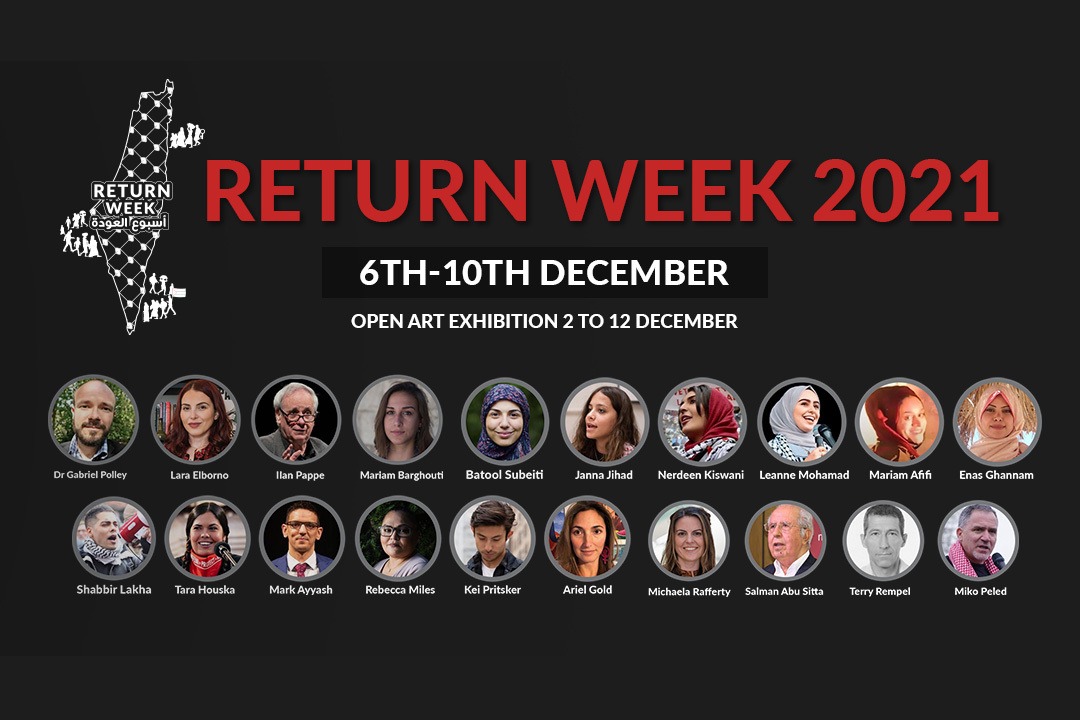 The Palestinian Return Centre (PRC) will be hosting its second annual 'Return Week', with efforts fully underway to amplify the Palestinian refugee community's call for their right of return.

The event marks 73 years since the establishment of UN Resolution 194, which outlines the legality of the Palestinian right of return.

The event will be officially inaugurated on Monday, December 6, 2021.

A distinguished panel of speakers will inaugurate the ‘Return Week’. The opening webinar will underscore Palestinians’ commitment to their right of return to their homeland. It will be chaired by Dr. Gabriel Polley, a doctoral researcher at the European Centre for Palestine Studies, University of Exeter. Speakers include Ilan Pappé, a professor with the College of Social Sciences and International Studies at the University of Exeter; Lara Elborno, a Palestinian-American international lawyer and activist based in Paris, though her family originally hails from Gaza and Yaffa; and Mariam Barghouti, a Palestinian writer and researcher based in Ramallah.

The second webinar of Return Week is entitled The Interconnected Struggle: Palestine & the World. Speakers include Ariel Gold; the National Co-Director of CODEPINK and a U.S. Middle East foreign policy expert. She holds a bachelor's degree in Policy Analysis and Management from Cornell University and a masters degree in Social Work from State University of New York, Binghamton; Professor Mark Ayyash, who is the author of A Hermeneutics of Violence (UTP, 2019). He was born and raised in Silwan, Jerusalem, before immigrating to Canada, where he is now an Associate Professor of Sociology at Mount Royal University; and Rebecca Miles, Executive Director of the Nez Perce Tribe. Miles was elected to the Nez Perce Tribal Executive Committee (NPTEC), the governing body of the Nez Perce Tribe, in May 2004. She was chosen Woman of the Year by the Washington State University Alumni Association in March 2006.

The third webinar is entitled “The Generation that Will Return”. Contributions will be delivered by Nerdeen Kiswani, a Palestinian organizer from NYC. She is the founder and chair of Within Our Lifetime - United for Palestine, a community based Palestinian led organization whose goal is to revitalize the revolutionary spirit of the Palestinian community abroad in pursuit of a free homeland; Enas Fares Ghannam, holder of a Bachelor's degree in English, professional diploma in translation, and Master's in translation. She is the project manager of the "We Are Not Numbers" program, which was originally founded to tell the stories behind those who were killed or were injured by Israeli occupation forces; and Leanne Mohamad, a British Palestinian born and raised in London and a current final year student at Kings College. She won the UK Redbridge Regional “Speak out” challenge in May 2016 after giving an impressive performance to enthusiastic applause.

Thursday 9th December 2021 Artists will be devoted to an Art Exhibition entitled Visualising Return. The list of artists includes Sliman Mansour, Malak Mattar, Mohammed Saba’aneh, Maher Naji, Halima Aziz, Jasmine Hawamdeh, Safaa Odah, Hadil Alsafadi, Dalia Elcharbini, and Fayez Elhasani. Speaker at Reception will be Naz Shah, who has served as Labour MP for Bradford West since 2015. Recently in the December 2019 General Election, Naz received 33,736 votes, which equaled a 76.2% majority, retaining her seat. Prior to being elected, she was the chair of the mental health charity, Sharing Voices Bradford. After the general election in 2015, Shah became a member of the Women and Equalities Select Committee.

The ‘Return Week’ will culminate in a closing Panel entitled “73 Years of UN Resolution 194”. Onboard will be Dr Salman Abu Sitta, who was born in 1937 in the Beersheba district of Mandate Palestine. He is an engineer by profession and a researcher most known for his ground-breaking project mapping of Palestine in 21st, 20th and 19th centuries and developing a practical plan for implementing the Palestinian right of return of Palestinian refugees; Miko Peled, a writer and human rights activist born and raised in Jerusalem. He is considered by many to be one of the clearest voices calling for justice in Palestine, support of the Palestinian call for Boycott, Divestment and Sanctions, (BDS) and the creation of a single democracy with equal rights on all of historic Palestine; and Terry Rempel, a Canadian-based independent scholar currently residing on Treaty 6 Territory, a traditional gathering place for diverse Indigenous peoples. A graduate of the University of Exeter, Rempel holds a doctorate in philosophy with a specialization in Middle East politics and was a founding member of BADIL Resource Center for Palestinian Residency and Refugee Rights in Palestine.

This year’s event is special in form and content. It gives a great deal of attention to artistic visualizations of the inalienable Palestinian right of return. Besides of the webinars that will be held as part of the event, a ten-day artistic exhibition will be inaugurated on December 2nd at P21 Gallery in London and is slated to be wrapped up on December 12.

'Return Week', in its second edition this year, is held annually by the PRC to raise awareness amongst the international community about the inalienable right of Palestinian refugees to return to their homeland. Every year, a plethora of activists, academics, and political commentators take part in webinars/seminars organised by PRC as part of the 'Return Week' in an attempt to underscore the Palestinian refugee plight and discuss pro-Palestine outreach policy and advocacy mechanisms seeking to enable Palestinian refugees to exercise their right of return through international laws and conventions